It wasn’t long ago that Harrison Ford starred in his first animated voice role, that of a protective dog in The Secret Life of Pets 2. Ford isn’t the guy we typically associate with family-friendly movies like that, and yet Disney’s The Call of the Wild finds him paired up with a CGI canine who is undoubtedly the star of the show. To Ford’s credit, he gives the chief human role all that he can considering that he’s playing second-fiddle to an animated pet. But for a movie that’s all about learning to embrace one’s natural instincts, the decision to rely so much on computer technology was a misstep.

The Call of the Wild is based on the classic Jack London novel from the early 20th-century, which has been adapted multiple times. For very good reason, it’s a classic tale of survival told through the eyes of Buck, a domesticated, very spoiled St. Bernard who is dognapped from his comfortable existence and shipped out to the Yukon during the Gold Rush. There, he experiences the wilds of nature, faces dangers he’s never seen, and encounters the good and bad side of men, eventually learning to embrace the wild animal within. It’s a dark story, which made the decision by Disney to bring it over from 20th Century Fox somewhat unusual.

The answer?  Exaggerate Buck and all of the animals in such a way that they might as well be cartoons. Essentially a comedy for 80% of the time, The Call of the Wild finds Buck crashing his way through his home like a bull in a china shop, upsetting the locals and his family. It’s this drawing of attention to himself that gets Buck stolen away to begin with, packed in a crate and shipped off to Alaska where powerful dogs are at a premium. It’s there that Buck literally bumps into John Thornton (Ford), a lonely man looking to escape from a troubled past.  They instantly form a connection, but Buck’s journey is one full of hardship, mostly at the hands of evil men.

Buck’s initial trip is met with violence, as his handlers beat and threaten him into submission. It’s there that Buck learns to be wary of people, something he never had to deal with in his comfortable early life. He’s eventually sold into an Alaskan sled team run by the kind-hearted postman Perrault (a welcome Omar Sy) and the wary Francois (Cara Gee). They teach Buck to be part of a team, to be one with a pack, although it’s also here that he learns to be fearful of his own kind, as well. Ultimately, Buck ends up in John’s possession, who comes to his rescue from the greedy, malicious fop Hal (Dan Stevens). He believes John is hiding the location of a secret goldmine, and will stop at nothing to find it. 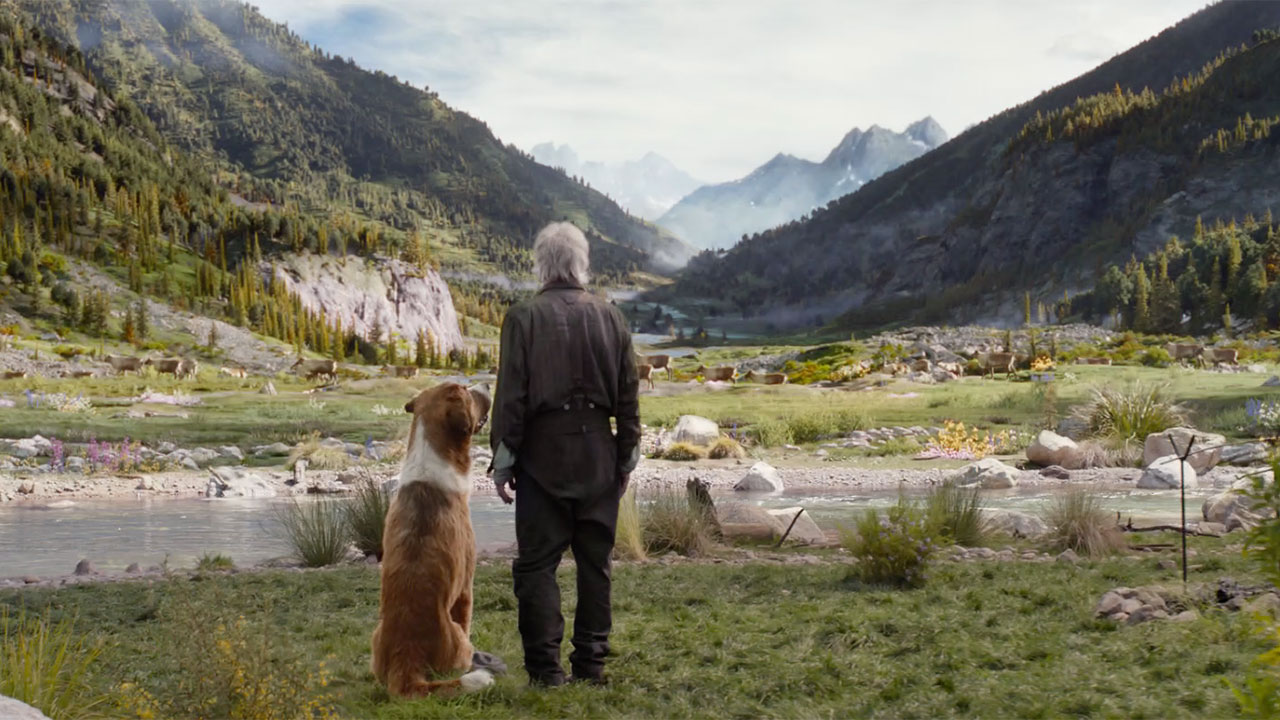 While I understand using real animals and locations makes for a more difficult, more expensive shoot, the entire thing being done in CGI is a serious problem. It’s hard to take anything seriously with Buck’s overemphasized facial expressions and mannerisms, while the wilderness, this uninhibited place where Buck is meant to lose himself to the “call of the wild”, is too glossy and way too tame. Chris Sanders is a filmmaker best known for his animated work on How to Train Your Dragon and The Croods, but his expertise doesn’t fit with this savage tale of survival and evolution, which has its edgiest aspects sanded down.

On the other hand, Ford is really doing some unexpectedly strong work here when he easily could’ve phoned it in. He imbues John Thornton with an emotional heaviness that you can tell he’s been carrying for far too long. Through connecting with Buck, we see him drop some of the armor and learn to open up again. I would almost say the relationship is similar to Han Solo and Chewbacca, but it isn’t quite on that level! Ford and motion-capture legend Terry Notary work side-by-side here and they have us believing in John and Buck’s heartwarming friendship. At least The Call of the Wild makes that part of the story feel natural. It’s just too bad so much else doesn’t.