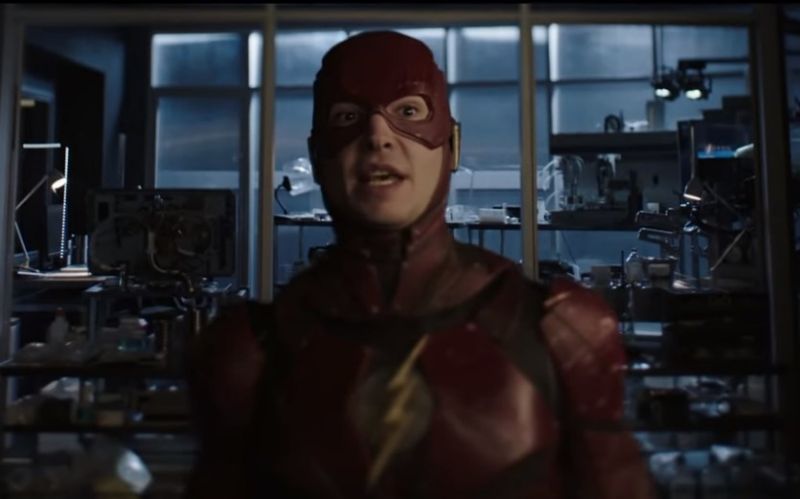 So for a few short moments, I wish I had been watching CW’s Crisis on Infinite Earths crossover. Don’t message me saying how good it is, my interest is zero except for this one incredible moment when the Arrowverse connects to the DCEU via Ezra Miller’s version of The Flash.

The big event happened just as the multi-dimensional chaos appeared to have been solved. Grant Gustin’s Flash returned to STAR Labs in his superhero gear, only to find Ezra Miller’s Flash waiting for him, clearly trapped between dimensions or something. The two exchange confused greetings, with Miller’s scarlet speedster asking if this was a cosplay thing and if Gustin needed an autograph.  That’s when Gustin reveals that he, too, is The Flash, which seems to boggle Miller’s mind as if his version of the hero had never thought of that name before.

The two then get awfully touchy-feely admiring their “breathable” costumes, which is maybe the least meaningful thing that happens during this encounter. Because it’s then that Gustin’s Flash begins to question how this could be happening, and Miller’s speedster gets confused…

Miller sounds like he has no clue about the Crisis event, which means it must not have impacted the DCEU. As he begins to fade away, Miller’s Flash says “I told Victor this is possible,” a clear nod to Victor Stone aka Cyborg, who we’re probably never going to see in another movie again. At least not for a long time. At least he gets a mention here.

Could this lead to future crossovers between the TV shows and movies? Warner Bros. is probably open to this now more than ever, but what happens when the TV versions are more popular than the movie ones?