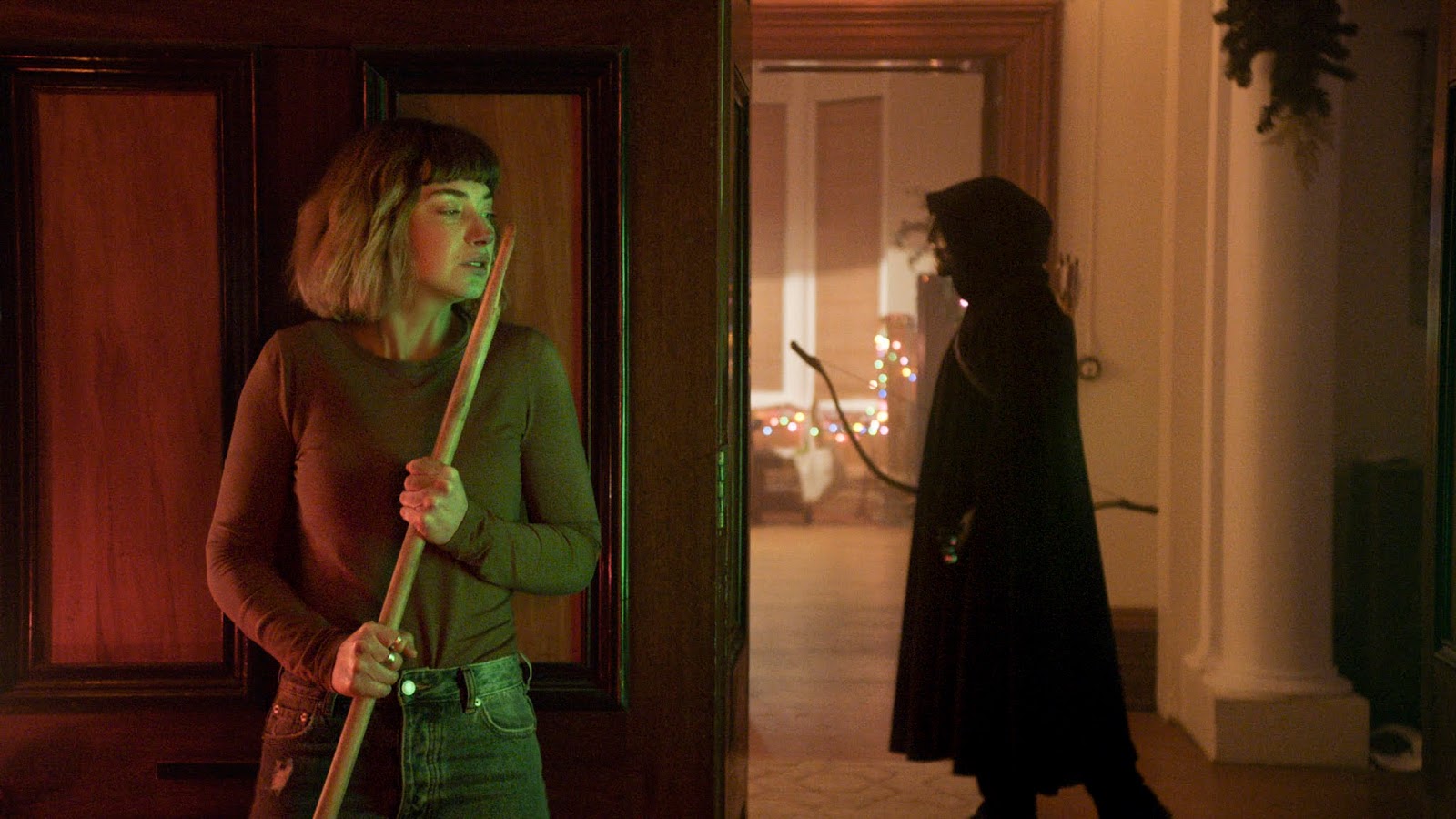 Bob Clarke’s 1974 slasher “classic” Black Christmas was particularly progressive for its time. It centered on a young woman dealing with her decision to have an abortion, plus a boyfriend who nowadays would be a textbook example of why the #MeToo movement exists. The film’s feminist ideals made it unique for the time, but in an era in which female-driven horrors have revitalized the genre, they aren’t enough of an inspiration for Sophia Takal’s remake which is too busy offering up clichés and talking points to deliver any scares.

As an immediate homage to its predecessor (I’m ignoring the awful 2006 remake), Black Christmas begins with the icicle stabbing of a sorority sister on her way home for the Christmas holidays. Other women at the formerly all-male now-integrated Hawthorne University are sticking around for the annual talent show and “Orphans’ Dinner”, one of those being Riley (Imogen Poots), a “big sister” of the Mu Kappa Epsilon sorority. Riley is struggling to cope with a past sexual assault committed years earlier by Brian (Ryan McIntyre), a big wig of the powerful Delta Kappa Omega fraternity. The cops didn’t believe her story then, and Riley has been keeping to herself ever since. Inspired by her firebrand pal Kris (Aleyse Shannon) and sorority friends, Riley is encourage to take part in a sexy talent show number that exposes Brian’s predatory nature. The toxic dudes of Delta aren’t at all happy, and soon after the ladies begin receiving ominous text messages from the school’s long-dead founder Calvin Hawthorne, a man known for his racism and misogyny. Kris led a petition to have a Hawthorne bust removed, and to have a shady Literature professor (Cary Elwes) fired for his all white-male curriculum. When some of the women in Mu Kappa start turning up dead, it isn’t hard to figure out why they might be targets. 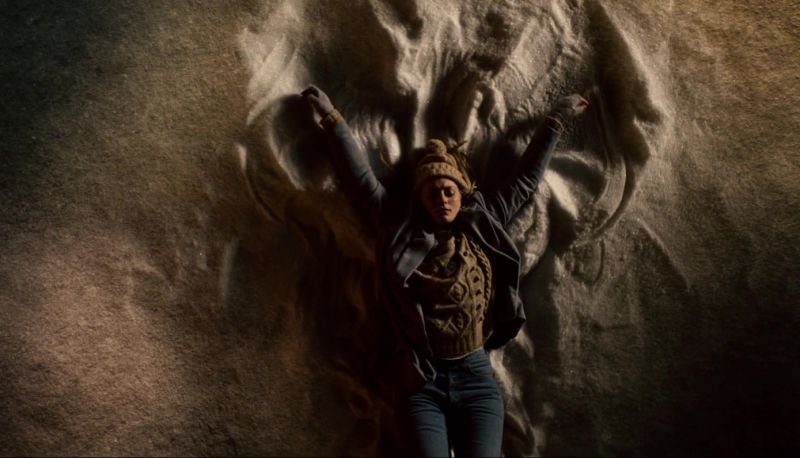 And that’s just one major problem with Black Christmas; it has all of the subtlety of a snow shovel. The script co-written by Takal and April Wolfe is heavy on messaging, lots of attacks on the white male patriarchy, rape culture, and the toxic brew that is life on campus colleges. Frequent nods to sisterhood are offered at such a clip that there’s little room for anything else. Not that we should expect much character development in a slasher flick, but at the very least we are meant to care something for Riley because of what she previously endured and must now endure again as she’s stalked by, presumably, another guy with a violent streak. Poots, who fought back against similarly malignant men in the far-superior Green Room, never seems comfortable in the role. At first, I thought maybe she was just embodying Riley’s stunted attempts to cope with prior trauma, but it never really goes away. Poots is a terrific actress at projecting strength, but it never comes across convincingly here, even when she gets the chance to do so. Others in the cast aren’t especially memorable, either, including Caleb Eberhardt as the dorky love interest, Landon. He’s so uninteresting they don’t even bother to make him much of a red herring. Actually, there are no red herrings.

What’s surprising is how conventional Black Christmas is, taking on the tone and tenor of typical slasher movies. While the movie has been pushed as a “final girls turn the tables” payback flick, that’s not what this is most of the way. Kills occur precisely when we expect them to, and whether it’s a woman or man on the receiving end we can tell they’ve been toned down for a PG-13 rating. Cinematographer Mark Schwartzbard’s snowy exteriors and creaking, dimly lit house interiors build up a great deal of suspense only to have the action fall flat time and time again. 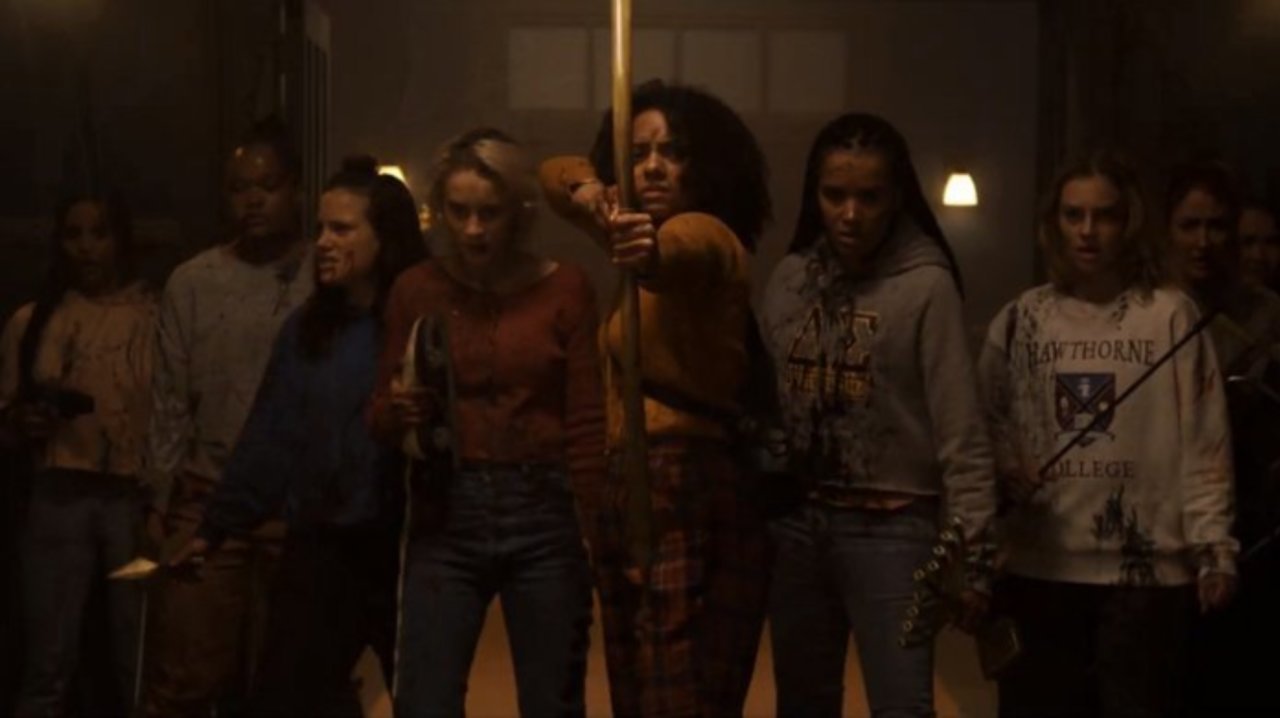 A supernatural element introduced late in the game is problematic for disrupting the real-world messaging, but also for just being ridiculously lazy. It all but absolves the killer for their actions, and brings Black Christmas to such a dead end that it can’t even be bothered for any kind of coda. There’s no final point to make, nothing of substance to reflect on what this movie is supposed to mean at this moment in time, when timeliness is all it’s had going for it from the beginning.