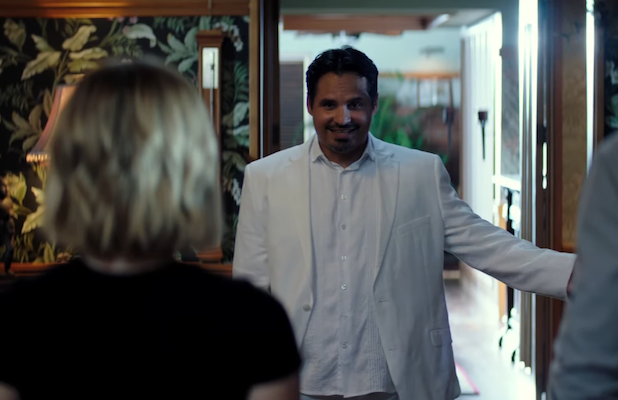 Come to Fantasy Island and see your fondest wishes come to life! That was the tantalizing hook of the classic 1970s TV series led by Ricardo Montalbán as the mysterious Mr. Roarke and Hervé Villecheize as his loyal (and more famous) assistant Tattoo. Most of these fantasies turned out differently than expected, a “be careful what you wish for” message delivered at the end of many episodes, but leave it to Blumhouse to take that idea and crank it up to eleven.

Fantasy Island is back in a new film from Blumhouse and Truth or Dare director Jeff Wadlow, and it’s basically a full-blown supernatural horror. Michael Pena takes over as the new Mr. Roarke, who grants the secret dreams of those who pay visit to his remote tropical resort. The rest of the cast is led by Lucy Hale, Maggie Q, Austin Stowell, Portia Doubleday, Jimmy O. Yang, Ryan Hansen, and Michael Rooker.

I love this. While the TVseries was a bit beyond me as a kid, growing up I began to appreciate it for being different than the many crime or romance shows that surrounded it. Later episodes got quite dark and leaned heavier into the paranormal, and that seems to be where Blumhouse is going here. It reminds me of the Wishmaster franchise, and that I say as someone who has a fondness for those movies. I also like Wadlow for this. Truth or Dare was better than it had any reason to be, and he also directed the little-seen Cry_Wolf which has always been a favorite.