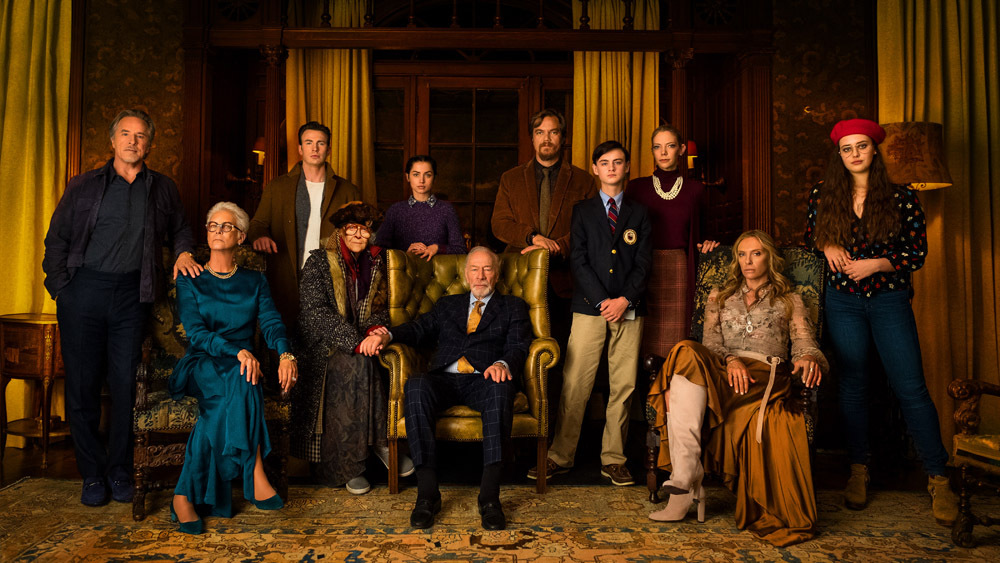 Bridging the gap between old school whodunnits with a contemporary spin has been a favorite practice for Rian Johnson, literally from his first feature-length film, the high school noir Brick. But that was 14 years ago (!!!!) and times have changed, language has changed, and certainly Johnson has been through a lot more, including a brush with angry sci-fi fanboys who still regularly skewer him over social media. All of that comes into play with his snappy, clever, and downright funny whodunnit Knives Out, which I think may have the best ensemble we’ve seen assembled all year.

The murderee in Johnson’s murder mystery is legendary crime author Harlan Thrombey (Christopher Plummer), who is found dead, his throat slit, on the night of his 85th birthday. With his death, it’s like somebody opened up the hyena cages at the zoo. A feeding frenzy is about to ensue, with each of the contemptible members of his family eager to feast on an inheritance they feel is rightfully theirs. In positively Trump-ian fashion, the Thrombey clan’s “built from the ground up, do-it-yourself” image is a load of bullcrap, filled to the brim with entitlement and privilege.  There’s hard-nosed daughter Linda (Jamie Lee Curtis), who did manage to build her own successful business…with the help of a sizable loan from dear ol’ daddy. Her worthless, bigoted, husband Richard (Don Johnson) is an adulterer, and bad at keeping it secret. Harlan’s son Walter (Michael Shannon) is joined at his father’s hip as a publisher, but is angry he won’t let Netflix adapt any of the bestselling novels even though that’s where the real money is at. Walt’s son Jacob (Jaeden Martell) is a social media-obsessed alt-right youth who probably worships at the altar of Milo Yiannopoulos and hates The Last Jedi because women, while Harlan’s granddaughter Meg (Katherine Langford) stands as Jacob’s more progressive counter. Meanwhile,  widowed daughter-in-law Joni (Toni Collette) prances around like a flower girl, irritating others and sucking on the teet of Harlan’s generosity.

Part Agatha Christie, part The Pink Panther, Knives Out is driven by its comically devious, delusional array of suspects and its southern fried detective, the colorfully-named Benoit Blanc. Played with a syrupy drawl by Daniel Craig (recalling his Logan Lucky role), Blanc is a private investigator who steps into this pit of vipers with an unknown agenda. He doesn’t believe for a second that Harlan committed suicide, which is the popular theory among, conveniently, a mansion full of possible murderers. The one exception is the sweet, good-natured Marta (Ana de Armas), the Thrombey’s South American caretaker and Harlan’s closest confidante. If there’s a genuine heart to be found in this rotten family it’s her. Whereas the others seem physically incapable of telling the whole truth, Marta literally can’t tell a lie without projectile vomiting all over the place. It’s a ridiculous, seemingly mystery-breaking gift that Johnson never shies away from. Instead, he keeps finding new ways for Marta’s “super power” to shift the investigation in different directions.

More importantly, what Marta can do is never more important than what she represents. Knives Out may start as a witty detective yarn, but it’s constantly reshaping itself until it comes to be about so much more. Marta is  the one who, just by her presence, reveals the rank hypocrisy within much of the Thrombey family. Literally, the first time she’s mentioned it’s as someone refers to her as “the help.”  Richard cares so much about her, we see one of the seemless flashbacks of him happily gesturing for Marta to join Harlan’s birthday bash, but at the same time he never remembers her country of origin. There’s a racist immigration rant that follows later, and a  timely “Hamilton” reference (“Immigrants, they get the job done.”) that says so much about the way wealthy, white elites are spoon fed their shallow values through popular culture. Of course, the corruption caused by tremendous wealth is also a core theme, exemplified by the perfectly-named Ransom, played with venomous glee by Chris Evans, never looking happier to have ditched that blue suit and star-spangled shield. As Harlan’s slacker grandson, Ransom is the only one who has ditched all pretenses. He doesn’t want a job, hasn’t looked for one, and is more than happy with his status as the family’s wise-cracking black sheep. He really doesn’t take to Blanc, either, butting heads with “Foghorn Leghorn” on multiple occasions.

Proving his mettle as a writer of crime fiction, Johnson keeps the audience on their toes, repeatedly rearranging the players and the stakes like a good roll of the dice. Utilizing a terrific cast (de Armas is the surprising breakout in this all-star cast, LaKeith Stanfield sadly wasted) and production design ripped from a game of Clue, Knives Out aims to be fun more than meticulously detailed. Johnson wisely chooses to give us a satisfying, enjoyable mystery than take giant swings with a shocking twist finale. Some may find that disappointing, but I’ve always found that a good mystery is less about whodunnit than whydunnit. The path to “why” shows Johnson to once again be a master of his craft, making films that honor classic Hollywood while speaking in today’s voice. The haters will continue to pile on because that’s what they do, but Johnson continues to up his game and making movies his own way. The reputation he’s got as one of today’s best filmmakers is well-earned, and that’s something Harlan Thrombey would appreciate.