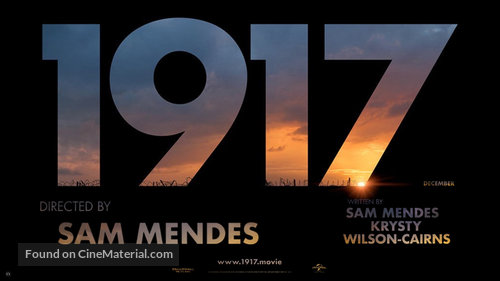 If there’s a list of overdone film settings World War II must be near the top of the list. Conversely the originator of global battle, World War I aka The Great War doesn’t even register on that list. I guess it’s the cinematic evil of the Nazi’s causing the difference but when it comes to drama and heroism WWI is an untapped well of epic-ness (not a word, using it anyway).
Sam Mendes upcoming film 1917, which has a crazy strong cast in Benedict Cumberbatch, Colin Firth, Andrew Scott, Richard Madden and even fellow GOT alum Dean-Charles “King Tommen” Chapman, tells the story of two young soldiers given an impossible assignment to deliver a message deep into enemy territory. The trailer for the film looks amazing and seems to really capture the chaotic claustrophobic carnage of trench warfare. This war was the worst of human aggression, so much so that it cased the creation of the Geneva convention to prohibit the cruel and unusual forms of death dealing that became popular on the fields of Europe. Sam Mendes, who showed how he handles kinetic and hard hitting action in Skyfall seems to be on his game as well.

Check out the trailer below and let us know what you think in the comments.