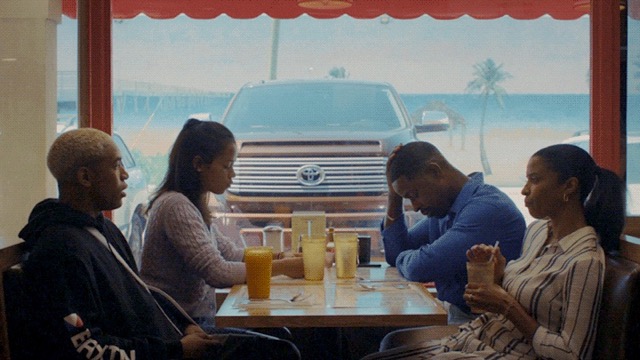 Trey Edward Shults has used the festival circuit to his advantage through his first two movies: Krisha and It Comes at Night.  The breakout success he’s already achieved had his latest as one of the most anticipated movies to hit Telluride, and the response to the South Florida drama Waves has indeed been tremendous, which is why A24 are getting a jump on promoting it early with a debut trailer.

Waves is a family drama surrounding a suburban African-American family in South Florida as they cope with tragedy, grief, and forgiveness. The film is led by This is Us star Sterling K. Brown, along with rising star Kelvin Harrison who had a small role in Shults’ It Comes at Night, and a stunning turn earlier this year in Luce. They’re joined by Lucas Hedges, Neal Huff, Clifton Collins Jr., Alexa Demie, and Tony Award-winning Hamilton actress Renée Elise Goldsberry.

SYNOPSIS: Set against the vibrant landscape of South Florida, and featuring an astonishing ensemble of award-winning actors and breakouts alike, Waves traces the epic emotional journey of a suburban African-American family—led by a well-intentioned but domineering father—as they navigate love, forgiveness, and coming together in the aftermath of a loss. From acclaimed director Trey Edward Shults, Waves is a heartrending story about the universal capacity for compassion and growth even in the darkest of times.


Waves will now make a splash at TIFF before an eventual release which A24 says is “coming soon”. How soon? I’m guessing in time for awards voting.