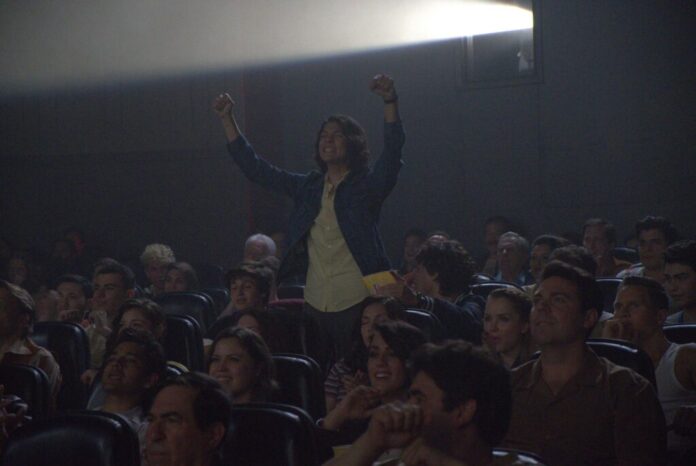 May 28th, 1982. That date might not mean anything to you, but it apparently meant a lot to writer/director James DeMonaco and the people of the Staten Island neighborhood where he grew up. Because that date was the arrival of Sylvester Stallone’s Rocky III, where the Italian Stallion overcame grief and personal loss in a comeback story for the ages. For the Italian-American community in DeMonaco’s first film outside of his blockbuster The Purge franchise, Rocky is akin to a Christ-like figure, a hero of heroes, and God help anyone who dares question his manhood.

This is the Night is DeMonaco’s most personal film, a coming-of-age story that is never anything less than sincere, even as the filmmaker takes on so much that only certain aspects truly resonate. One of those is the genuine passion DeMonaco feels for Rocky III, with its release not just the centerpiece of the film but the narrative highlight and thematic guiding light. The story follows the blue-collar Dedea family, each with their own heavyweight title match with life that needs to be won. Teenaged son Anthony (Lucius Howard) lives his life in fear of what others think of him, especially the tough-guy greasers who are everywhere. He longs to tell his crush Sophia (Madelyn Cline) how he truly feels about her, but of course, is too scared…of her bullying boyfriend. Patriarch Vincent (The Purge vet Frank Grillo) runs a struggling Italian restaurant and party hall, and owes a bunch of money to mobster Frank Larroca (Bobby Cannavale), who can’t help pushing his weight around, especially when it comes to Frank’s long-suffering wife Marie (Naomi Watts). If there’s anything remotely controversial it has to do with eldest son Christian (Jonah Hauer-King), who like all of the other boys idolizes Rocky’s masculinity and machismo. But at the same time, he’s struggling with his sexual identity and desire to crossdress, a feeling that will get him ostracized by friends and surely by his father.

DeMonaco is tackling a lot, including Anthony being on the run from an entire town who thinks he called Rocky Balboa a “pussy” at the end of the film. There are many parts of This is the Night that could have made separates movies unto themselves, and they don’t get the attention they deserve here. The best sequence by far is the actual screening of it  Rocky III, seen from the awed, tearful, jubilant reactions of the audience. If you’ve seen that boxing classic it will undoubtedly have more impact, but what’s cool about it is how DeMonaco frames it so it could be any movie of significance to your own childhood. His love of cinema shines through.

Appropriately enough, This is the Night gives everyone in the Dedea clan their moment to shine, emboldened by Rocky Balboa’s own battle to overcome the odds. Anthony’s is given the most screen time, but it’s Vincent, who literally slugs it out with his nemesis to earn the respect of his son and prove his worth to his wife, that is the most exciting. Christian’s story has the most emotional impact, however, as Hauer-King is superb at depicting someone struggling with who he is and how it clashes against the masculinity of his culture. As basically the only meaningful female character in the film, Watts doesn’t get much to do but be part of other males’ stories, but she’s good as the only one who understands what Christian is going through.

I don’t know if DeMonaco was given the opportunity to do This is the Night because of the millions he’s made with The Purge, but it’s clear this is a passion project. The nostalgia and personal touches run thick, and anyone who ever had to plow through the newspaper and wait in long lines outside of a movie theater to get tickets will remember that feeling. This is an indulgence and the sentimentality gets away from DeMonaco at times, but it’s a genuine, feel-good story worth experiencing for the memories it could bring up in you, too.

This is the Night is currently playing at Angelika Theaters and on digital.