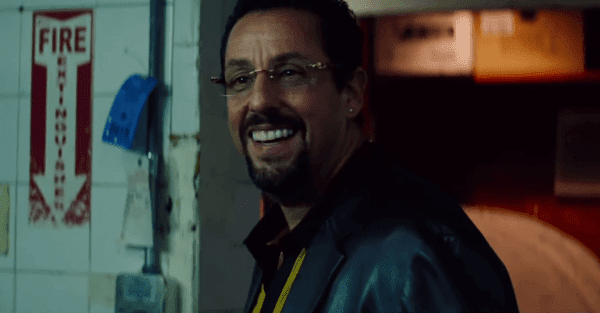 You couldn’t miss the high praise coming out of TIFF for the Safdie Brothers’ latest, Uncut Gems. The reviews were glowing, and that went double for the performance of Adam Sandler, who apparently shines like the diamonds his get-rich-quick character hustles on the gritty streets of New York’s diamond district. But is the film, and Sandler for that matter, really that good?

A new trailer definitely looks like Sandler has found one of those rare roles that remind us of the actor he could be. I mean, he gets to shove around The Weeknd in this piece of footage here, which already means it gets high marks in my book. Sandler plays Howard Ratner, who gambles, hustles, anything slippery he can think of in the pursuit of higher stakes. If it went well for him, this wouldn’t be much of a movie, would it?

The film co-stars Lakeith Stanfield, Idina Menzel, Julia Fox, Kevin Garnett, Judd Hirsch, Eric Bogosian, and more, but clealy this is an Adam Sandler joint with some already predicting some love for the guy who was most recently seen in Murder Mystery.  The swings, the extreme highs and lows of Sandler’s career, are like a gambler riding the streaks as they come.

SYNOPSIS: From acclaimed filmmakers, Josh and Benny Safdie comes an electrifying crime thriller about Howard Ratner (Adam Sandler), a charismatic New York City jeweler always on the lookout for the next big score. When he makes a series of high-stakes bets that could lead to the windfall of a lifetime, Howard must perform a precarious high-wire act, balancing business, family, and encroaching adversaries on all sides, in his relentless pursuit of the ultimate win.

Adam Sandler Confirms Reunion With The Safdie Bros. On A New Film