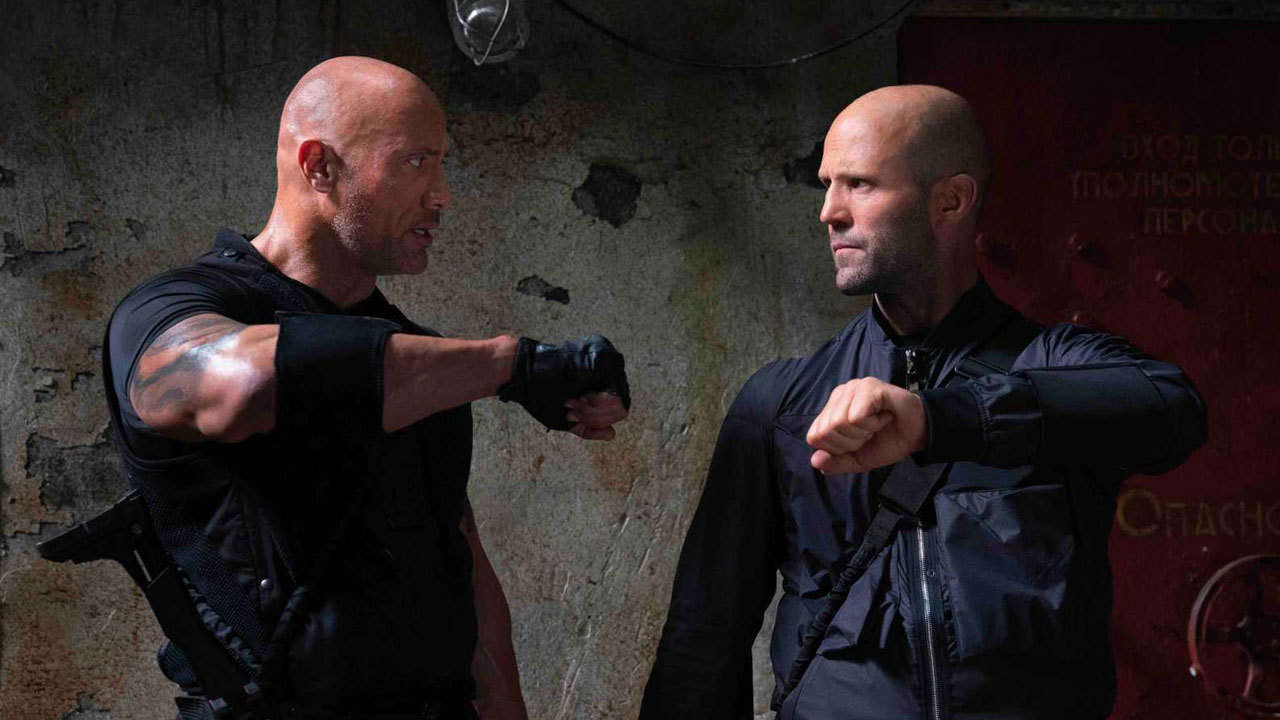 Captain Marvel who? The Avengers wha? Deep down I think we all knew the movie with the biggest muscle-bound superheroic logic-defying action wouldn’t have any actual superheroes in it. It would be Hobbs & Shaw, which is like peak Fast & Furious batshit insanity running on pure superfuel. Subtracting Vin Diesel’s bald bruiser for the clean-shaven domes of Dwayne Johnson and Jason Statham, this gigantic summer spectacle is powered by the excess testosterone and charisma of its two stars.

I know this gets repeated a lot, but the franchise has undergone an incredible amount of change since 2001’s Fast and the Furious. What started as a generic street racing drama has morphed into a blockbuster Mission: Impossible-style franchise where nothing is EVER too crazy to be imagined. Need a high-speed car chase against a torpedo-armed submarine…on ice?  Sure, why not? Remember the simplicity of just having the hero walk away from an explosion? Those days are long gone. This franchise has killed them and replaced them with dudes who can lasso a speeding jeep and a soaring helicopter with their bare hands. It used to be that winning the big race was all  that mattered, but Hobbs & Shaw features a cybernetic supervillain with a plot to unleash a deadly virus that will leave only the strongest standing.

If you’re concerned about the expanded scope of these movies, then you probably aren’t going to see Hobbs & Shaw, anyway. By now you’re either riding shotgun for this absurd trip or you ain’t, but damn you’ll be missing out. Picking up on the oil ‘n water partnership seen in Fate of the Furious, body oil brickhouse Agent Luke Hobbs (Johnson) is forced to team up with ex-villain Han’s murderer Deckard Shaw (Statham) against enhanced super-soldier Brixton (Idris Elba), or “Black Superman” as he’s quite correctly referred to. This dude is basically a Marvel villain who walked onto the wrong set; he can bend steel, deflect bullets, and toss Hobbs and Shaw around like they were a couple of skinny pencil-neck geeks. But his deadly robo-rampage won’t stop until he captures Shaw’s sister, Hattie (Mission: Impossible-Fallout’s Vanessa Kirby), an MI6 agent who is trying to keep the virus from being unleashed.

But that’s all just useless plot stuff. Pfft! Who needs it? Nobody is here to worry about the plot. We just want to watch Johnson and Statham banter and kick ass, both of which they do with reckless abandon. Shaw takes some sweet shots at Hobbs, frequently referring to him as a bull in a china shop, or referring to his selection of tight outfits…”Spray on”, he cracks at one point. Hobbs gets revenge in his flirtations with Hattie, who proves to be just as much of a badass as he is. This movie doesn’t just belong to Johnson and Statham, but Kirby who I think could be an action star in the making. There are only a handful of women who do anything in this movie, but Kirby stands on a level playing field with her male counterparts.

Behind the camera is Deadpool 2 director David Leitch, and just as he did with that film, John Wick, and Atomic Blonde, the physical violence has been cranked up to a ridiculously over-the-top level. An incredible McLaren car chase through London features lots of ricocheting vehicles, Brixton pulling all sorts of graceful motorcycle maneuvers and even getting hurled through a bus. Sticking with the John Wick approach to combat, the fights between Hobbs, Shaw, and Brixton are both brutal and beautiful, with the film barely taking a moment to breathe before the next big setpiece. It does get exhausting, and that pace can’t be sustained all the way through. By the time Hobbs and Shaw have barely escaped Brixton’s clutches for maybe the third time, the movie is in serious need of a jumpstart.

Fortunately, Leitch seems to pick up on that. Sticking with the franchise’s them of family, Hobbs & Shaw goes a long way in exploring the duo’s most precious relationships. We get to meet Hobbs’ daughter, who is completely unfamiliar with his estranged family on Samoa. At just the right time, the action moves to his childhood home on the island, where Hobbs faces old grievances, a whole house full of angry brothers (including Cliff Curtis and WWE superstar Roman Reigns in a small role), his Samoan heritage, and eventually an old school battle royale against Brixton’s futuristic tech. We also see the welcome return of Helen Mirren as Shaw’s mother, who wants nothing more than to see her children reunited.

You don’t need me to tell you that Hobbs & Shaw pushes the limits of believability. We’d be disappointed if it weren’t completely ludicrous! I don’t know if adding sci-fi elements is the right way to go, though. Probably not. These movies exist in a reality where literally anything can happen now. That includes a couple of incredible surprise cameos that I hope leads to much larger roles in future. Not that Johnson, Statham, and Kirby need the assists. Quick humor, audacious action, and an entire fuel tank of charm makes Hobbs & Shaw the unexpected kick in the ass this franchise needed.