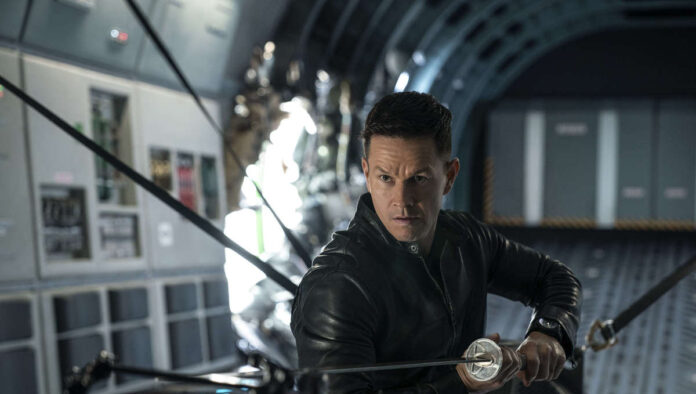 “There are among us a people gifted with a perfect memory of all their past lives. They call themselves ‘Infinites.’ Among the Infinites, two groups have vied for powers. On one side, the Believers, dedicated to using their knowledge for the protection and growth of all humanity. Against them stand the Nihilists, who see this power as a curse. New technologies have given the Nihilists an opportunity to end all life on Earth, and the race is on for its control.”

If there’s a problem with Antoine Fuqua’s Highlander-esque sci-fi flick Infinite, it’s encapsulated by the above exposition drop. Delivered by Mark Wahlberg’s downtrodden, possibly schizophrenic Evan McCauley, it lays out a needlessly complicated backstory so burdensome they thought it best to dump on us all at once. No matter how many cool car chases and running gunfights, the film never quite gets out from underneath a mythology that has been poorly thought out and gets worse along the way.

Manage to look beyond the ridiculous story and only at the cool CGI, fast paced action from the reliably muscular style of Antoine Fuqua, and Infinite can be quite enjoyable. Evan is a New York City guy whose mental illness and volatility have made it hard for him to land a job. Fortunately, he’s got other skills that he just sort of knows without having trained in them. He can fight like…well, like a Mark Wahlberg action hero, but he can also craft Japanese swords of impeccible quality.  Evan is also a fountain of information, like a walking encyclopedia.

Thanks to that handy dandy narration from earlier, we already know everything that’s happening. Evan is an Infinite, who has lived multiple lives and been reincarnated with all of that past knowledge; he’s being pursued by the chief nihilist Bathurst (Chiwetel Ejifor, getting pigeonholed as a pompous baddie) who think he holds The Egg, an item that could bring about the oblivion of all things. Good thing Evan encounters fellow Infinite, a woman named Nora (Sophie Cookson), so she can explain all of this stuff to him (and us) again! She includes a bit about one of Evan’s past lives as Treadway (Dylan O’Brien), who was basically like the Scott Summers to their band of immortal X-Men. Treadway and Bathurst, which sounds like a folk band from the ’60s, used to be best mates before becoming mortal enemies.

Fuqua and Wahlberg are pretty much the perfect pair, which makes it odd they haven’t worked together since 2007’s Shooter. Both make movies that are unabashedly for dudes, and be damned if there can be any vulnerability or sensitivity shown. You won’t be shocked that Fuqua keeps the pace blistering, with the many street chases a particular highlight. Wahlberg isn’t called on to do much other than to act tough. It’s weird that a character can learn he’s part of a race of beings who are reincarnated for all of eternity and to have it not be the catalyst for some personal evolution, but it doesn’t happen for Evan. That’s just not the nature of a Wahlberg character. Evan is a badass from the jump, and being an Infinite doesn’t really change that. The supporting cast, which includes former Oscar nominee Toby Jones in a role  that must’ve been sliced to ribbons, are mostly forgettable. The standout is Jason Mantzoukas as an oddball,

Not that anybody is going in looking for deep characterization, anyway. There’s a reason Paramount+ is the exclusive home to the film, rather than having it in theaters. Not only does the fledgling streamer need more to entice subscribers than Star Trek, but Infinite would’ve felt mediocre on the big screen where expectations, both visually and narratively, are a bit higher. But in the comfort of your home, Infinite is an exciting diversion but hardly the kind of film you’ll want to live through again and again.