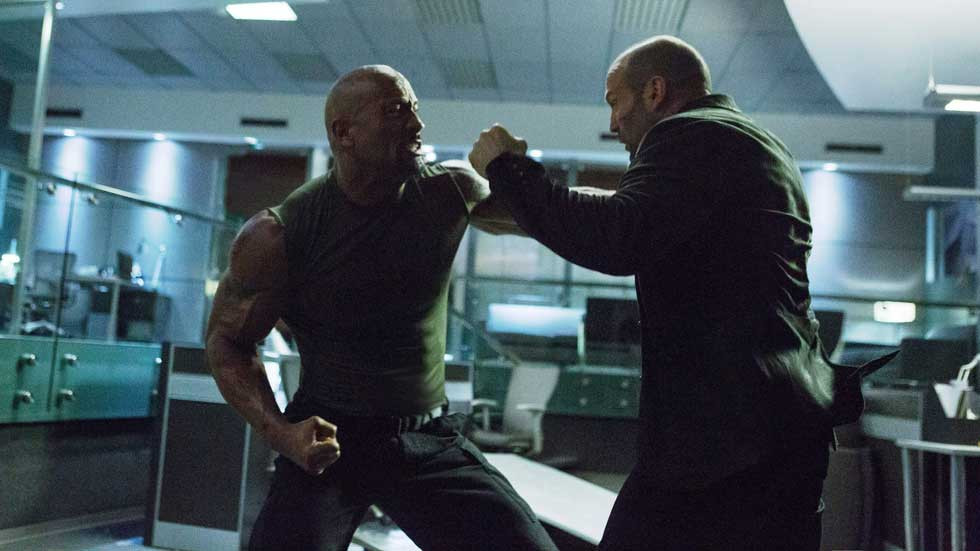 I fucking love this story.

My favorite scene in Quentin Tarantino’s brilliant Once Upon a Time in Hollywood involves a brutal career assessment of Leonardo DiCaprio’s Rick Dalton character, given by a big-shot producer played by Al Pacino. Basically, he tells Dalton that years of getting his ass kicked on screen by lesser actors has hurt his image. Or, to put it in wrestling terms because that’s the way I think; Dalton has been getting “jobbed out” for so long people perceive him as a loser.

In those days and for quite a while after, studios went to great lengths to maintain an action star’s image. That meant protecting them on screen by having them always look strong. Now, we see that mindset has been ratcheted up to a ridiculous degree, not by studios but by the stars themselves who hold so much power they can ensure they always look tough.

A new WSJ story talks about the extreme demands by Fast and the Furious stars Vin Diesel, Dwayne Johnson, and Jason Statham to maintain their tough-guy image. Basically, each bald-and-built actor has put systems in place to guarantee nobody comes out looking like a punk bitch in their movies. In the case of Diesel, it seems the long-running rumors about him having an actual numerical punch system in place is true, while Statham and Johnson turn to contractual agreements and outside fight coordinators. In the case of Statham, he tends to “swing by” the editing booth…y’know, just to make sure that jawline of his doesn’t take too much damage…

According to producers and crew members on the films, Mr. Statham, 51 years old, negotiated an agreement with the studio that limits how badly he can be beaten up on screen. Mr. Diesel, 52, has his younger sister, a producer on the films, police the number of punches he takes. And Mr. Johnson, 47, enlists producers, editors and fight coordinators to help make sure he always gives as good as he gets.


2017’s The Fate of the Furious was a notoriously contentious shoot, with Diesel and Johnson reportedly at odds with one another the entire time. It’s a big part of the reason their characters barely share any scenes. But one in which they do is, naturally, a big fight scene, and the actors’ egos came into play just as we would expect them to…

No moment in the movies appears too small for actors to nitpick. In a scene in 2017’s “The Fate of the Furious” that required Mr. Johnson to be lying on the ground at Mr. Diesel’s feet, he insisted his character at least be sitting up, according to a postproduction crew member.

Mr. Diesel’s sister, Samantha Vincent, weighs in on rehearsals and edits, people familiar with the situation said. “He’s falling down right here,” she once observed during a fight rehearsal, according to one person on set. “Is he going to get his licks back in?”

This kind of attitude isn’t unprecedented and certainly isn’t relegated to Fast & Furious stars. It’s all about staying on-brand, right? Tom Cruise goes to great lengths in all of his movies to make sure he comes out looking good, and he’s increasingly involved in every aspect of the filmmaking process. Why do you think he keeps working with his buddies? But to the best of my knowledge he doesn’t literally count the number of punches he takes in Mission: Impossible movies.

This story comes out with Hobbs & Shaw‘s debut this weekend, where Johnson and Statham are frequently battling a super-charged Idris Elba. This is going to make a lot of people look at those fight scenes with more scrutiny, that’s for sure.