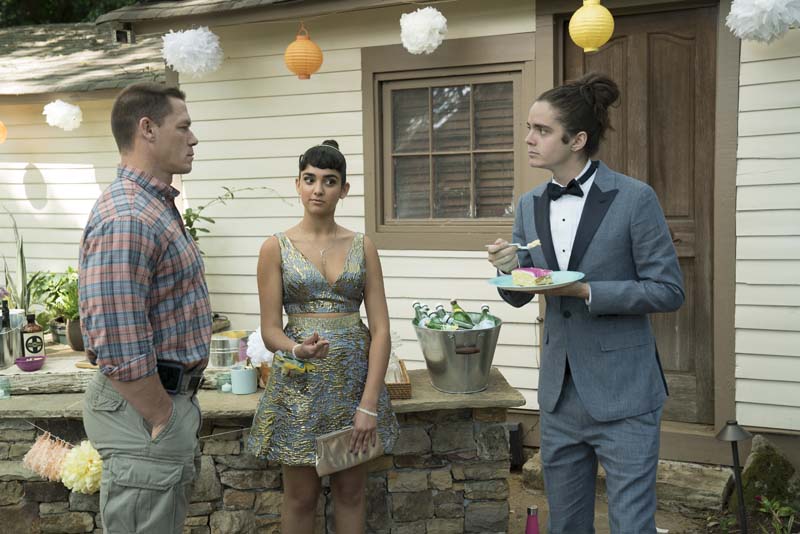 One of my favorite high school comedies to watch in the ’90s was actually pretty terrible, Trojan War, which found Will Freidle as a guy who just wants to get laid by Marley Shelton, but scrambles all around the city just trying to find a condom. And Jennifer Love Hewitt was his best friend that he had zero interest in. Yeah, it was one of those movies. Teen sex comedies always have some kind of hurdle placed in front of the horny, hormonal virgins, but in the new film Blockers it’s a trio of parents standing in the way of their kids having some horizontal fun.

John Cena, Leslie Mann, and Ike Barinholtz star in the film, which marks the directorial debut of Pitch Perfect writer Kay Cannon. If it looks like it just got rolled off the set of Neighbors or Neighbors 2, well, that may be because Seth Rogen and Evan Goldberg are on board as producers.  Formerly titled The Pact, the story finds three overprotective parents who discover their daughters’ sex pact for prom night, and set out to make sure they don’t get to do any of it. Hence the title “blockers”, in case you couldn’t figure it out. And the picture of the…ahem, cock-a-doodle-doo.

Three teenage girls looking for sex, with a screenplay by five dude writers. This should go well. Seriously, how did Cannon not take a run at this script?

I get some fascination at seeing Cena in such an awkward role, and the opening gag where he’s chewing his daughters’ panties is disturbing but kinda funny. However this looks absolutely atrocious overall, and I won’t be surprised if it catches some heat upon opening on April 6th.

John Cena’s ‘Peacemaker’ Has Some Fightin’ Words For Aquaman In New Clip, Trailer Coming This Week