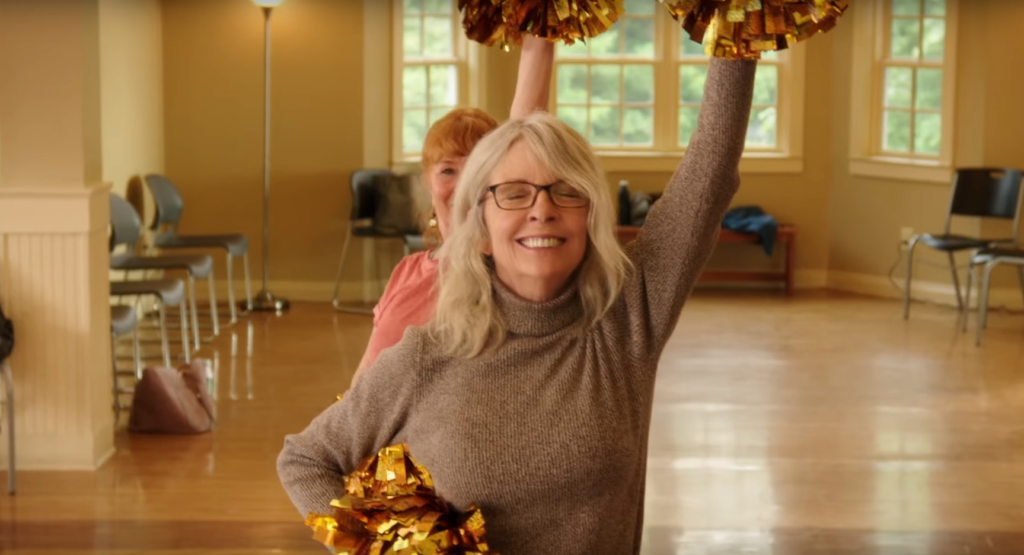 Like any good cheerleader worthy of her squad, the latest Diane Keaton retirement comedy Poms has spirit and enthusiasm to spare. It just doesn’t have a lot of laughs, with the comic routines as uninspired as when Bring It On‘s Rancho Carne Toros tried to get by on canned dance choreography. Damn that Sparky Polastri!

Poms is a well-meaning feel-good comedy with a simple message: age is nothing but a number, and it shouldn’t stop you from doing what you love. It’s also yet another film that puts Keaton in the role of a woman looking at a second chance to make life worth living. She plays Martha, who we meet as she’s selling off all of her things in an estate sale. It’s all part of her plan to get away and re-settle in a Georgia retirement community, Sun Springs, where everyone is forced, through some sort of dictatorial mandate by activities commissioner Vicki (Celia Weston) to join a group with the other residents. But Martha just wants to be alone, literally telling Vicki that she came there “to die.” 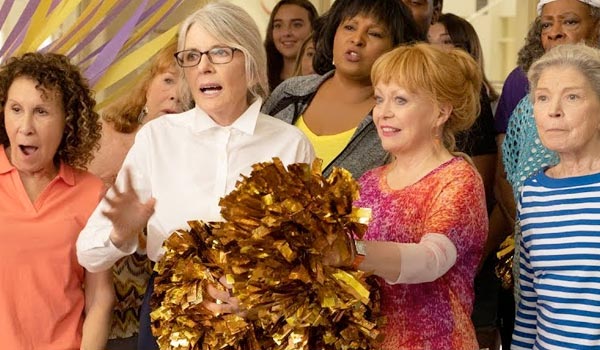 Inspired by some old photographs and her lustful neighbor Sheryl (a game Jacki Weaver), Martha decides to start her own cheerleading squad over Vicki’s angry objections. An assorted group of community misfits joins the team, none of which are developed beyond a basic archetype. Well, the exception might be Rhea Perlman’s Alice, a dutiful wife who may have murdered her possessive husband just so she can get out there and cheer. That she might’ve killed the man is one of the dubious gags screenwriter Shane Atkinson hopes you’ll identify with.  The script also skirts the line of being mean-spirited towards women of a certain age. There’s no shortage of jokes and flat-out insults at the ladies’ expense, oftentimes by the seniors themselves. And it’s hard to tell during practice sessions and dance routines, usually seen in montage, whether the debuting director Zara Hayes is laughing with these women or at them. Another odd scene, in which Martha makes each woman stare in the mirror and express one thing they love about themselves, is notable for the lame things each woman comes up with. Alice has great wrists for giving blood, apparently.

Of course, age isn’t the only obstacle Martha has to face. While there are detractors everywhere, including an arrogant high school squad who take every opportunity to embarrass them, it’s a lack of self-confidence that proves to be the biggest hurdle. For Martha, there’s the added threat of a health crisis that rears its ugly head when the story needs a push in a sentimental direction, but it’s never given any real emotional heft. It only makes you wish Keaton was given more to work with because she, along with Weaver, are a real treat to watch. Yes, we’ve seen Keaton play this starting-over-anew character many times but it’s because she always brings something authentic and dignified to it.

To be completely fair, I’m probably not the audience they were targeting, and those who can relate to Poms’ underdog story about starting over may leave the theater with a bit more pep in their step. Others will find it rather ordinary and hardly worth getting excited over.