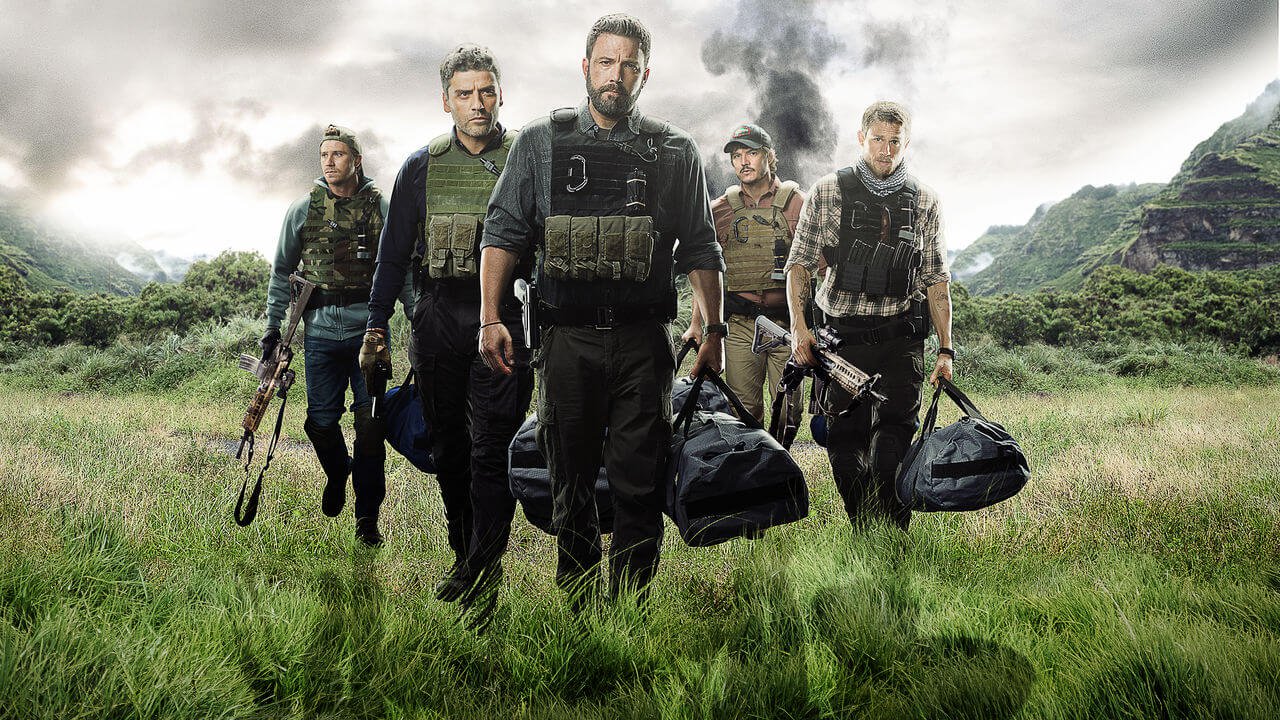 5 hyper-masculine movie stars playing ex-special forces
soldiers who head into the jungle to take out a drug lord. Did I fall asleep
and wake up in 1987? If so, can I stay here because this is awesome! Look, I
don’t actually long for a return of the Canon movie days where pistols could
fire 100 shots and the hero never gets hurt (unless it’s an arm shot…you know,
for drama) but there’s some manner of primal satisfaction watching the good
guys take it to the bad guys with nothing but their grenades and good ole’ ‘murican
spirit. What I’m trying to say is I love action movies so when I heard that Ben
Affleck, Oscar Isaac, Charlie Hunnam, Pedro Pascale, and Garret Hedlund (I
guess) were all headlining a new action flick from Netflix I was more then
stoked. Of course, it wasn’t the movie I expected at all….and that ended up
being a great thing.

While on his latest mission to take out Colombian drug Lord
Lorea Santiago “Pope” Garcia (Oscar Isaac) learns through his informant and
lover that Lorea is hiding out in his jungle estate with the entirety of his
cast. Pope sees a way to not just cleanse the world of Lorea’s mayhem but to
make a nice little retirement out of the deal. To kill Lorea and recover his
cash Pope must pull his former special ops team members out of retirement for
one last job. Tom “Redfly Miller (Ben Affleck) is now selling…or trying to sell
real estate, William “Ironhead” Miller (Charlie Hunnam) is a motivational
speaker for the military, his brother Ben Miller (who didn’t get a cool code
name for some reason and is played by Garrett Hedlund) is a regional MMA
fighter and Francisco “Catfish” Morales (Pedro Pascale) is a pilot who’s just
had his wings clipped. Basically….no one is happy, so it makes Popes job of
convincing these guys to go to another country and murder a man to steal his
money all that much easier.

Ok, so I already mentioned that this was not the movie I
thought it would be, it is definitely not a throwback to 80’s hyper-violence
and machismo. It was much more real and definitely more thoughtful then those
films, by MILES. All the way up to the assault on Lorea’s compound it feels
like it’s just about to go down that road but every time it gets there it makes
a sharp left. The subject is treated with the respect of someone honoring what
the real-life counterparts of these characters would be. There’s enough action
to keep the explosion junkies hooked but the real draw of this movie is the
tension. If you read any books about combat or the military one of the things
you’ll hear repeated over and over again is that the job mostly consists of
waiting and planning with insane spikes of adrenaline here and there. 1 week of
training and planning for 10 minutes of combat. The film doesn’t quite
replicate that…I mean that would be insanely boring, but it does wait just long
enough to let you relax before hitting the next action beat. I use the term relaxed
lightly because I was never exactly relaxed. There’s a genius in the way the
standard action tropes are used to wind you tight just before realizing that “no,
I guess they aren’t going to do it the way everyone else does”. One character
in particular had no less then 5 moments where they would have been killed in a
standard action movie. Without giving too much away this character could have
been knocked off without affecting much so you are waiting for him to bite it.
Time after time he’s the one elected to “Go check it out” where you just know
the shit’s going to hit the fan and he’s going to be the first one to catch
that breeze. Yet, they don’t take the low hanging fruit. All of this builds up
to the movie’s most climactic and gut-wrenching moment that I did not see
coming until just seconds before. If I had to pick something I didn’t like
about the movie it would have to be Ben Affleck’s character arc. Really this is
just being nitpicky and I’m pretty sure there’s a solid explanation that I’ll
get to at the end but the guys personality just flips a switch. We’re
introduced to him and he’s been beaten up by the world, he sucks at his job,
his wife doesn’t want anything to do with him and he can’t make ends meet, but
even with all of that he seems like a decent person and the last one of the
group that wants to have anything to do with the plan. Once they find the money
he becomes this reckless and ruthless sociopath. The junior psychologists out
there will tell me that this is his true self and once he’s back in his element
he fully embraces it…but if that’s the case then they should have alluded to it
in the talks between the other team members. Like I said, nitpicky, but I have
to show both sides.

Triple Frontier
is almost a thinking mans action movie. It’s not deep enough to really merit that
accolade but it’s close. If you’re looking strictly for a movie where ex-soldiers
rain down hellfire on a random Colombian drug lord then this isn’t for you, but
if you’re looking for something that checks the action boxes along with a few
more then I would definitely recommend booking away the 2 hours to check this
out. My only parting thought is this. Is Charlie Hunnam going to ever get the
film series he deserves? The guy is magnetic, a magnificent actor with the physicality
and demeanor to pull off being an action hero. That’s not really a common mix
of traits. Let’s all forget about King
Arthur: Legend of the Sword (which I totally enjoyed) and the less then
stellar domestic box office of Pacific
Rim and give this guy a good damn franchise already.
3.5 Out of 5