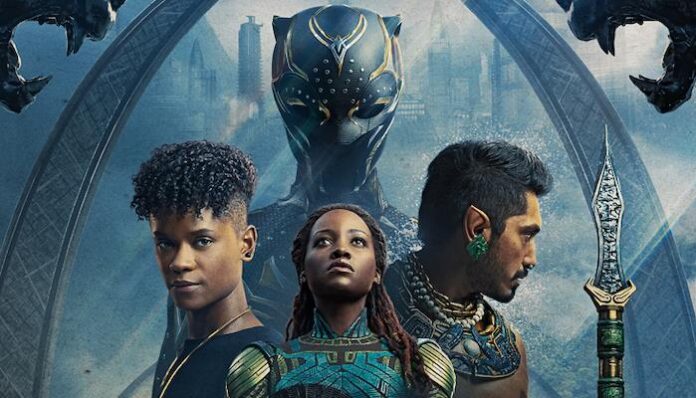 Few movies have as much heaped upon it as Black Panther: Wakanda Forever. Certainly, no Marvel Studios movie, no superhero movie period, has so many expectations. It’s not even really fair to say it’s “anticipated” because I think there’s a great deal of trepidation for a lot of fans going in, wary as to how the film will deal with the tragic death of Chadwick Boseman and the disappearance of his character, T’Challa. But at the same time, this is a film that must be a healing experience for all who grieve, while also providing the comic book action and surprises that are still a must. To accomplish all of that successfully would almost be a superhuman feat in itself.

Black Panther: Wakanda Forever is every bit the cathartic experience we needed it to be, telling an exciting, deeply emotional story that allows us to come to terms with our feelings over Boseman. At the same time, we’re witnessing the people of Wakanda deal with their grief over T’Challa. Faced with a herulean challenge, director and co-writer Ryan Coogler had to throw out his original plans for the sequel and tell a story that he knew couldn’t just be for him, but for everyone that is grieving. He doesn’t make the audience wait for it, either. Immediately, we are thrust into the chaos of a Wakanda without T’Challa. All of the technology in the world, which Wakanda has in spades, isn’t enough when they need it most. We witness a nation in mourning, and yes, for a time it feels almost too heavy to bear watching these characters at their lowest point.

But it’s just the beginning. A recurring thread throughout is that Wakanda and all of its vaunted stores of Vibranium, and infinite amounts of advanced tech, can’t fully protect them. And yet some will turn to that technology to cope. T’Challa’s absence opens the film up to other characters with expanded roles. Letitia Wright takes more of a centerpiece spot as T’Challa’s brilliant sister, Shuri, who turns to her machines as a way of coping. Meanwhile, Angela Bassett is essentially the lead as Queen Ramonda, a woman who perhaps has lost more than anyone else in the entire MCU. Now, with her husband and son both gone, Ramonda strikes a fearsome tone as the de facto leader of Wakanda, leaning on her faith in the culture to get by, as opposed to her daughter who has cut herself off from humanity.

Clocking in at 2 hours and 40 minutes, Black Panther: Wakanda Forever has a ton of story to tell and it needs every single minute. The film serves as a backdoor prelude to the upcoming Ironheart Disney+ series, introducing Dominique Thorne as Riri Williams. The genius-level teen proves an interesting counter to Shuri, and an exploration of the diversity in the Black experience. Both Riri and Shuri and two of the smartest people in the world, but their backgrounds couldn’t be more different. The streetwise Riri runs afoul of Wakanda in a way that also involves the shady governments of the world, including ours, that are looking to get their hands on Vibranium. There’s a hilarious encounter in a college dorm where Riri first faces Shuri and a menacing Okoye (Danai Gurira), who would just as soon smarten up this mouthy kid with the blunt edge of her spear.

Throughout, the presence of T’Challa is felt in unexpected ways. Decisions he made in the past have attracted the attention of Namor, played by Tenoch Huerta in the character’s MCU debut. As the king of the underwater city of Talokan, Namor is revered as a god to his people, and he seeks to protect them from the outside world. To do that, he wants Wakanda’s help, but in a way that is very similar to Erik Killmonger, his methods are extreme and uncompromising. Namor’s introduction to the MCU is huge, as officially the first mutant we’ve seen in the franchise. Visually, Namor’s mutant physiology is played up to be a bit bizarre to the eye. His spiky ears, the winged feet fluttering as he zips through the water and the sky make him look like a demon from myth and legend.

It’s a fitting presentation for Namor, who comes across as a total badass who is more than a match for Wakanda’s best warriors. The same goes for his blue-skinned allies, including the bruising Attuma (Alex Livinalli) and cousin Namora (Mabel Cadena). Attuma and Okoye develop an intense rivalry that could last through future films it’s so good; the best of Wakanda vs. the best of Talokan. The city draws inspiration from Aztec architecture and looks so stunning it could give James Cameron’s Avatar sequel a run for its money. Much like Wakanda, the people of Talokan rely on one another to make themselves strong, but they put their ultimate faith in a single champion, Namor. The only hope Wakanda has to win is by having a champion of their own, but who will don the suit as Black Panther with T’Challa gone?

That question has largely been answered already in various teasers, and I really wish they had kept the secret better. But the truth is, who the new Black Panther is doesn’t matter as much as why they decide to become the costumed hero. Here is where the legacy of T’Challa comes into play once more, but so does the influence of other Wakandan kings. How this new champion sets aside their personal grief, anger, and desire for vengeance tells a powerful story of overcoming tragedy and forging a new path led by hope.

With so much story to tell, it’s inevitable that some things will get the short end of the stick. Martin Freeman’s troubles as Wakanda’s closest ally in the American government gets a surprising amount of screen time, but doesn’t feel as fleshed out as it could’ve been considering the impact it’s likely to have on future Marvel projects. Also, Winston Duke makes the most of his time as Jabari tribe leader M’Baku with some of the film’s best one-liners, but he’s such a welcome presence that you want to see even more. Give M’Baku his own Disney+ series, please! Lupita Nyong returns as the “War Dog” Nakia, and while her role is pivotal in more ways than one, she gets considerably less time than before.

There’s less action and a lot more talk this time around, for reasons that should be obvious. This is a film about people working through their pain, and that can’t all be accomplished by punching things. But it certainly does help, and the conclusion is a massive battle between the two most powerful nations in the world. It’s an incredible, intense war that gives every character their moment to shine. Ironheart looks like the coolest new kid on the block, and gets you hyped up for her upcoming series. And of course, the fight between Black Panther and Namor is swift, brutal, and packed with the emotion of two leaders with the weight of the world on their shoulders. The stakes have rarely been this big for a Marvel slugfest, and you feel it with every blow.

Black Panther: Wakanda Forever had the highest of expectations and surpasses every one of them, and makes a strong case for itself as a Best Picture contender. It’ll make you laugh, it’ll have you on the edge of your seat, and it’ll make you cry with fond memories of the late Chadwick Boseman. Marvel pays tribute to Boseman in many ways during the film, from beginning all the way to the closing credits. And with a finale that assures the legacy of T’Challa will be part of the MCU for a long time, Black Panther: Wakanda Forever is the fitting tribute fans were hoping for