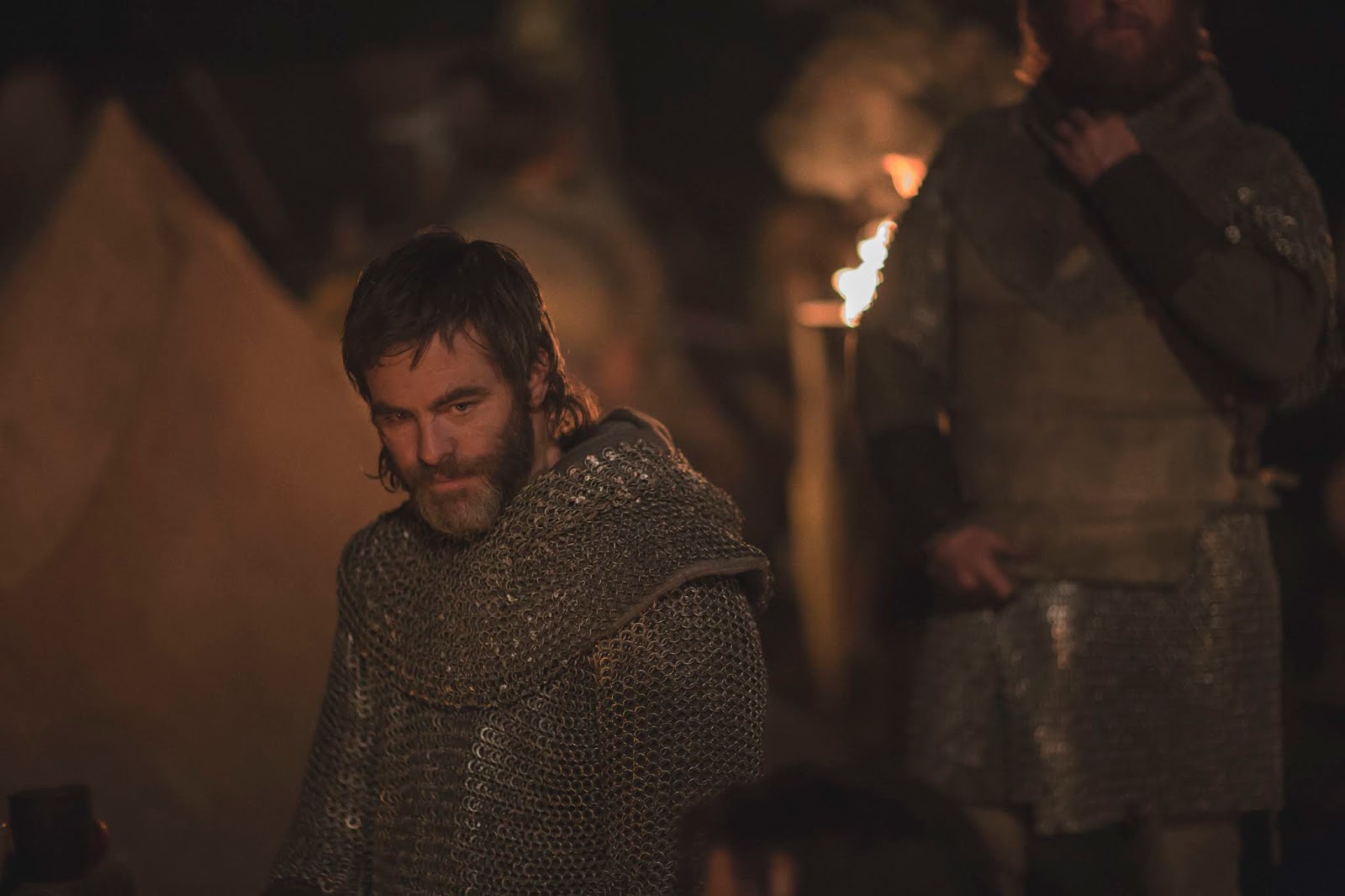 In the footsteps of Gladiator, King Arthur, Braveheart, and Game of Thrones (with whom it shares many cast members) steps Outlaw King, the latest partnership between director David Mackenzie and Chris Pine, who previously worked together on 2016’s best film, Hell or High Water. Some of the same themes of that film are recreated here—relationships between fathers and sons, literal and figurative debts, the connections between violence and revenge—but this 14th century tale of Scottish lords uniting and rebelling against the English monarchy is still very much in the mold of “dudes in chainmail with swords on horses.” It’s a formula done well, but still a formula.

Outlaw King takes place in Scotland and England after the failed uprising of William Wallace (which you may remember from Mel Gibson’s Braveheart), who has fled and is in hiding; in his absence, English King Edward I (Stephen Dillane, or, Stannis Baratheon from GOT!) forces the other Scottish lords to swear fealty to England. The decision to bend the knee by Robert de Brus (James Cosmo, or Jeor Mormont, from GOT!) rankles his son Robert the Bruce (Pine), but the patriarch makes a decision for the future of his family: Give up dreams of a united Scotland with its own king now, and survive into the future, for generations and generations afterward. 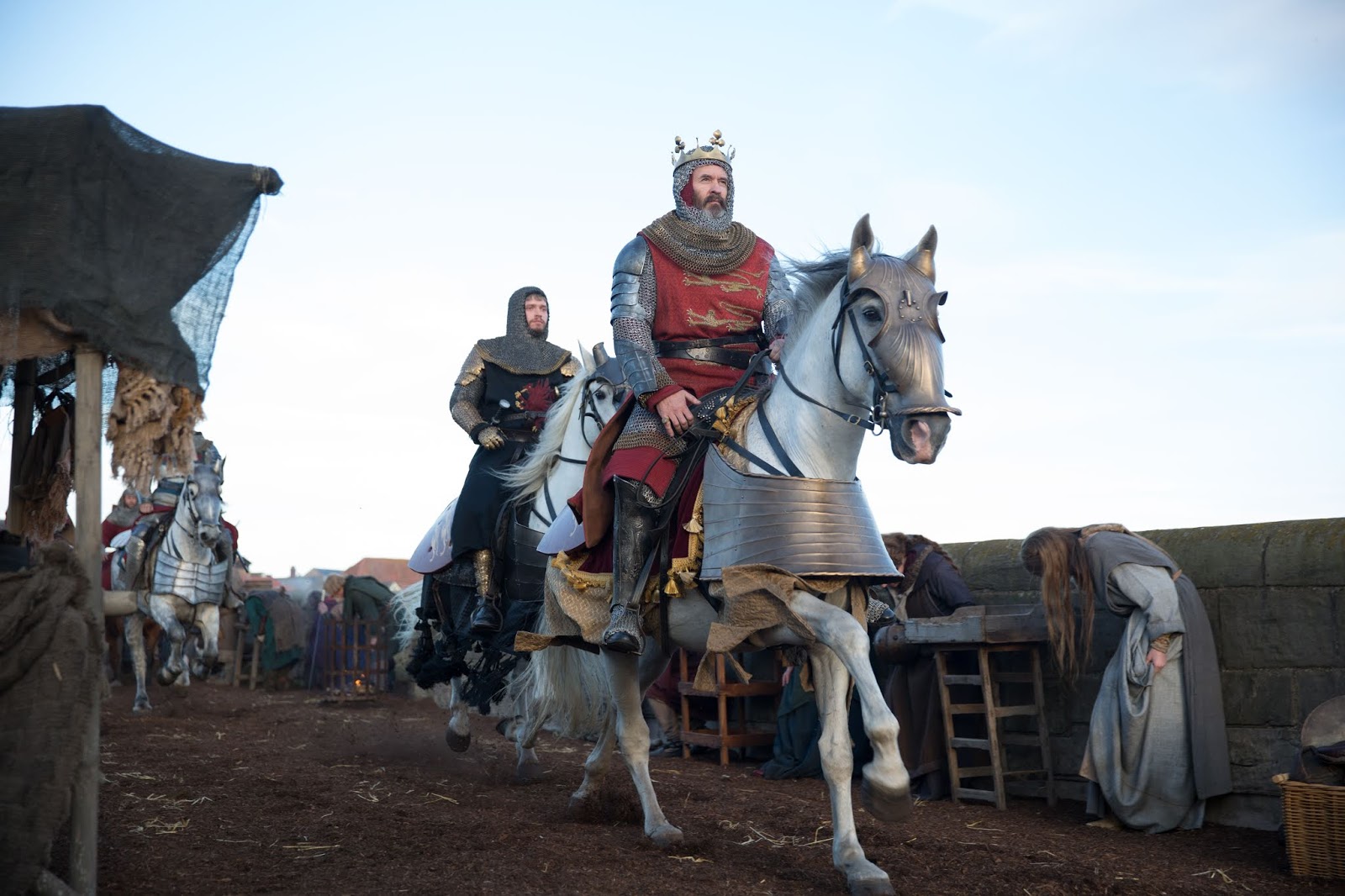 “It’s ours to bear,” Robert the Bruce says to his brothers of their father’s decision, but things change quickly when tragedy strikes twice: First when Robert de Brus dies, and then when the English monarchy announces the capture and murder of William Wallace, with various body parts of his put on display throughout Scotland, to send a message. Enraged, Robert the Bruce decides to seize power in an attempt to name himself king of Scotland, a decision that inspires Edward I to send his son and heir Edward, Prince of Wales (Billy Howle), to kill Robert and all the Scots who follow him.

Outlaw King will feel familiar to anyone who has seen the last few seasons of Game of Thrones, when Sansa and Jon traveled around the North, trying to round up men to join their uprising, and there are echoes here of the climactic fight between the Starks and the Boltons, too. (If you can’t handle watching horses get killed, you may need to sit this one out.) But of course that makes sense because so much of George R. R. Martin’s novels are inspired by true stories such as this, of the bloody and violent struggles for power that shaped the British empire and its subsequent colonization of so much of the rest of the world.

And so while Outlaw King feels familiar, it is ultimately upholding a specific genre construct, and doing it successfully. There is an almost unbelievably well-done 20-minute tracking shot that opens the film, introducing all the key players and their varying motivations in a dizzying example of technical mastery. That solid pacing continues throughout; the movie moves briskly, and although the timeline—like so many movies these days—feels a little fuzzy, like what we watched could be taking up days or weeks or months, it’s still edited in a way that keeps the action moving without feeling too rushed.

Pine’s Scottish accent is pretty believable, and he works well as a man worn out by years of war who has to learn that the chivalrous choice isn’t always the smartest one. It’s a similar role to his subdued-then-violent brother in Hell or High Water, and Aaron Taylor-Johnson fills the Ben Foster role by stealing scenes as the crazed James Douglas, a man desperate to avenge his family’s death and reclaim his ancestral lands from the Englishmen who stole them.

But this is very much a Movie About Men, and so Florence Pugh, as Robert’s wife Elizabeth, is fairly underserved. She falls in love with Robert because he’s smart and kind and abstains from having sex with her until she’s ready (in a cliched, disappointing “lovemaking” scene), but when she swears her loyalty to him, it feels perfunctory at best. The character isn’t developed enough to make her support of her husband feel worthwhile to the narrative.

Oh, and let me just say this: This was a movie that KEEPS getting hyped as having full frontal Chris Pine nudity, and that is a LIE. The split-second moment is NOT WORTH IT unless you were interested in seeing a sequel to Braveheart anyway. Do not watch Outlaw King for Pine Jr.; you will feel manipulated and lied to.

But, for what it is, Outlaw King is effective, if not exactly thrilling; there are no big speeches like Gibson’s “They’ll never take our freedom” in Braveheart or Russell Crowe’s “My name is Maximus Decimus Meridius” declaration in Gladiator. The battle scenes are cleanly shot and often grotesque, as befits the time period; the motivations for Robert the Bruce’s actions track and will garner the audience’s sympathies; and there’s a moment when Taylor-Johnson, covered in blood and grime, screams his own name into the sky after murdering a bunch of men in vengeance. That’s the kind of stuff you want from a historical battle epic like this, and Outlaw King delivers.

Outlaw King is now streaming on Netflix and available in limited theaters.

Aaron Taylor-Johnson Has Reportedly Met With 007 Producers: Is He The Next James Bond?