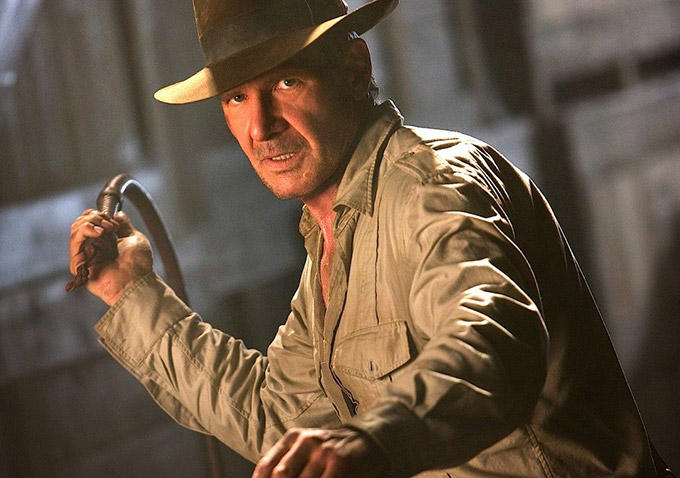 When Chris Pratt was rumored to be taking over the role of Indiana Jones from Harrison Ford, it made sense. I would classify his performance in Jurassic World as very Ford-esque, and he seems to be everyone’s favorite adventure hero right now, just as Ford was for an earlier generation. Pratt has both denied this rumor and kinda acknowledged it, so who knows whether this was or is in future plans. One thing we know for sure is that Ford isn’t down with Pratt taking over, not in the least.

Ford was recently honored by SAG-AFTRA Foundation with the Artists Inspiration Award, and while walking the red carpet he was approached by Variety. Did they want to know about the awards? Not so much; they wanted to ask him about Indiana Jones 5, which was recently bumped to 2021 so a new take on the script could be written. On that score, Ford didn’t really have much to say…

“…We’ve got a script in production that we are all very excited about, and [I’m] looking forward to it.”

Yeah, okay. Nothingburger right there. But when the reporter asked Ford about Pratt possibly replacing him as Indiana Jones, the veteran actor replied with…

Damn! Bare knuckle brawl for Indiana Jones! My money’s on Harrison Ford, f’real. He’s got a shank hidden in his goatee.

Honestly, I can’t tell if Ford is being serious here or not.  He takes the characters he plays very seriously, and may not want to entertain the idea of anyone else playing Indy. He may also know something we don’t, and this is his way of ending the conversation emphatically.   We all know at some point the torch will have to be passed, right? And surely Ford knows that, too.

Harrison Ford on whether Chris Pratt is joining #IndianaJones: “I think it’s him or me” https://t.co/95n7PCxeaM pic.twitter.com/cLgrPWITs7