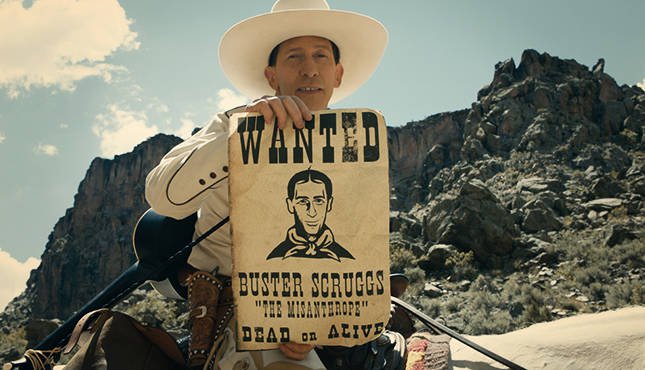 Uh, what in the world were The Coen Brothers doing with The Ballad of Buster Scruggs? An oddity from the duo with a penchant for the offbeat and macabre, this Western anthology bears few resemblances to their previous stabs at the genre,  True Grit and No Country for Old Men. While Western aspects have frequently been tucked away in some of their other films, Buster Scruggs is like every half-baked idea they’ve had rolling around like tumbleweeds for years. Said to have been conceived as a miniseries but converted into a feature for Netflix’s awards season push, it amounts to a very frustrating, wildly uneven 130 minute experience.

Your mileage with Buster Scruggs will vary depending on which version of the Coens you prefer. For me, the further they drift into the absurd and farcical the better, which is why the opening segment,  featuring Tim Blake Nelson as the titular Scruggs is the film’s high point. With guitar in hand and a smile two counties wide, the Gene Autry-esque cowpoke Buster Scruggs is the model of charm and civility, which is his great cover. Nobody would take the lanky and unimposing Scruggs seriously, although when they learn his name it has always somehow preceded him. He’s just as efficient with a gun as he is with a tune, and Scruggs comically dispatches those who underestimate him.  The violence here is cartoonish, an illegally-armed ornery cuss played by Clancy Brown soon finds out when he faces the unarmed Scruggs.

If there are over-arching themes they are karma, chance, and irony, one of which leads Scruggs to a fateful encounter with a hotshot rival. Those ideas form the barest of connective tissue to the transient second chapter, Near Algondones, which stars James Franco as a comically-doomed bank robber who gets more than he bargained for from the manager, played by Stephen Root looking like a distant cousin of Office Space‘s Milton. As Franco’s would-be bank robber goes from one terminal misfortune to the next, he winds up in a hilarious conundrum involving a Comanche attack, the horse he’s sitting on, and the noose he’s hanging from.

Tom Waits shines in the brilliant and soulful All Gold Canyon, in which the Coens reflect on nature and man’s tendency to bring violence everywhere it goes. Waits plays a gruff, filthy old prospector who has discovered a virtual paradise, a peace of land untouched by man. So of course he hitches up his mule and begins mining the stream for gold, tearing up this once idyllic corner of the country on a greedy quest for riches. The Coens wisely let this story play out in deliberate fashion, allowing us to take in the enormity of Waits’ performance and the terrible destruction being committed by this man who, undoubtedly, is not engaged in such broad considerations. It almost moves too slow, but this is all a cover for a perfect twist that buttons up all of the Coens’ concerns in a neat little bow.

Zoe Kazan does her best to carry the meandering tragic romance, The Girl Who Got Rattled, about a lonely woman on a wagon train to Oregon. This one, perhaps more than others, feels like it had been originally designed to be a complete episode of a show, or maybe a short film. The titular lady is rattled for a reason as he suffers one tragedy after another, but ultimately does find reluctance romance with the handsome cowboy, Mr. Knapp (Bill Heck), however it’s a latter attack by Native Americans (a recurring event, it seems) that reveals a different hero and yet another ironic twist of fate.

Other installments left me scratching my head, when I wasn’t looking at my watch. In Meal Ticket, Liam Neeson plays a grizzly old traveling showman whose act is an armless, legless man (Harry Melling) who performs live reads of poetry, the Bible, Shakespeare, whatever will draw an audience. However, those audiences are dwindling and the showman is forced to consider whether it’s worth it to keep dragging the poor guy along, or look elsewhere for more lucrative talent. This ponderous episode features little dialogue other than Melling’s sonnets, while Neeson seems to be going through the motions.

Lastly, The Mortal Remains ends on a sour note, one that finds the Coens dabbling in a genre they haven’t done before and probably shouldn’t again. The gothic, Twilight Zone-esque story features Brendan Gleeson, Tyne Daly, Saul Rubinek, and more as passengers on an eerie carriage ride exchanging unpleasantries the entire way. This particular segment is such a vast departure from the rest of the film, which is already lacking in connective tissue, and comes off as an attempt by the Coens to be unpredictable. The problem is that nothing about this story is, and the paranormal direction it eventually veers towards is obvious from the start. Other than Gleeson breaking into a mournful song part way through there’s very little to stop you from cutting this one off early.

Anthologies are always difficult to pull off. If you take each segment individually you can find a little bit of the Coens at their best, but as a whole Buster Scruggs is too often like a gunfighter firing nothing but blanks.