Royal palace intrigue is often bawdy and always scandalous, but in the hands of director Yorgos Lanthimos it reaches new levels of delicious evil. The Favourite is a lot like the director’s bizarre romance, The Lobster, twisted and disturbing in its depiction of people who will do anything for love. In this case it’s the love of power that’s paramount, and the manner which that love of power corrupts provides a lot of sick enjoyment, but like too many o fLanthimos’ films the high doesn’t last quite long enough.

The Favourite is perhaps the most easily accessible of all of the director’s films so far. Olivia Colman plays the terrifically bawdy and childish Queen Anne, the 18th-century monarch who babbles incoherently in-between treatments for her gaut-ridden legs. She barely runs her kingdom, leaving that in the hands of her best friend and secret lover, Sarah (Rachel Weisz), a bludgeon of insults and aggressions but a straight arrow in a place where lies are the surest currency. As the wife of the country’s finest soldier (Mark Gatiss), she uses her closeness to the Queen to push his case for a continued war with France, while the opposition party, led by powdered blowhard Harley (Nicholas Hoult), wants to sue for peace. How goes the action between the sheets, so goes the country. 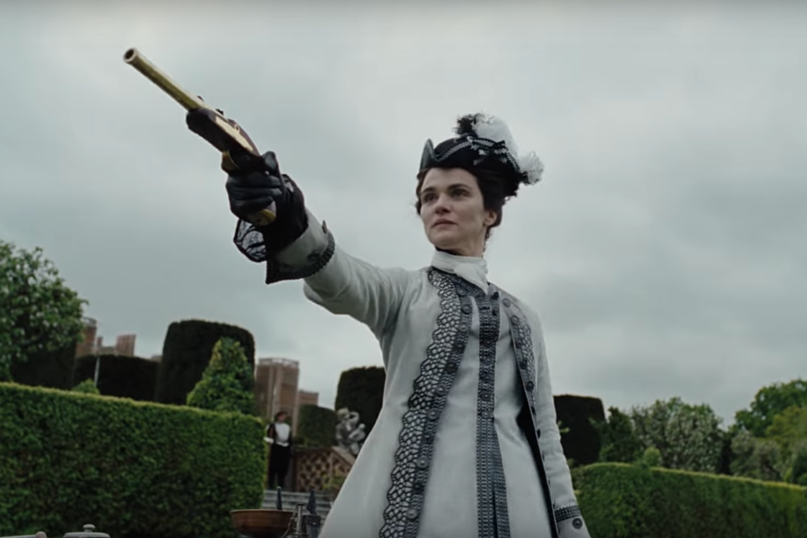 Into this illicit affair enters Sarah’s cousin, Abigail (Emma Stone), who has fallen far from grace and comes crawling, quite literally, covered in stinking “mud”.  Lost to her father in a bet and used as a sexual object ever since, Abigail arrives with hope of a job, attaining a menial one that Sarah clearly loves lording over her. But of course, we are taking about a game of thrones here, and Abigail has higher aspirations.  It isn’t long before she’s weasling her way into the Queen’s good graces,”accidentally” letting slip that it was she who soothed her ailing legs, or by feigning interest in her 17 pet rabbits. The site of the furry creatures bounding around all over the place is just one of the indelibly wacky images The Favourite will leave.  Another, which had the crowd roaring with laughter at our screening, featured a palace ball where  Abigail’s potential suitor Masham (the ubiquitous Joe Alwyn) explodes into breakdance in a wacked-out dance line like it was something out of Soul Train, all while a stoney-faced Sarah grooves at his side.

Penned by Deborah Davis and Tony McNamara, The Favourite relishes in upsetting our expectations of the genre. The first use of the word “cunt” rips through the formal, mannered dialogue like a gunshot, and we love it for its vulgarity. The film is a lot like its subjects in a lot of ways, a snake hiding in plain sight.  Beneath the prideful, superior air is a film that doesn’t mind getting in the gutter, and the crazier it gets the better The Favourite is. Lanthimos also seems more interested visually the further off the rails his story veers, with a wide array of fisheye lenses and ratio tweaks adding a surreal quality. We’re gorging on this delicious mischief as much as the Queen enjoys shoveling caekes into her eager piehole, only to vomit it up and kee on eating. 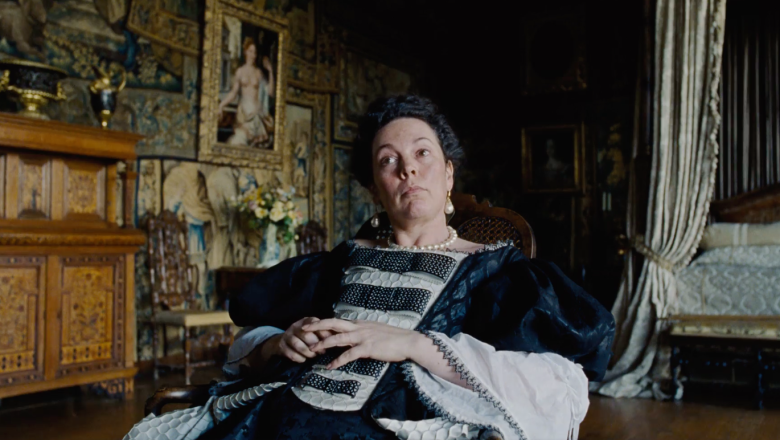 One can’t help but love how feminine this story is, that we are watching three women controlling the reins of power, manipulating the feeble men around them like pieces on a chess board. They are in every way as capable of ruthless aggression, as well as some posturing, as any man. The  power struggle between Sarah and Abigail often playing out at a shooting range, where the latter proves she is a very quick study at aiming for and hitting what she wants.  Each of the leading ladies is brilliant, shifting with ease from charming and ladylike to murderous rage in the span of a few words.

But this exploration of the connection to women and power has its comic limits, and the film takes a grim tone once each lady becomes the instrument of their own defeat, in a sense. As much of a fun romp as it is up to that point, it’s just as baffling later on that the absurdist aspects are sacrificed at the altar of seriousness. Again, this is a common thread for Lanthimos and its as if he creates a vision so strange, so aslant from reality, that he’s never quite sure how to keep it going. He has even less of an idea how to wrap it up, and The Favourite abruptly pulls the rug out to such a degree that it’s jarring and unsatisfying.