Simon (Kyle Gallner) is not having the best day in Dinner in America. He is short on cash, in a fight with his band, and on the run from the cops. You see Simon has an arson problem. In the sense that he is that problem. He has a proclivity to set shit on fire. With the cops closing in, Simon is running out of options. Then he meets Patty (Emily Skeggs) and everything changes. Patty is a socially awkward girl with her heart in the right place. She may be a little naïve, but quickly embraces Simon and allows him to stay at her place. Of course, Simon has to convince Patty’s family – Connie (Mary Lynn Raksjub), Norm (Pat Healy), and Kevin (Griffin Gluck) – that he has a heart of gold. 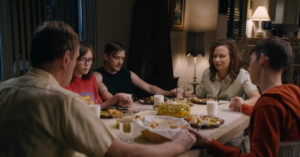 Some might see Patty and Simon as complete opposites. Patty’s sweet demeanor clashing with Simon being all punk rock. Beneath her exterior, Patty is a punk rocker while Simon is loyal and caring to those close to him. The only thing Patty wants in return for helping Simon, is for him to take her to a concert at the end of the week. What Patty doesn’t know is that John Q, the masked lead singer of her favorite band and her crush, happens to be Simon himself. As the two go on adventure after adventure, they realize how similar they actually are – and get ready to rock. 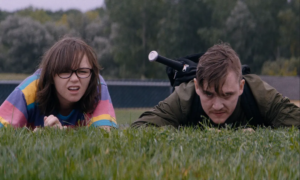 Dinner in America is written and directed by Adam Rehmeier. Rehmeier has an eclectic background on a movie set including operating the camera, cinematography, and editing. It has been more than half a decade since his last project that he wrote or directed. Rehemeier doesn’t seem to have missed a beat. Dinner in America has an underlying energy that is infectious. Simon embodies punk rock and Rehmeier ensures that Dinner in America does so as well. The music, script, and cinematography mesh perfectly with the musical genre and the film doesn’t stray very far. Rehemeier finds his footing with the script as the film progresses. The humor and genuine human connections come to the forefront and pave the way for a truly satisfying ride.

The driving force behind the film is Gallner and Skeggs’s chemistry. They play their parts to perfection individually and even more so together. Simon is a complicated character, a tough exterior but has gentle qualities beneath the surface. Even when they come to the forefront, they are still accompanied by some type of vulgarity. Gallner is able to portray this masterfully as well as the growth in the character. A character that some may initially think is a pos, Gallner does a 180 – having the audience invested in Simon. Patty’s transformation and growth is depicted perfectly by Skeggs. A shy and seemingly sheltered girl is transformed after meeting Simon – allowing her to be her true self. Dinner in America could’ve benefitted with a little more music, especially in the first half. That being said, it is an enjoyable coming of age story and Rehmeier hits mostly all the right notes.

Dinner in America opens in select theaters Friday, May 27, 2022 and will be available digitally and on demand Tuesday, June 7, 2022.