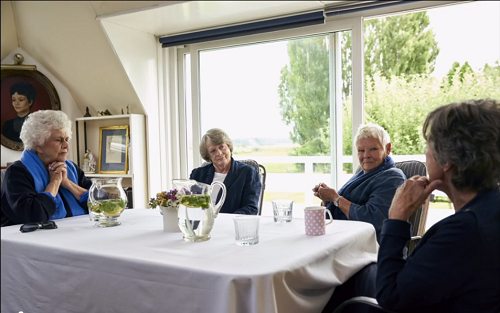 Tea With the Dames is probably something you need right
now. The documentary from filmmaker Roger Michell brings together dames, acting
legends, and friends Judi Dench, Maggie Smith, Eileen Atkins, and Joan
Plowright to talk about their lives, and the film is a calming, amusing respite.
This feels like a banner year for documentaries, especially
profile pieces like the Mr. Rogers-focused “Won’t You Be My Neighbor?” and “RBG,”
looking at the life of Supreme Court Justice Ruth Bader Ginsburg, and “Tea With
the Dames” shares some similarities with those works. Shot over two days at
Plowright’s cottage in the English countryside, there is constant breaking of
the fourth wall as you hear Michell and his crew ask the questions, watch as
the women ponder them and talk among themselves, and observe as they sometimes
get irritated with the filmmakers—especially Smith, who lobs off a few zingers
at a photographer she thinks is getting too intrusive to her and Dench’s
personal space.
And the most enlightening thing about Tea With the Dames is moments like those, when you get a sense of the women’s deep friendships and
how their years in the industry have brought them together and also kept them
in competition. American viewers will certainly recognize Dench and Smith from
their film work—the former in the Bond series, the latter in the Harry Potter
franchise—and perhaps Atkins and Plowright won’t be as instantly recognizable,
but they’re all legends, the latter two especially for their stage work
(Plowright was married to Laurence Olivier).
What comes up over and over again in their conversations
as they are prompted by Michell to “talk about fear” or about acting with their
spouses or how their parents reacted to their decision to pursue acting is just
how much they like the work. Decades
of effort, of throwing themselves into Shakespeare adaptations and film
projects, of works that were praised or panned, of competing against each other
for parts (Plowright tells a great story about how her American agent had
complained about Dench’s omnipresence, which offends “Jude” but makes all the other
women laugh), and of watching each other’s careers and being supportive from
close and from afar.
The camaraderie is evident in Tea With the Dames, and
coupled with the women’s willingness to talk honestly about their experiences and the seamless use of archival footage, makes the documentary a must-watch for any fan of these women. How “Tea With the
Dames” gives its subjects space to be thoroughly themselves, even when they’re getting
cross with the filmmakers, is a gift that makes for an amusing, engaging watch.