Robocop is one of those unique movies that became a classic not just because of its content but because of the time in which it was released. I’m not going to rehash the Robocop 101 history, but for you math majors, Reaganomics + Robotic Jesus Allegory x Hyper-violence= Perfection. The mix of these three ingredients is the exact reason why none of the sequels nor the remake from a few years ago hit big. The remake, by the way, was awesome for what it was but ended up being just a great sci-fi action movie, the lack of that extra social commentary makes it fail to stand up to the original in comparison even if you didn’t realize it.

Enter Neil Blomkamp, who hit big with District 9,  a sci-fi allegory for real world issues which was full of action and violence, see where I’m going here? Blomkamp has announced that he’s working on a direct sequel to the original 1987 Robocop, obviously the internet’s first reaction was a collective groan, but then the details started to surface and with that a shred of hope. The thing is, we are currently living in a time that is more primed for the type of satire used by Veerhoven in the original film then any other time in history. I don’t care where your political allegiances lie, you have to admit that this is true. The only catch point is the filmmaker GETTING that. If anyone will, it’s Blomkamp. Not sure because he’s allready shown a talent for it with District 9 but because he’s a tried and true fan of the original, a resume point that is proving more and more important in the world of failed remakes and sequels. Look no further then his twitter exchange (pictured below) where he comes right out and names Peter Weller as his choice for Robocop. Yes, Weller’s getting on in years but we only need to see his mouth and the guy has had an uptick in work over the last 5-10 years with big parts in both Star Trek: Into Darkness and Sons of Anarchy so we know he’s still working. Call me #TeamRobocop at least in the early stages this is setting up to look like a sequel done right. 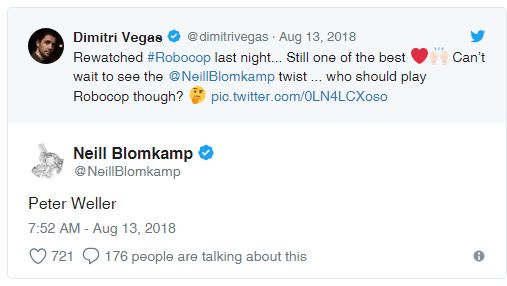