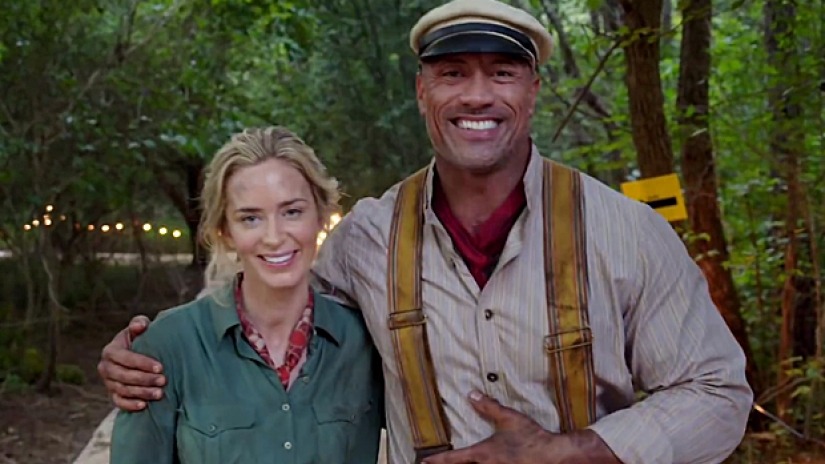 Disney’s Jungle Cruise wasn’t a film I was terribly interested in…until now. While the cast of Dwayne Johnson, Emily Blunt, Edgar Ramirez, Paul Giamatti, Jack Whitehall, and Jesse Plemonms is pretty great, it looks like the massive, jaw-dropping set is going to be the real star.

In a new set video, Johnson teases the extravagant set that has been totally built from scratch. No green screen in this baby. The camera zooms out to reveal an incredible, hand-crafted set the likes of which we simply don’t see anymore. Disney spared no expense building this right in the heart of the Hawaiian jungle, and it’s fitting for a film based on one of their first and most popular theme park attractions.

Johnson would probably be posting social media vids of the production, anyway, but Disney is smart to have him out there. A month ago he and Blunt did a cutesy vid that showed some real on-screen chemistry, and now this time Johnson is just being the charismatic, and enthusiastic, cheerleader that he always is.

Directed by Jaume Collet-Serra and penned by Michael Green, the film is set in the 1900s and centers on a boat captain (Johnson) who takes a sister and her brother (Blunt and Whitehall) on a mission into a jungle to find a tree believed to possess healing powers. All the while, the trio must fight against dangerous wild animals and a competing German expedition.

“*watch ’til the end and see one of the most awe inspiring & massive sets ever built from scratch.
Walt Disney, this one’s for you buddy! ???” (via @TheRock) pic.twitter.com/1eEf7fYRiW

Emily Blunt and Dwayne @TheRock Johnson welcome you to the adventure of a lifetime! Disney’s #JungleCruise is now in production. In theaters October 2019. pic.twitter.com/bJM4DQoj62