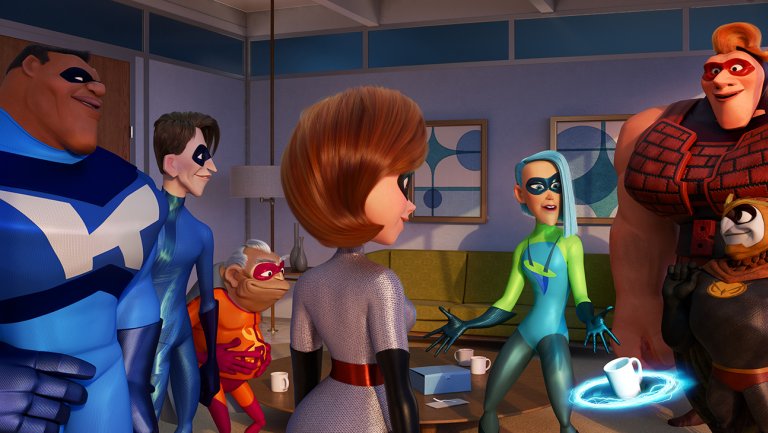 1. The Incredibles 2 (review)- $180M
Superhero fatigue? What superhero fatigue? Clearly that doesn’t mean a thing to Pixar whose long-awaited The Incredibles 2 powered its way to $180M. That’s the largest opening ever for an animated film and the eighth biggest of all-time. The appeal is obvious, right? Pixar made us wait fourteen years (!!!) for a sequel to one of their most popular movies, and it just so happens to be arriving at the height of superhero movie dominance. Plus these are just great family-friendly movies that appeal to kids and adults, with a brand that nearly everyone recognizes. Finally, it also earned $51M overseas for a whopping $231M opening weekend.
2. Ocean’s 8– $19.5M/$79.1M
Ocean’s 8 dropped a heavy 53% in its second weekend for $19.5M and a $79M haul. It’s not bad for the $70M star-studded heist movie, which also has $37M overseas for $116M overall. In the end it could end up right in the same ballpark as 2016’s Ghostbusters, but at half the cost. Budget is the only thing that matters, folks.
3. Tag (review)- $14.6M
I had hoped for a larger opening for the legit hilarious Tag, but $14.6M isn’t bad. That’s not too far off from what the similarly adult-skewing comedy Game Night did a few months ago, and that went on to do $68M stateside. I’m not sure Tag will reach those heights, though, especially with much stronger competition from Ocean’s 8, The Incredibles 2, and Jurassic World: Fallen Kingdom taking away from its direct audience.
4. Solo: A Star Wars Story– $9M/$192.8M
5. Deadpool 2– $8.8M/$294.6M
6. Hereditary– $7M/$27.1M
Armed with some of the best reviews of the year, A24’s horror Hereditary dropped 48% for another $7M and $27M overall. That’s pretty good for the low budget thriller that some think could be a player this awards season, especially for star Toni Collette.
7. Superfly– $6.3M
Sony’s Superfly, a modern update on the classic blaxploitation film from the 1970s, opened better than I would’ve thought with $6.3M. I expected far worse considering the utter lack of star power (Michael K. Williams and Jason Mitchell the two biggest names), Director X behind the camera (real name Julien Christian Lutz), and an utter lack of marketing muscle, but the reviews weren’t terrible and that obviously gave some the encouragement to check it out. At only $16M in budget this could creep its way to breaking even, or to being a low-cost failure.
8. Avengers: Infinity War– $5.2M/$664.1M
At $664M Avengers: Infinity War has moved into fourth on the domestic all-time list, surpassing the $659M of James Cameron’s Titanic.
9. Adrift– $2.1M/$26.8M
10. Book Club– $1.8M/$62M

Let’s check in on Jurassic World: Fallen Kingdom, which is in its second week of international release and already has a remarkable $370M. By the time it opens stateside the dino-sequel will be well beyond $400M already.

The critically panned and long delayed mob biopic Gotti was dumped into 500 theaters and earned just $1.5M.  You might recall this one had a ton of buzz behind it a few years ago when John Travolta first come aboard to play the infamous mobster John Gotti. The years weren’t good to it, though, as the high-profile cast (which included Joe Pesci at one point!) left, and they were stuck with Kevin Connolly (yes, the Entourage actor!) as director. Lionsgate decided against a wide release so it was then picked up by Vertical Entertainment and MoviePass, so this dud is on them.