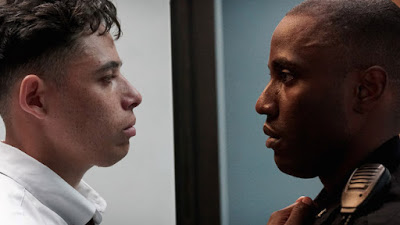 This year’s Sundance Film Festival got off to a bang with a pair of movies centered around police violence. The one with the most buzz is Blindspotting starring Hamilton’s Daveed Diggs. The other, and just as good, was Monsters and Men, a drama that takes a tryptech-style approach to showing the impact one death of an unarmed black man has on three characters.

Writer and director Reinaldo Marcus Green  assembled a talented cast that includes John David Washington (BlacKkKlansman), Kelvin Harrison Jr., Rob Morgan, Nicole Beharie, and two more Hamilton stars in Anthony Ramos and Jasmine Cephas Jones (she’s also key in Blindspotting). The trio of connected stories follow a struggling young father who videotaped the killing of an unarmed black man by police. The second follows a black cop dealing with his identity as a result of the death. And the third centers on a high school athlete inspired to become an activist.

It’s a powerful film that won over audiences and yours truly (my review) at the festival, and I suspect it’s going to create quite a stir upon release. Monsters and Men opens this fall.