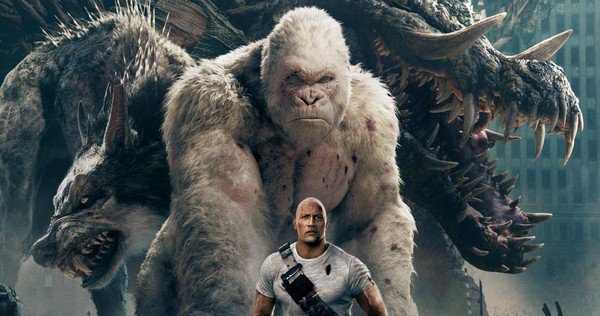 Set your fond memories of the classic coin-op Rampage aside, the big screen summer blockbuster version is an entirely different beast. I spent many mindless hours and many pockets worth of quarters playing the video game at my local arcade, scaling those 8-bit skyscrapers and smashing them to bits as a trio of escaped mutant monsters. And so what if another couple hours of mindless entertainment is had under its name? Rampage is as big, loud, and dumb as you knew it would be, but it’s also undeniably fun and unquestionably awesome. It’s got The Rock saving the world from giant flying wolves. What in the Hell could ever be wrong with that?

Coming off the surprising $1B success of Jumanji: Welcome to the Jungle, Dwayne Johnson finds himself in another video game-based flick that easily entertains. It’s like he’s making up for that Doom debacle from all those years ago. Rampage finds him reteaming with Journey 2: The Mysterious Island and San Andreas director Brad Peyton for another smash ’em up disaster flick of epic proportions. The movie is called Rampage…even if you’ve never played one second of the game you had to know what you were in for. Cliché characters, campy villains, lots of destruction, Johnson sweating from his bald head and his pecs aching to break free from his too-tight shirt. Check, check, check, check, and double check.

Johnson plays Davis Okoye, a primatologist (Stop laughing.) who, wait for it…prefers the company of animals to humans. He’s best friends with George, an albino silverback gorilla he rescued from poachers when the ape was just a baby. David and George have an extraordinary connection, communicating through sign language better than most people, including the pulling off of elaborate pranks. If Timmy and Lassie were a 275lb. primatologist and a gorilla, they’d be Davis and George.

Up in deep space things aren’t so chummy. In what would have made for a kickass sci-fi movie, an experiment on a space station goes awry and a giant mutant rat is unleashed, killing the crew save for one who unwittingly drops canisters of the experimental formula down to Earth, where one lands in the zoo near George’s enclosure. Another finds its way to a marshy swamp full of crocodiles, and another hisses to life in the face of a curious wolf. The effect is like mutagen to a Teenage Mutant Ninja Turtle, making them big, strong, fast, and super aggressive.

That’s about as complicated as the Rampage plot gets, meaning not at all. George and the other infected animals get really big and start wrecking things and killing whatever is in their path. Davis is joined by a rogue scientist (Naomie Harris) who worked on the experiment, known as CRISPR, while her former bosses (Malin Akerman, Jake Lacy) hope to capture the creatures to further their evil goals. Jeffrey Dean Morgan, unable to stop playing Negan for even a second, swaggers through every scene as a federal agent with a smart mouth and a knack for questioning authority.

Over-the-top right from the start, Rampage never takes itself too seriously even for a moment. Thank goodness it doesn’t because the only way this movie works is if you embrace how ridiculous the whole thing is. Laugh at the token military guy who keeps ordering bigger and bigger military strikes on the creatures even though nothing works. Chuckle at the team of hardened black ops soldiers (led by Joe Manganiello, scarred for no apparent reason) sent to their early graves at the teeth and claws of a hungry mutant wolf. It’s like something out of Predator or Kong: Skull Island. And bask in Davis’ unbridled heroism…well, heroism to save his friend George, and by extension the rest of Chicago. Honestly, it does seem like he’s more interested in rescuing his pal than the millions of humans who will die, but let’s not think about that too much. Come to think of it, we really only care about the Davis/George friendship, anyway, so maybe he was in the right.

Surprisingly brutal for a PG-13 movie, there are a lot of really nasty deaths to go along with the city’s devastation. People are squashed, ripped to shreds by claws, swallowed whole, thrown like lawn darts…who knew fighting building-sized crocodiles would be such ugly business? Unlike some other movies, let’s say Man of Steel or Michael Bay’s Transformers, the amount of chaos stays centrally focused so that our attention is always on the characters and we don’t get bored of watching building tumble. It becomes easy to get numb to that much destruction, but Rampage manages to keep it exciting throughout.

There’s room for different kinds of monster movies, and they all don’t need to be brainless exercises in annihilation. Look at a movie like Colossus, which is a monster movie with a lot to say on a variety of topics, and that’s great. We need those kinds of films, too. Rampage is not that movie. Its aspirations are simply to entertain and leave you wanting to plunk down more quarters for the inevitable sequel.