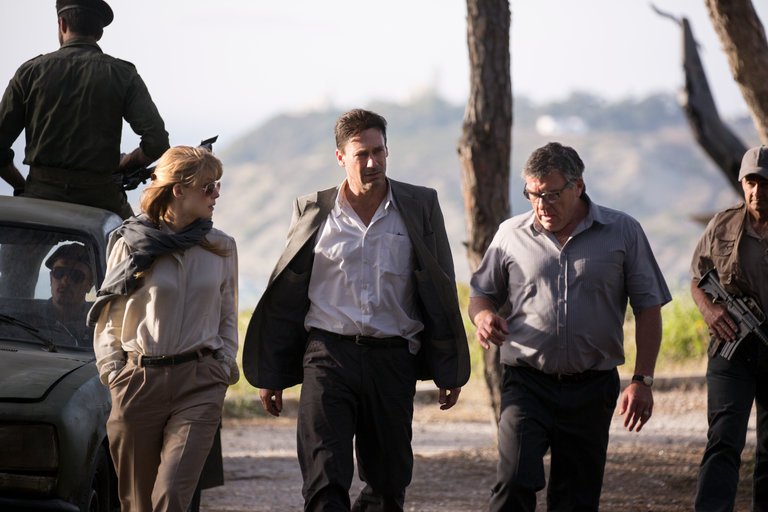 NOTE: This is a reprint of my review from the Sundance Film Festival.

It’s possible last night’s world premiere of Beirut may have been our first real look at Jon Hamm in an action franchise to call his own. More importantly, it may be the start of a new series of political thrillers intelligent enough for adults, and isn’t just about an agent punching his way out of problems. Either way, this is a solid entry and the kind of mainstream, neatly-packaged fare we don’t typically get at Sundance.

Based on a two decades-old script from Tony Gilroy (The Bourne movies, Michael Clayton) and directed with workmanlike efficiency by Brad Anderson (Transsiberian, which you all know I love to death), Beirut follows diplomat Mason Skiles (even his name is franchise-ready), a smooth talker who knows how to get himself out of a jam without using his fists. In 1972 he’s hostin a lavish party in Beiruit with his wife and adopted Lebanese son, who turns out to be the son of a dangerous terrorist. When he comes looking for his boy, everything goes haywire and Skiles’ life explodes in more ways than one.

A decade later and Skiles is no longer a diplomat, he’s a negotiator working small-time labor disputes. He’s also a drunk, but he’s still got skills when it comes to dealing with people. That’s perfect because a mysterious man approaches him, in a bar of course, and offers Skiles a fat sum of money to fly to Beirut and negotiate the release of a kidnapped friend, a high-ranking official, from a terrorist group.  He doesn’t want to go, but feels compelled to. Plus there’d be no movie if he said no, so…

Beirut is one of those movies where everyone has an ulterior motive. The CIA, the terrorists who actually asked for Skiles to get involved, and even Skiles himself. The film is constantly working as a double blind, trying to keep the audience guessing, but it gets increasingly hokey the longer it goes on. There are reasons movies like this don’t get made very often. For every Munich there’s  The Sentinel; these films are really tough to pull off, try as they might to be both topical and entertaining. Beirut walks a pretty good balance, but there are long stretches where it seems Skiles isn’t doing very much. I had to stop to ask myself if the plot even made sense having him involved in the mission.

Fortunately, an exciting final act clears that up, with Hamm bringing his charm, sex appeal, and physicality to the role. We also see a little bit of the Don Draper world weariness hanging on Skiles’ broad but sagging shoulders. Beirut could be the start of a comeback for this old school genre, one that Gilroy himself helped usher into oblivion with his Jason Bourne screenplays. In a way it’d be fitting if this years-old script for Beirut helped change things to how they once were. We’ll just have to wait and see if audiences are ready to turn back the clock.