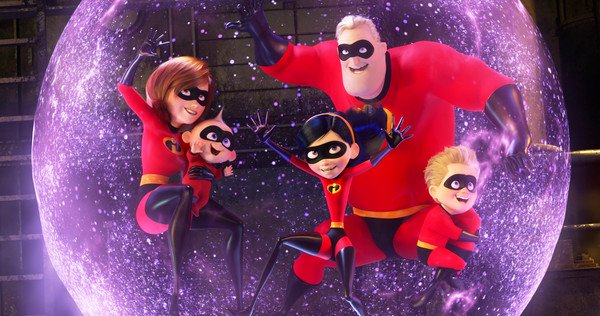 For a while Pixar delighted in keeping sequels to their most beloved films to a minimum, the one exception being Toy Story. But then in rapid succession they became a sequel churning machine, probably at Disney’s behest, and it would be fair to say at least some of the magic was lost as a result.  It took Pixar fifteen years to finally get around to The Incredibles 2, and while there’s good reason to be skeptical everything we’ve seen suggests the wait will have been worth it.

A brand new trailer has arrived and it looks like the superhero family story Fantastic Four wishes it was.  The super-powered Parr family are dealing with loads of new challenges as mom Elastigirl (Holly Hunter) springs into action while her husband Mr. Incredible (Craig T. Nelson) embraces his domestic side taking care of the kids, including newly powered up baby Jack-Jack. We also see their best buddy Frozone (Samuel L. Jackson), fashion designer to the stars Edna Mode (voiced by director Brad Bird), and new character Winston Deavor (Bob Odenkirk) who looks like he has potential to be a bad guy.  Here’s the synopsis:

In “Incredibles 2,” Helen is called on to lead a campaign to bring Supers back, while Bob navigates the day-to-day heroics of “normal” life at home with Violet, Dash and baby Jack-Jack—whose superpowers are about to be discovered. Their mission is derailed, however, when a new villain emerges with a brilliant and dangerous plot that threatens everything. But the Parrs don’t shy away from a challenge, especially with Frozone by their side. That’s what makes this family so Incredible.

Giveaway: Enter To Win ‘Nobody’ On Digital!