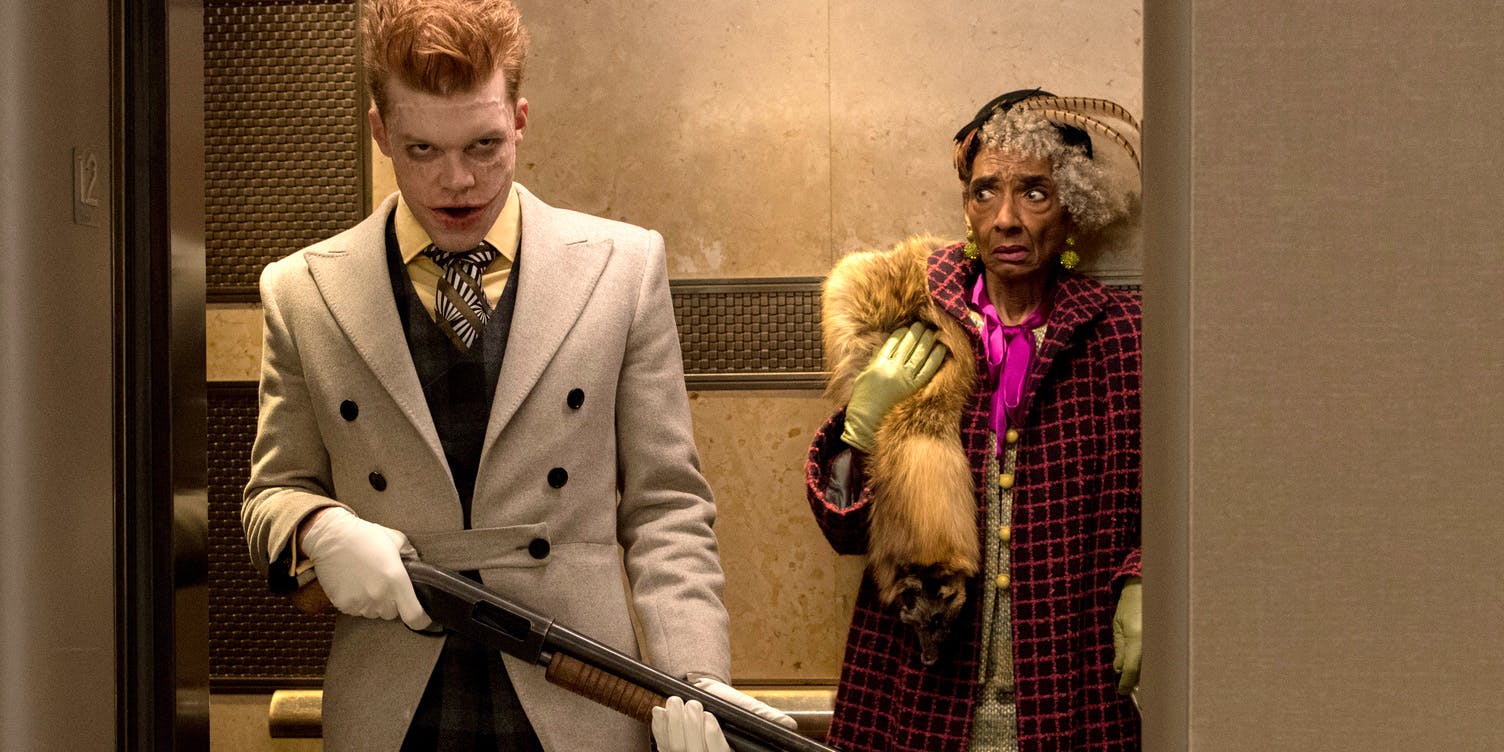 In this week’s Gotham
we get an interesting family reunion and maybe the blossoming of a new love
story that had seeds planted a few episodes ago.

This episode picks up right where we left off – Bruce goes
to visit the headmaster of St. Ignatius and find out if Jerome is there. Turns
out Bruce is a little late and Tetch has already paid the school a visit and hypnotized the
headmaster. Tetch was asking for the name of a particular student – Xander Wilde.
Before leaving, Tetch had strapped a bomb to the headmaster and commanded him
to blow himself up when someone comes asking questions. Jim and Harvey join Bruce in the office and they try to convince the headmaster to put the detonator down,
but wind up being unsuccessful and he blows himself up. Outside of the school,
Bruce tells Jim that Tetch was looking for someone named Xander Wilde. Jim tells Bruce to stop meddling in the GCPD’s investigation and warns Bruce and Alfred that
if Bruce gets involved again, Jim will press charges. It turns out that Xander was
a child prodigy who is now an engineer at a company called Meyer & Hayes.

While this ruckus is occurring at St. Ignatius, Jerome puts
together a mandatory brunch – that Penguin is graciously hosting – with quite
the cast of characters. Around the table are Jerome, Penguin, Fries, Firefly,
and Crane. Jerome has assembled this crew to turn the city into a madhouse, and
once that has happened…he doesn’t care what any of them do to Gotham. Tetch
joins them at the brunch and provides Jerome with some valuable information
about Xander Wilde. 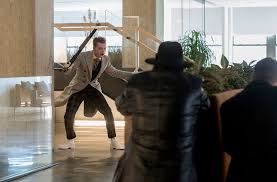 Jerome pays a visit to Meyer & Hayes in search of
Xander, but it turns out that he has never been there – Xander always
communicates with the firm through a proxy. Jim and Harvey get to the firm to
see that it is in chaos, with Jerome running around with a shotgun. The two of
them have a short stand-off with Jerome before Firefly comes and distracts them
long enough for him to slip away. Jim and Harvey find out that the only person
who knew the identity of the proxy was Allan Hayes and that Jerome just…made him
inaccessible for future questioning. Jim realizes that this must be personal
for Jerome and Xander being an engineer might be
inconsequential. Just then Jim notices a picture of Wayne Plaza that includes a
certificate initialed by the engineer – the initials read ‘X.W.’ Jim and
Harvey realize that they are going to have to go talk to Bruce to get some
information, and they may not welcomed with open arms after Jim just told him not to meddle in their case. Jim and Harvey try anyways, and after giving them a
little flack, Bruce agrees to help. Alfred says that Thomas took meticulous
notes of all his meetings, and after a very quick search – he minds a notation
about Thomas meeting with Xander. This notation lists a street, but not a specific
address. Jim is putting together the pieces and realizes that Xander is a recluse
because he is hiding from Jerome, not from the world.

While Jim and Harvey are visiting Bruce, Jerome goes to
Xander’s proxy (whose name is Ecco). He demands to know where Xander is and
threatens her with a knife. She has a plan of her own and knocks Jerome out and
transports him to a concrete cell at Xander’s house. The cell has a camera in
it that allows Xander to watch Jerome. Jim and Harvey go to Xander’s house
which looks like a fortified bunker. It is entirely concrete and there are
cameras everywhere. Jim and Harvey question Xander – who is actually Jerome’s
twin brother named Jeremiah. Jeremiah tells Jim and Harvey that Jerome made his
childhood a living hell – he used to threaten his life and even went as far as
to set his bed on fire. Their mother and uncle realized this and took him to
St. Ignatius to give him a new name and a new life. Jim and Harvey want to take
Jeremiah into protective custody, but he disagrees saying that he will be
safest at his own house and Jerome won’t be able to find him. Jim feels like Jeremiah
is being dishonest with them and realizes that all of the monitors in the room
are now turned off, even though Jeremish was able to see Harvey and him through a
camera at the entrance to the house. Jim turns on the monitors and sees that
Jeremiah is holding Jerome in a cell, and also sees that Jerome’s fellow Gotham
villains have followed him there and are now in the house as well. 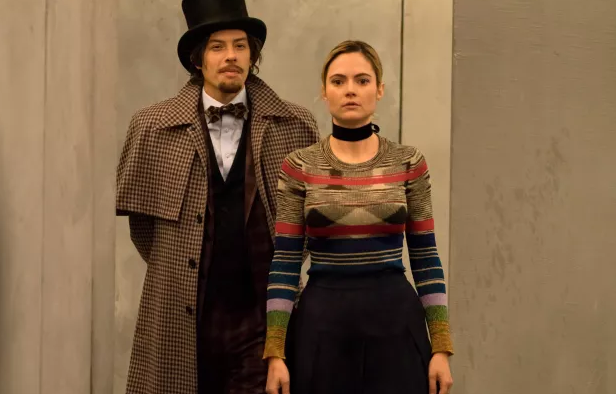 Jeremiah leads Jim and Harvey through the back part of the
house which is apparently a giant maze. Unfortunately for them they run into
Ecco who is hypnotized by Tetch. She kicks Jim and Harvey’s ass and takes
Jeremiah who begs her not to. Harvey and Jim manage to get the jump on her and
knock her out, but not before Jeremiah runs away. At the end of the maze, Jeremiah gets ambushed by Jerome, Crane, and Tetch. Jerome sends Tetch and Crane to kill
Jim and Harvey so he can have some alone time with his brother. During their
conversation it becomes clear that Jeremiah actually made up all of the
terrible things that Jerome did to him as a child and convinced their mother
and uncle they were true. Jeremiah caused everyone that Jerome loved to turn
against him which eventually drove him insane. Jim and Harvey turn the tables
on Crane and Tetch and chase them out of the house. Jerome promises to see
Jeremiah soon and follows them out. Jim and Harvey take Jeremiah to the GCPD
under protective custody.

As Jerome, Jim, and Harvey were out on the hunt for Xander –
Penguin was creating a plan of his own. He thinks that when Jerome flames out,
the Gotham underworld will be his for the taking. Penguin goes to visit Butch
at a bar to recruit him in his efforts. Butch does not take too kindly to
Penguin visiting him and tells him to leave him alone. Butch is only focused on
trying to get his life back and not be the monster that Grundy is. Penguin
doesn’t take no for an answer and comes back later that evening. Penguin brings
some of the swamp water that transformed Butch into Grundy and tells him he can
help get Tabitha back and reverse his condition. Penguin promises that together
they will find Hugo Strange and he can fix Butch. Butch agrees and joins
Penguin. Penguin takes Butch to the villain’s new ‘hideout.’ Everyone is
assembled there and eagerly awaiting the test of Crane’s newest gas. The poor
victim is a businessman and Crane sprays a cloud of the gas in his face. The
man begins hysterically laughing with a huge grin and laughs until he begins
bleeding out of his eyes.Ha 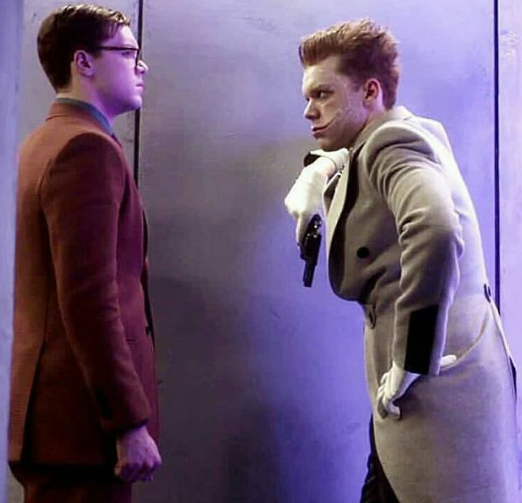 This episode was chock-full of fantastic Jerome moments. Cameron
Monaghan has really embraced the role and has delivered. There is still a lot
of speculation about if Jerome is the Joker or not and it is not really clear.
He certainly has his mannerisms, craziness, and now even has the famous Joker
laughing gas! Now Gotham’s creators
may have found a way to make Cameron Monaghan be able to continue the role and
have Jerome not be the Joker, which they have said in the past he isn’t. Let’s
say Jerome gives Jeremiah the laughing gas, causing him to go crazy and become
the Joker? He then kills Jerome and becomes the clown prince of crime. Plus, if
that were to come to fruition, we may have already met the future Harley Quinn
in Ecco. Jeremiah did say that she has devoted her life to him. Just a theory,
but I have a feeling we will know sooner rather than later the direction that
these two brother’s lives are heading! Honestly, as long as Cameron Monaghan
gets to continue portraying a character that is incredibly similar to the
Joker, or the Joker himself, I’ll be happy.
Lee & Riddler’s
Star Crossed Lovers story arc: “It’s riddle time at the riddle factory” –

Riddler and the crowd disagree with Lee’s position and want
the show to keep going. Lee extends a challenge to the Riddler that he accepts –
if she wins the contest then Riddler must shut down the show, if he wins then
she will spin the wheel. Lee is able to solve the riddle that he presents, but
she manages to trick him into not being able to provide the answer to her
riddle. The answer was ‘I love you’ – but Riddler is worried about Ed’s persona
taking over if he says ‘I love you’ to Lee. So Lee wins and the gameshow is
shut down. Lee goes to visit the Riddler after the show and wonders aloud why
he opened up his club in the narrows. She thinks that it is because he wanted
to get Lee’s attention and that both the Riddler and Ed love her. She wants
Riddler’s help in robbing banks and seals the deal with a kiss. Ha
My thoughts:

Riddler’s gameshow is fantastic and was a great scene to
watch unfold. The wheel of misfortune is perfect for the narrows and for Gotham as a whole. The punishments on
the wheel are absolutely absurd, but I would expect nothing less. I mean what
is more befitting for Gotham, the
Riddler, and the narrows than stapling a barracuda to someone’s forehead as a
punishment!? I am certainly curious about this new dark and scary Lee. Lee has
changed over the last few episodes – first smashing Samson’s hand, now trying
to set up bank robberies and kissing the Riddler. I am interested to see how
her character continues to progress.
Next week on Gotham:
Jerome and co. interrupt the Gotham music festival. Armed
with Crane’s new laughing gas, they are even more of a threat than before.
Jerome demands that Bruce and Jeremiah become their hostages or they are going
to unleash hell onto the city. Bruce immediately accepts, but we’ll see if
Jerome really gets his wish or not.