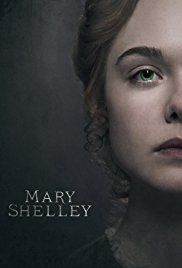 Generally speaking when they make a movie about the creator of an iconic character it’s because they want to tap that well again and know that the public is tired of seeing retreads of the same story. This one, however, appears to be a story actually worth telling. The fact that the creator of one of Horror film and literatures most iconic monsters is a woman wouldn’t be that big of a deal today but when Mary Shelley wrote Frankenstein it was 1818, women were not exactly in a position of high regard or power in the swingin’ 1800s. This is what makes the story interesting. Let’s be honest, even today horror is a boy’s club, a woman that wanted to terrify audiences would most likely be seen as “a little off” at best so how did this young woman produce one of the top 5 classics of horror writing and manage to keep her name on it? I’m not sure how much of the story here is based on hard fact, viewing the trailer it looks like they’ll be explaining the inspiration behind most of the facets of Frankenstein throughout, regardless it’s bound to be a progressive tale that let’s both women and men know what can be accomplished in the face of adversity.

Elle Fanning, a still vastly underrated talent, stars in the titual role and appears to bring her A game, If you pay attention you can even catch a glimpse of Arya Stark herself, Maise Williams in a supporting role. Judgements will have to be reserved until relase but at a minimum this looks like a welcome departure from the prim and proper world of you standard period piece.