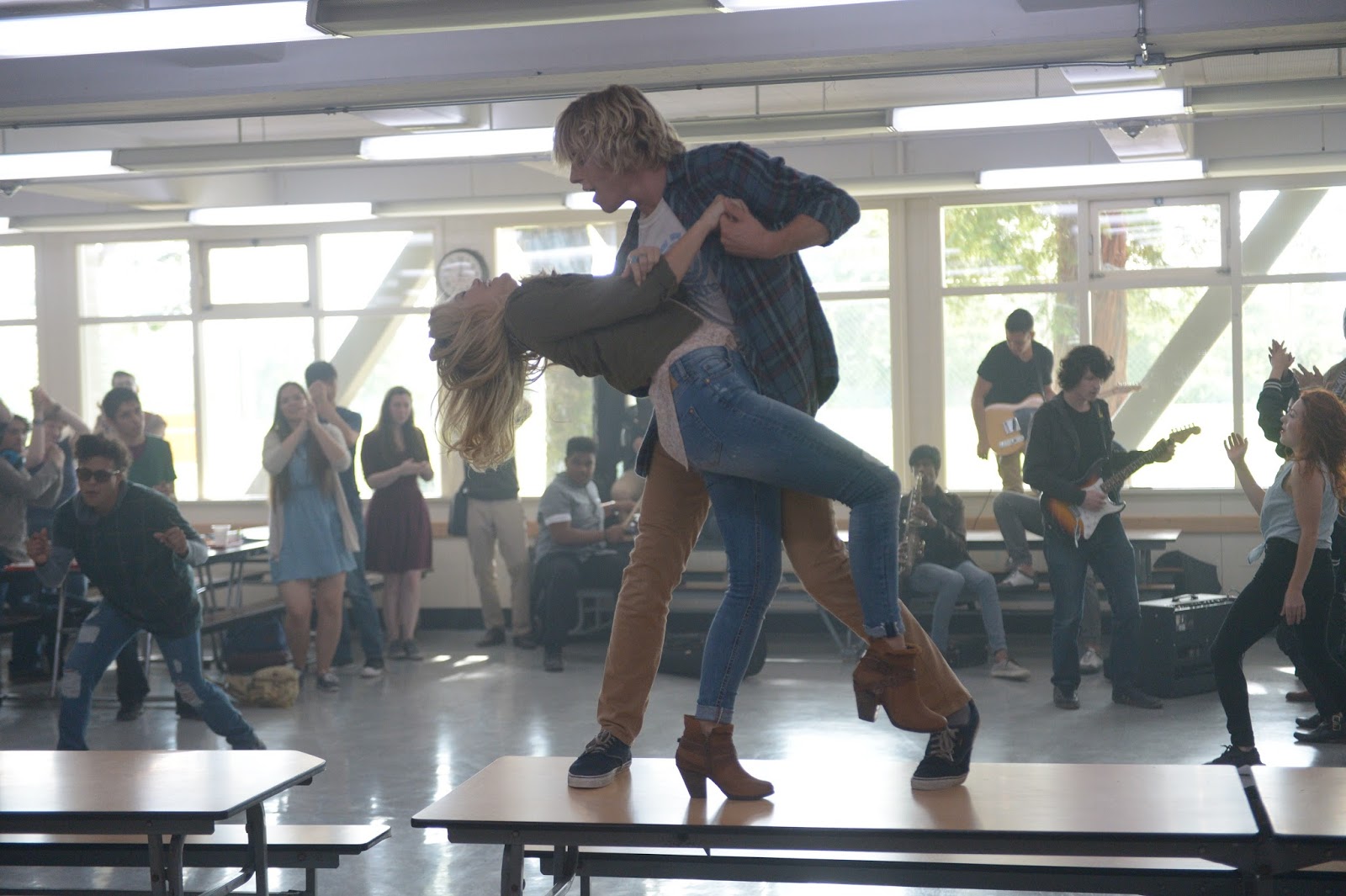 Status Update shows
us how hard high school can be in this day and age. Kyle Moore (Ross Lynch) was
enjoying life in sunny California, surfing and skateboarding with his father
Darryl (Rob Riggle). That is until his parents separated and he moved across
the country to Connecticut with his mother Ann (Wendi McLendon-Covey) and
sister Maxi (Brec Bassinger). Needless to say, Connecticut is nothing like the
California that Kyle knows and loves. Kyle reluctantly heads to Hayden High
School for his first day of senior year and from the get-go, he finds himself
in the crosshairs of the bully jocks that seem to be everywhere in the school.
Of course, since the film takes place in Connecticut, these Jocks are the
varsity hockey players led by their captain and stud hockey player Derek (Gregg
Sulkin).

Derek and his fellow punk jocks welcome Kyle to the school
in a way that would hurt millennials the most – by breaking his cell phone.
Kyle goes to the local mall to get it fixed and that’s where he meets the
eccentric mall cell phone kiosk worker– played by Josh Ostrovsky (The Fat Jew).
He gives Kyle a new cell phone, free of charge and without any activation
needed. That night Kyle notices an odd social media app on the phone called
‘Universe.’ Kyle will soon discover that any update he puts in the Universe app
will come true, in some form or another. Kyle quickly sets out to get the girl
he has his eye on – Dani (Olivia Holt) – all while becoming the most popular
kid at Hayden High.

Status Update is
a film that reminded me of the Disney Channel Original Movies from the mid to
late 90s. All of the characters are over the top, the acting leaves a lot to be
desired, there are tons of goofy scenes and moments, and there are even a few
musical numbers throughout. Yet, at the heart of the film is a story about a
teenager realizing what is truly important in life. Yes, this magical app gives
Kyle everything he thought he wanted, but at what cost? Status Update, is full of ridiculous stereotypes and over-the-top
millennial silliness. There are some enjoyable characters who consistently
provide comic relief like Kyle’s best friend Lonnie (Harvey Guillen) and the
band teacher (John Michael Higgins) – whose dry humor is hilarious. There are
also the ridiculous antagonists like the hockey jocks and Dani’s obsessive
singing partner Brian Massey (Markian Tarasiuk). Director Scott Speer does a
good job employing little methods – having Kyle break the fourth wall and talk
to the audience and showing different snapshots of social media posts and
updates by the characters – to give Status
Update a slightly unique spin. The film attempts to convey an overall
positive and uplifting message – but there is just not enough solid acting,
humor, and originality to make it unique or really worth watching. When it
comes down to it – Status Update
will be a decent Netflix or Redbox option for some teens to watch on a rainy
day, but not much more than that.