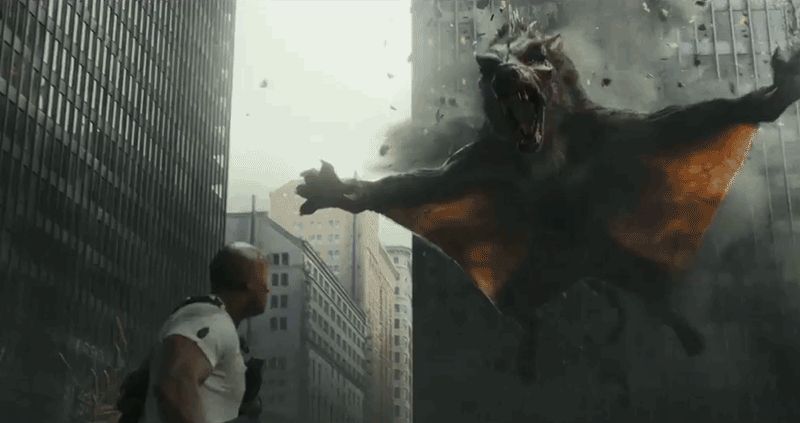 Dwayne Johnson will be in a lot of movies saving a lot of lives this summer, but right now Sony is thanking him for saving their long-dormant Jumanji franchise. Jumanji: Welcome to the Jungle has an obscene $880M at this point, and studios everywhere are hoping he can do the same for them. His best shot might be with the monster-ific video game flick Rampage, which has just launched a brand new trailer.

Johnson, boasting the unique title of a primatologist, must come to the rescue when an experiment goes wrong and unleashes a bunch of building-sized mutant creatures on the city. The catch? One of those creatures is his friend, a formerly gentle ape that now has the power to level everything in sight.  The film co-stars Naomie Harris, Malin Akerman, Jake Lacy, Joe Manganiello, Jeffrey Dean Morgan. P.J. Byrne, Marley Shelton, Breanne Hill, Jack Quaid, and Matt Gerald. Johnson has struck it big working with director Brad Peyton on Journey 2: The Mysterious Island and San Andreas, so why not shoot for the trifecta?

Here’s the official synopsis: Primatologist Davis Okoye (Johnson), a man who keeps people at a distance, shares an unshakable bond with George, the extraordinarily intelligent, silverback gorilla who has been in his care since birth.  But a rogue genetic experiment gone awry mutates this gentle ape into a raging creature of enormous size.  To make matters worse, it¹s soon discovered there are other similarly altered animals.  As these newly created alpha predators tear across North America, destroying everything in their path, Okoye teams with a discredited genetic engineer to secure an antidote, fighting his way through an ever-changing battlefield, not only to halt a global catastrophe but to save the fearsome creature that was once his friend.