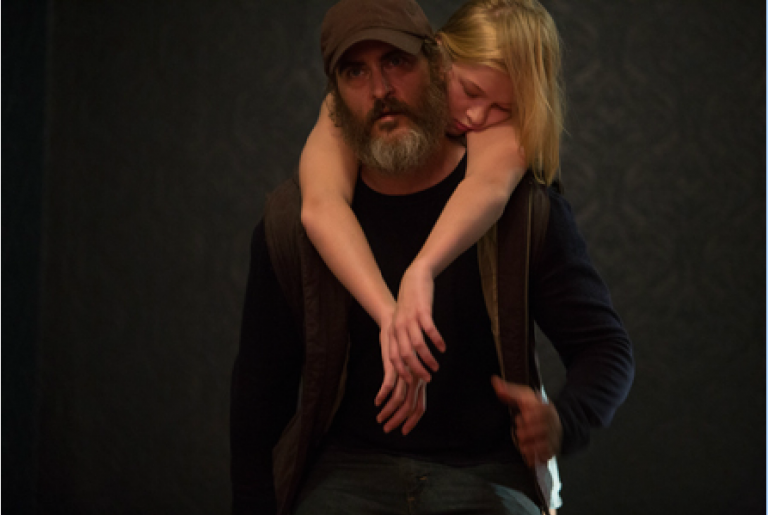 We need to talk about Lynne Ramsay, I think. The Scottish director behind Ratcatcher, Morvern Callar, and We Need To Talk About Kevin doesn’t make a ton of movies. She’s exceedingly choosy; even when she does choose a project she doesn’t always see it through, like the recent western Jane Got A Gun. So when she does follow choose and then follow through it’s a special kind of occasion because, clearly, the film has special merit in her eyes. One can see why she would set her gaze on You Were Never Really Here, which presents itself as just your run of the mill revenge thriller, but as a character study of a killer it is anything but run of the mill.

Adapted from the book by Jonathan Ames, the film is led by an exceptional Joaquin Phoenix who is simply firing on all cylinders right now. Joe, with his heavy beard, bodily scares, and thousand yard stare, looks like walking death and that’s a pretty apt description of him. Ramsay knocks us off balance right from the beginning with a series of images, quick flashes, each more disturbing and confusing than the next. It’s a technique she will return to frequently to flesh out Joe’s backstory; we come to learn he’s a military vet who went through some seriously bad stuff as a child. Now he’s a contract bruiser, or killer if that’s what is called for, and he specializes in finding and rescuing young girls from perverted freaks. Joe’s got issues. He still lives in his childhood home with his ailing mother, and makes frequent attempts to suffocate himself.

This guy isn’t happy, and when he’s on a job committing gruesome acts of violence they only force a recall to his past trauma. Joe’s latest job finds him tracking down a kidnapped girl (Ekaterina Samsonov) with ties to powerful political forces, and when the job is done a conspiracy comes crashing down on his head that threatens everyone he cares about.

You Were Never Really Here is a lean, intense, beautifully edited and acted film that goes far beyond its simple plotting. Ramsay plays with our sense of time and space to keep us disoriented and in the shoes of her wary antihero. Phoenix barely says a word but he doesn’t need to. The depth of sadness and emotional fatigue are written all over his face, just as visible as the scars etched over his bulky frame. Along with Ramsay’s technical precision, it’s Phoenix’s performance that elevates this beyond just another vengeance tale. Watching him as a character this tortured yet driven for retribution, it reminded me of Terrence Stamp in The Limey, another great, economical movie following similar story threads. Jonny Greenwood’s electric, ultra-violent score is the perfect accompaniment to the brutality on screen. The poor girl next to me, far too young to be attending tonight’s Sundance screening, was either covering her face or plugging her ears throughout.

If there are missteps it’s only in that I could have done with fewer callbacks to Joe’s troubled past. The flashes of murder and domestic violence that constantly race through his memory are more confusing than informative. The film works best when stripped down to its barest essentials, and in the case of Joe’s past less is definitely more.

You Were Never Really Here is a knockout film and a welcome dose of art-house flair to the vengeance movie genre. Here’s hoping Ramsay doesn’t keep us waiting quite so long the next time.