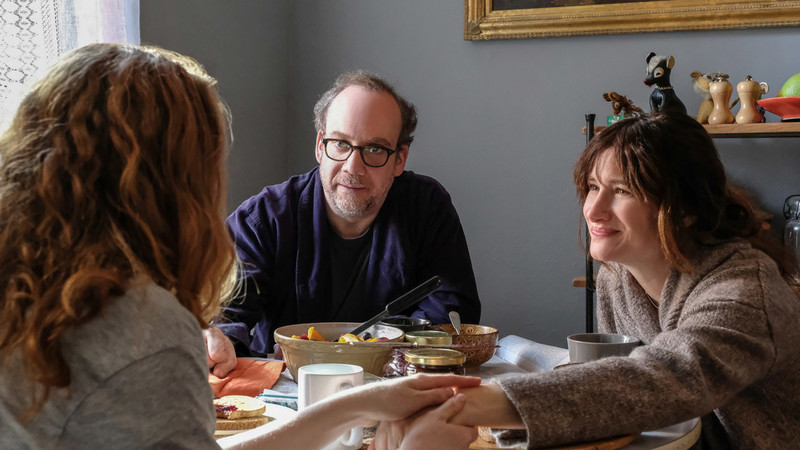 If you’re a fan of writer/director Tamara Jenkins, the wait for a new film from her must be excruciating. She’s good to make you wait a decade between projects; Slums of Beverly Hills in 1998, The Savages debuted at Sundance in 2007, and now her pregnancy drama Private Life, which has now premiered in Park City. Fans of her previous effort will find a lot of similarities in the dutiful couple at the story’s heart, and their lived-in relationship embodied by a pair of top notch actors in Paul Giamatti and Kathryn Hahn. What they experience is agonizing and frustrating and real, but Jenkins doesn’t always commit to it with the same level of authenticity as her talented stars.

Giamatti and Hahn are Richard and Rachel, a married New York couple who have been trying for years to have a child, and have reached the stage of doing anything and everything imaginable to make it happen. They’ve borrowed thousands of dollars, more than either can afford, on fertility treatments that have failed to produce, and it’s taking a toll on their marriage. Of course, there are problems in the relationship, anyway. Both creative people of some success, him a writer her a theatre director, neither has seen that success translate into financial comfort. They still live in shabby rent-controlled apartment in the East Village and are always borrowing money from his brother (John Carroll Lynch) to keep the treatments going. Now they’re moving on to in vitro fertilization, the film opening with the seductive curvature of Hahn’s nearly-nude body…only to have the moment ruined when she’s jabbed painfully by her latest fertility injection. These send her hormones spinning out of control, they’re constantly fighting, and there’s the spectre of adoption looming overhead if all else fails.

Jenkins is right on point taking us into the private lives of a couple going through this, because there are thousands, if not millions, who struggle with infertility every day.  She shines a light into the emotional and physical pain of the ordeal, and the toll it can take on a relationship. We see it often played for laughs in a myriad of comedies; sex that couples literally set a clock to for maximum fertilization potential.  At least in the beginning Jenkins plays Rachel and Richard’s struggles honestly, which make the occasional funny bits funnier than they normally would be, like Richard’s clumsy and embarrassing attempts at sperm donation.

Less convincing is the vast majority of the film’s second half, after their doctor, who is phoning it in at this point, suggests that an egg donor may be the solution. Rachel isn’t having it, and maybe it’s the hormones pumping but she lets Richard have it, “Why don’t you just go screw another woman, then?!” He doesn’t take the bait, but before long another opportunity arises conveniently when their niece Sadie (Kayli Carter), a smart kid who has just dropped out of college, asks for their help. Perfect. They ask Sadie, who has always seen them as surrogate parents in a sense, and she agrees to be their donor, which is like a dark cloud being lifted from their lives. It all sounds like an episode from a bad sitcom; no that it plays out like that. But compared to the quiet, meaningful scenes Private Life so often delivers it just doesn’t ring as true. These are compounded by generally unfunny scenes featuring Molly Shannon as Sadie’s mother, whose anger at her daughter’s decision seems misplaced.

Fortunately, Jenkins keeps her focus as narrow as possible on Richard, Rachel, and Sadie. While the ups and downs of the fertilization procedures is repetitive, the fully-formed characters portrayed by Giamatti and Hahn are the kind we don’t get in very many mainstream movies. Netflix picked up the rights to this one and they were the best avenue for it. I can’t imagine how you sell this movie to casual audiences other than to push its lead stars, who are  brilliant as always. The details of their little New York life, full of books and papers and hospital visits, almost finds them shielded in their own world.

Clocking in at 127 minutes, Private Life does start to take a toll. While there’s a lot of good here, the instances where Jenkins misfires stick out like a sore thumb, and the lengthy run time makes you wish she had cut what doesn’t work. Basically if it doesn’t have Giamatti and Hahn it can probably go.