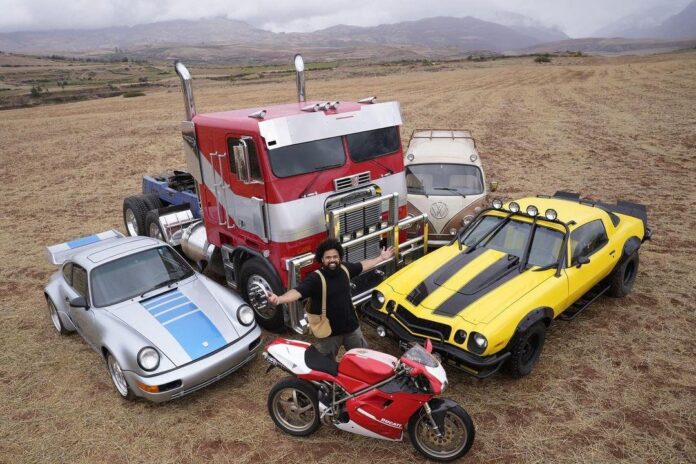 Transformers: Rise of the Beasts director Steven Caple Jr. has done a major blockbuster film before, notably Creed II, but he’s especially stoked about being part of the Transformers universe. Take a look at the big smile on his face as he reveals our first look at the Autobots and Terrorcons in their alt vehicle modes, including Optimus Prime, Wheeljack, Bumblebee, and the villainous Scourge.

The first image features a smile Caple surrounded by Autobot leader Optimus Prime in his classic Kenworth k100 semi truck, plus Bumblebee as an off-road variant of his yellow Chevrolet Camaro. Also in the pic are the female Autobot known as Arcee in her red Ducati 916 motorcycle form, Wheeljack as a brown 1964 Volkswagen Classic Devon Camper, and Mirage as a slick silver & blue Porsche 964. 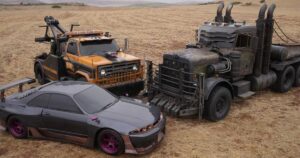 In the second image, we get the villainous Terrorcon leader Scourge as a black Kenworth JF logging truck. Nightbird, who in the cartoon was a female ninja who only made one appearance, is in the movie now as a black-and-purple Nissan Skyline GT-R R33. And the orange tow truck I’m unsure of, but it could be Tow-Line, or perhaps a remodeled version of Onslaught who was last seen getting killed in Transformers: The Last Knight? I’m guessing on this one.

So far we have yet to see how the beast-like Maximals will look but I’m hoping Caple can reveal that next.

‘By All’: Yahya Abdul-Mateen II To Star In Defunded Police Crime Thriller From ‘Creed II’ Director

Next ‘Transformers’ Titled ‘Rise Of The Beasts’; Confirmed As ’90s-set ‘Beast Wars’ Film