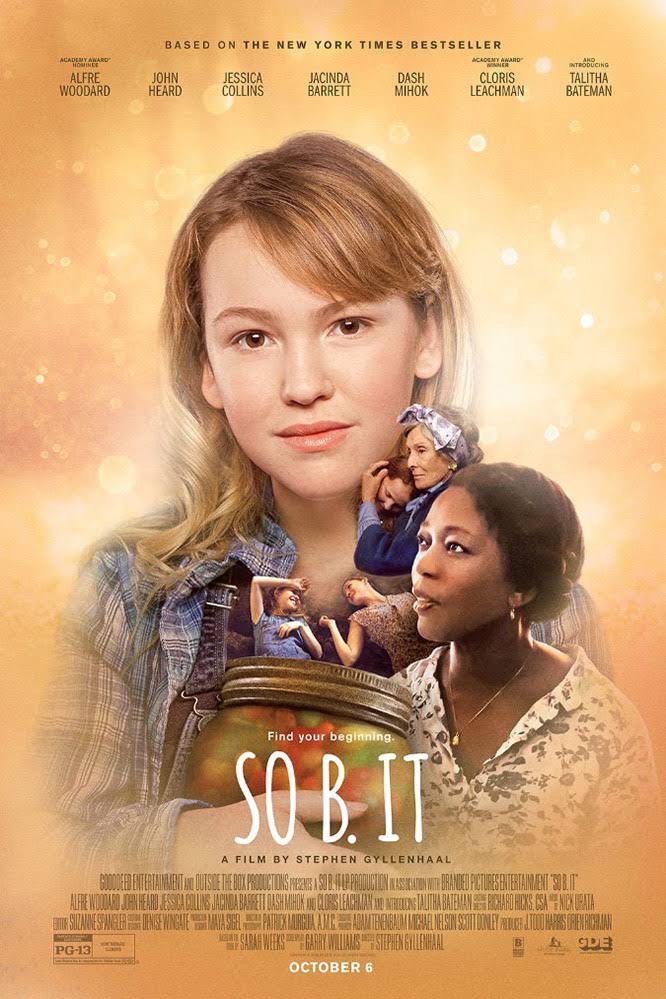 So B. It is a movie that’s based on the 2004 children’s novel of the same name. It follows the story of a young girl named Heidi It, played by Tabitha Bateman, as she leaves the comfort of her own home, which is looked over and ran by neighbor/caregiver, Bernie, played by Alfre Woodard. She advertently leaves to travel across the country to find out the the identity of her mentally disabled mother, while in an also, inadvertent attempt to discover her own.

This movie turned out to be a pleasant surprise for me. The biggest reason as to why this was was due to the trailer. Now, this may very well have everything to do with my own experiences, preferences, judgements, etc… but, when I first heard about this movie and saw the trailer, it didn’t scream “MUST SEE” to me. I had never read the book, in fact, I didn’t know that it was based on a book until after my viewing of the film. So, that excitement and feelings of nostalgia that other people who did read the book have for this movie, wasn’t there for me; and after, viewing the trailer, it still wasn’t necessarily there.

With that being said, I’m always up for pretty much anything in terms of movies, even scary/horror movies given the proper situation, i.e. in a place where I am the controller of the environment instead of a victim to it, but getting back to the film at hand, I must say that I genuinely enjoyed it. The biggest thing that the movie has going for it is the acting, and I think that it’s enough to sell the film. The film is meant to tug at our heart strings and make us feel emotions that we often try to hide in our everyday life. Everyone truly did a phenomenal job in their roles.

Alfre Woodard, as the caregiver to a young girl and her Autistic mother while also dealing with her own mental illness, agoraphobia, or a fear of the outside, does a great job with not just the emotional acting, but when her role calls for more physicality to her acting, as her character is forced to deal with her illness head on, she shines that way too, but, then again, it is Alfre Woodard, so, it’s all but expected. The on-screen relationship that she has with young Tabitha is incredibly believable, and it leads me to believe that the two actors definitely formed some sort of bond while on set. Tabitha, as the young, fierce, independent, but also, lost and sometimes scared girl doesn’t miss any of her emotional beats. To be acting up against someone like Mrs. Woodard  had the wrong person been casted they could have very had been out acted by the veteran herself, but Tabitha truly holds her own. When she’s meant to be happy, we revel in it. When she’s meant to feel alone, and scared. We feel it. We she’s meant to be sad, we cry right along with her. She is someone that I definitely think that you should have on your “up and coming, young actors” list. I’m very interested to see what the future has in store for her.

Jessica Collins, as the Autistic mother to Heidi, I thought was extremely believable. Now, I don’t
want to speak from a place of a lack of knowledge, but since I know that there is wide spectrum for Autism, and because that is something that I am not well versed in, I can’t speak to the authenticity or accuracy if her portrayal of someone with Autism, but like I said, she did do really good job of convincing me that she was mentally disabled.

Everyone else in the cast, from Jacinda Barrett, to Dash Mihok, Cloris Leachman, and the late John Heard, people that Heidi meets on her journey, along with the people already mentioned, all helped to collectively create a film that could have very easily had been too contrived and tropey to the point where it’s a turnoff to people who don’t usually go for kind of stuff, but I do think that is something that everyone will enjoy.

Another pleasant surprise that I wanted to bring up actually came up after the end of the film, when the credits were rolling. Under the director title, I saw the name “Gyllenhaal,” “Stephen Gyllenhaal,” to be exact. “Gyllenhaal” isn’t a name that one sees often, thus it was much to my surprise when I found out that Jake and Maggie Gyllenhaal’s father was the man behind this film. So, to my future father-in-law, thank you for making a film that definitely exceeded my expectations.