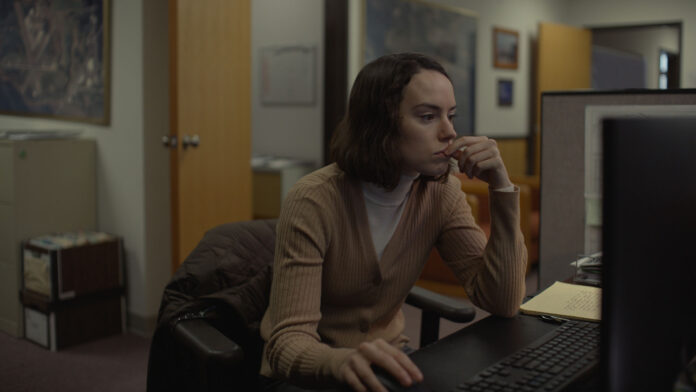 If Daisy Ridley wanted to get as far from her Star Wars past as possible, this was the film to do it. A low-key dramedy about depression, intimacy, and quirky people with a need for human connection, Sometimes I Think About Dying has its charms and will connect with others who feel isolated and alone even when in a crowd of friendly faces. Despite a couple of likably klutzy performances, it also feels staggeringly incomplete and tailored for the festival’s Opening Night audience, who will likely forget about it in a sea of similar films in the coming days.

Ridley plays Fran, a deeply introverted woman eking out a very quiet existence in a small coastal Oregon town. Fran is shy, a little too perfect for this almost-desolate place that seems to exist on the corner of now here, and yet her favorite place might be the place where she’s the most uncomfortable: work. On a daily basis she tries to make herself as invisible as possible in the tiniest, weirdest workspace this side of The Office. It’s a place full of big, wacky personalities, where there’s always an excuse for someone to bring cake or bagels or donuts to the office. Fran fits in there like a piece of decoration. She’s there, but not really there, silently working on her spreadsheets and order forms.

And then there’s Robert. Played by Ramy actor Dave Merheje, Robert is like a breath of fresh air. Perhaps it’s because he’s come sweeping in from the big city, but Robert manages to be as awkward as everyone else without making it look like a social handicap. Although their initial encounters are predictably odd, Fran and Robert discover, through a chat conversation about order forms and favorite cheeses (cottage cheese is a curd!!), that their senses of humor are aligned. They somehow back into a movie date together, and following that, a slice of pie at a nearby diner.

The interactions between Fran and Robert early on are undeniably sweet. Who doesn’t like to watch two introverted, clumsy people find each other? While we only learn more details about Robert, what we see of this new friendship’s impact on Fran is how it dares to open her up to new possibilities. That’s a scary prospect for some people. It could mean finding love, yes, but it could also mean allowing others to hurt you. What Robert doesn’t know is that Fran has very vivid thoughts about dying. She’s not suicidal, or at least not yet, but she frequently ponders dying in increasingly strange ways. That’s not the kind of thing you blurt out on a first date.

Based on the short film by writers Stefanie Abel Horowitz, Katy Wright-Mead and playwright Kevin Armento, Sometimes I Think About Dying features beautifully staged, surreal images of Fran’s colorful imagination. These shots have a staying power, thanks to director Rachel Lambert and cinematographer Dustin Lane and art director Robert Brecko, that you wish extended to the rest of the film. It’s not to say there aren’t memorable interactions among the characters. Lambert and Co. have found something in that little office space that could be mined into sitcom gold. Fans of Meg Stalter will LOVE her as Isobel, the grating, overly loud office boss whose voice is like an earthquake in such a tiny place. While we don’t get to see it explored enough, everyone there has potential to be a character that can function as a lead of their own. A spinoff just set in Fran’s workplace would be a wonderful thing.

Even clocking at just 90-minutes or so, the film does test one’s patience. There’s very little urgency to anything going on, and we get very little insight into Fran which can be frustrating. When her closed-off nature leads to a big blow-up with Robert, it’s hard not to take his side even as he comes across as pushy. Ultimately, the resolution is pat and unsatisfying and comes out of nowhere. It could be the filmmakers wanting to express that depression, which Fran clearly suffers from, has no “happy ending” answer. That’s a fine message to have but it doesn’t make for the most hopeful way of starting the audience’s festival experience.