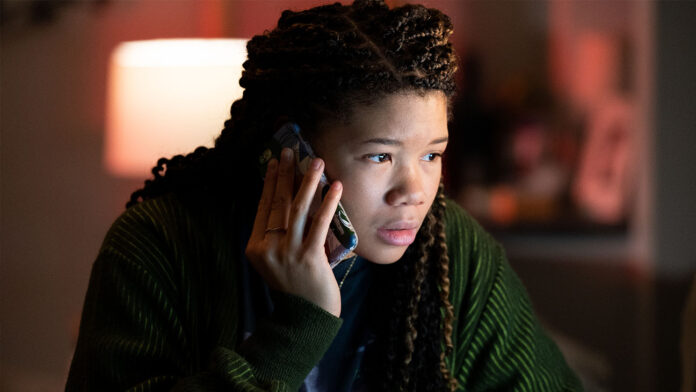 If you stare at computer screens all day, it’s possible the “screen life” genre of thrillers has never been for you. That’s despite 2018’s Searching, a genuinely good film led by John Cho as a father using a wealth of Internet and social media tech, badly since he was a clueless Gen Xer, to find his missing daughter. The film was both critically acclaimed and a box office hit, and now five years later we have its standalone sequel, Missing, which flips the tables and keeps in mind advancements both in tech and our acceptance of the surveillance state. But similar to its predecessor, Missing is anchored by a strong central performance that overshadows the visual bells and whistles, and somewhat excuses the ridiculous number of twists and turns.

That central performance is by Storm Reid, who plays rebellious teen June Allen. The film begins with a cheeky nod to the previous film that its fans will get a chuckle out of, but then it switches gears to home video of a young June sharing a happy moment with her father (Tim Griffin). That moment is interrupted by June’s mother, Grace (Nia Long), whose concern seems to be more for the expensive camera equipment. This cheery flashback soon gives way to a somber tone as images of medical records and Google searches tell us that June’s father is no longer there.

Twelve years later, June is a high school grad anxious to have the house to herself. Grace is set for a Colombian vacation with her new man, Kevin (Ken Leung), who June isn’t in any mood to get to know. Mom is overprotective as usual, and based on June’s brief, dismissive text messages she’s not trying to hear that mess. A flurry of Instagram posts, TikTok videos, and more shows June throwing a raging booze-filled house party at the crib, stupidly planned the night before Grace is to return home. But when neither Grace or Ken is at the airport for June to pick up (a greeting she planned to make a viral video from), she begins to worry. With no sign of her mother anywhere, June does the only thing she knows how which is to trace her digital prints using the tools on her home computer.

Immediately, the dynamic is different in Missing than it was in Searching, and it alters the film’s momentum tremendously. June isn’t a befuddled old man pawing at his mouse pad like John Cho was in the previous movie. As someone whose entire life has been surrounded by this tech, June knows the tricks, and how to maneuver around obstacles. It isn’t long before she’s figured out how to access Ken’s passwords and bust into his Gmail, using a scarily effective tactic that could probably be used in real life. She gets assistance from folks on the ground, too. Her mom’s lawyer pal (Amy Landecker) and an FBI agent (Daniel Henney) are basically useless, even though they are in the best position to help. Instead, June gets the most out of her best friend Veena (Megan Suri) who is also fairly tech savvy, and Javier Ramos (Joaquim de Almeida), a jovial TaskRabbit user in Colombia who does most of the actual footwork because June can’t be there herself.

The thing about screen life movies is they all ask you to play along with how absurd some of this stuff is. The coincidences pile up pretty quick, and if you aren’t invested right away you’ll start wondering just how much bandwidth this mystery really has. Fortunately, Missing keeps the pace moving briskly, and hits you with one stunning reveal after another that reorients your perspective and keeps you clinging to the edge of your seat. Is anybody exactly who they claim to be? One of the unspoken narratives in these screen life movies is that we all hide behind the computer screen so as to become whoever we want whenever we want. Nobody is themselves, and that creates a natural distance when people are confronted face-to-face. The emotional gap between June and Grace isn’t just because of her deceased father.

Problems that plagued Searching haven’t been cured by writers/directors Nick Johnson and Will Merrick, editors on the first movie now making their directorial debuts. Working from a story idea by Aneesh Chaganty, the duo are repeatedly coming up with ridiculous means for there to be cameras everywhere and anywhere, even when it makes no sense. Sometimes, as in the final sequence when the true villain has been revealed, they just give up the goose and shoot it like a typical thriller, which is a bit jarring. But one thing Johnson and Merrick do really well is showcasing how accustomed we have all become to opening our lives to being surveilled. From Ring security to Siri, we’ve allowed every aspect of our lives to be monitored and most of us don’t even think about it anymore. Fortunately, Missing moves way too fast to contemplate this for very long. But given the important co-starring role that Siri does have, it makes one wonder if you ask Siri what its favorite movie is, will she answer “Missing, of course.”