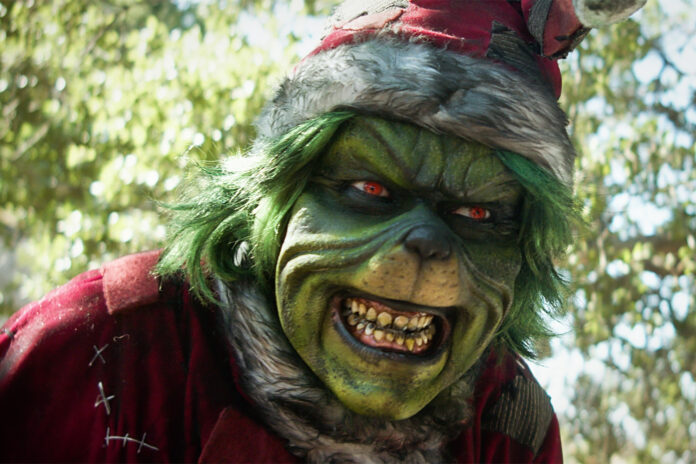 If you’re anything like me you have an annual tradition involving a certain green, Christmas-hating creature and if you’re anything like me you probably have seen it enough times to quote it word for word. But as a horror fan have you ever wondered how that tale could play out if he took his hatred for the holiday to a darker place? Well in steps Steven LaMorte’s holiday parody The Mean One to take a stab at answering that question. Written by Finn & Flip Kobler this parody skirts extremely close to the characters we know without crossing into liable territory and that gives us some gems like Cindy “You know who” and “Doc” Zeus as well as the Mean One himself looking a lot like a bloodsoaked version of Jim Carrey’s Grinch from How The Grinch Stole Christmas. Now I love a good parody and bonus points if it’s soaked in blood so when I saw the social media hype for this one I had to give it a shot because generally, we don’t get many of this particular sub-genre aside from The Banana Splits Movie (2019) and the upcoming Winnie the Pooh: Blood and Honey (2023). I was really hoping this one would check all the boxes for me.

Years after her mother was murdered by a ravenous green creature in a Santa suit, Cindy (Krystie Martin) and her father Lou (Flip Kobler) return to their home in the sleepy little mountain burg. With Christmas approaching and the Mean One once again terrorizing the town, Cindy is determined to trap and kill the beast returning the holiday to the residents of New Town.

Independent horror has seen a win lately with Terrifier 2 making a killing at the box office so the casting of David Howard Thornton as the “Mean One” should instantly make this a viral success. I mean honestly, that’s what initially hooked me. Now, I know I shouldn’t be expecting an Oscar-worthy script but this story was thin. The only real saving grace for me was Art the Clown himself as the “Mean One” but other than that I was fighting to stay interested. I’ll admit I did dig the training montage of Krystie Martin transforming into the final girl and some of the kills were good if you remove the extremely bad CG blood. Why not go practical? Eh, that’s a pet peeve of mine and an argument for another day though. I always like to support low-budget horror and sometimes you get some cool little flicks but this one just didn’t do it for me.

I’m not sure if it was the clunky dialogue, the shoehorned love story or the poorly executed CG but I found myself really struggling to pay attention to The Mean One, and boy did I try. Believe me, I really do love my B movie schlock just like the next guy but this one just didn’t have the charm most of those films do. There’s a fine line between potential cult classics and unwatchable. This one fell on the latter for me. Don’t get me wrong though, there are obviously some fans out there because this thing is rocking a 7.6/10 on IMDB but I can assure you I’m definitely not in that demo. If you want to give this one a shot yourself though it’s in select theaters now and I’m sure streaming platforms will follow.

Following In ‘Winnie The Pooh: Blood & Honey’s’ Footsteps, Bambi And The Grinch Have Horror Parodies On The Way