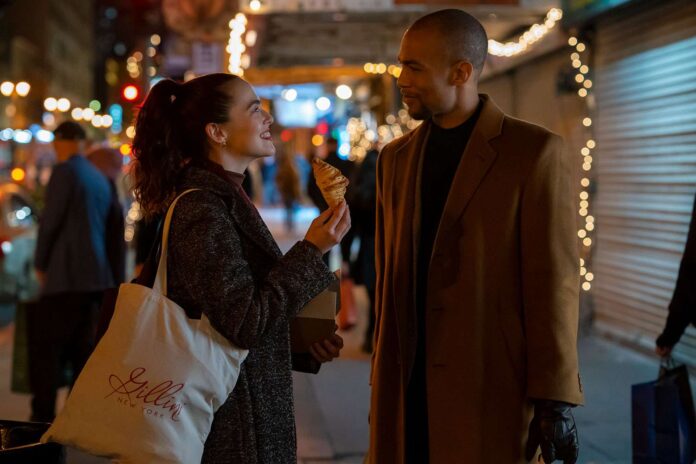 I’m sure I’m not alone in thinking this, but Zoey Deutch is a joy to watch in every single movie she’s in. She has the charming presence and talent of a classic movie star,  which makes her role in the upcoming rom-com Something from Tiffany‘s worth looking out for when it arrives on Prime Video.

Based on the book by Melissa Miller and produced by Reese Witherspoon’s Hello Sunshine label, Something from Tiffany’s stars Deutch as a woman who receives the engagement ring meant for another, causing the paths of two couples to intersect in funny and surprising ways during the holidays in New York City.

In other words, there will be some couple swapping going on here. Don’t expect the same lovers to be together by the end of the movie.

Deutch is joined in the cast by Kendrick Sampson, Roy Nicholson, and Shay Mitchell.

Behind the camera is Daryl Wein in his follow-up to 2021’s apocalyptic comedy, How It Ends.

Something from Tiffany’s hits Prime Video on December 8th.

Nothing compares to the magic and excitement of the holidays in New York City, where the streets blaze with lights, windows dazzle, and a special box from Tiffany could change the course of a person’s life. Or several lives. Rachel and Gary (Zoey Deutch, Ray Nicholson) are happy enough but not quite ready for that big commitment. Ethan and Vanessa (Kendrick Smith Sampson, Shay Mitchell), the perfect picture, are just about to make it official. When a simple mix-up of gifts causes all of their paths to cross, it sets off a series of twists and unexpected discoveries that lead them to where they’re truly meant to be. Because love–like life–is full of surprises, in the holiday romance Something from Tiffany’s.