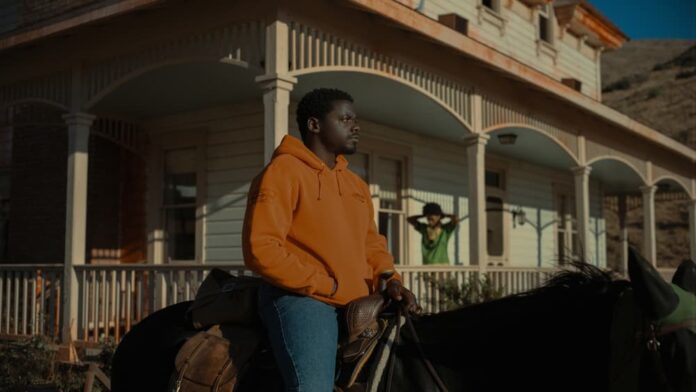 The third time happens to be another charm for Jordan Peele’s ongoing cinematic dynasty. The director’s latest, Nope, turns a corner away from the horror genre he mastered in Get Out and Us, but the 43-year-old uses this sci-fi epic to prove he has more up his sleeve than racially conscious scare. Nope still captures the same spectacle, thrills, and comedic beats we’ve come to know from Peele while staying on message.

At the heart of the highly secretive production and plot, is Daniel Kaluuya’s OJ Haywood. The eldest child of Otis Sr. (Keith David), he now runs the family ranch and Hollywood horse training facility with little help from his sister, Emerald (Keke Palmer), after weird things keep happening in their area.

Next door to their ranch is Jupiter’s Claim, a frontier town amusement park owned by former child actor Ricky ‘Jupe’ Park (Steven Yeun). Still reeling from his own trauma, he works with OJ when the Haywood ranch enters financial hardship. Without spoiling anything, this is where Peele allows the conventions of horror to take over, cutting between Jupe’s memory and his current rewriting of his past. Peele has the most to say with Yeun’s portrayal and should be the most dissected character in the film when Nope is inevitably discussed by cinephiles.

Despite the trailer only hinting at it, Peele has made an alien invasion movie. Like most of Peele’s work, the film benefits from a second viewing to allow for the metaphors to fully sink in. Visually, Peele has never been better. He takes audience participation and anticipation and plays off of it beautifully on the biggest screen you can find with unexpected jump scares and bright colors amid a vast and desolate landscape.  Stepping away from pure horror, Nope feels like a Jordan Peele film while still invoking the early works of Steven Spielberg a la Close Encounters of the Third Kind, Jaws, and even The Goonies.

Where he really shines, though, is with his talented cast. This is Peele’s second time working with Kaluuya after Get Out and their familiarity with one another shows. Kaluuya says a lot without saying much, embodying the quiet cowboy type amidst the strangeness of a horror sci-fi film. While stoic for most of Nope, he eagerly leans into the film’s natural comedic beats.

If Kaluuya anchors the film, Palmer’s enthusiasm propels it forward. In one of the year’s most electrifying performances, Palmer knows exactly how to get the viewer on her side with just an over-confident eyebrow movement. Micheal Perea also gives a hilarious captivating take on the “tech guy” troupe as a Geek Squad-esque employee who helps set up the Haywoods’ security camera system.

Some critics may say that this has less of a vision than Us or Get Out. While Nope feels like his most ambiguous film to date, the scale and pure spectacle of this production indicate Peele is just getting started.

Nope is in theaters Friday.