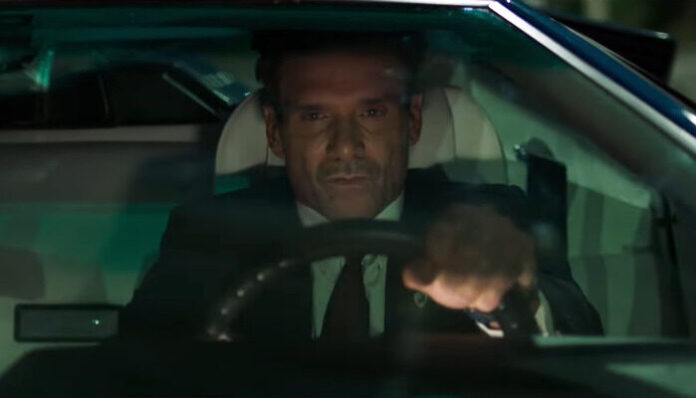 Think, if you were going to see a movie about automotive legend Ferrucio Lamborghini, designer of one of the most iconic luxury brands of cars in the world, what kind of film would you hope it to be? Undoubtedly, you’d want it to be fast; showing the fast cars, fast women, and fast lifestyle of someone who came to define speed in all of its forms. But that’s not what we get from writer/director Bobby Moresco’s biopic Lamborghini: The Man Behind the Legend, which, despite a game performance by star Frank Grillo, never gets out of neutral and tells the least interesting version of Lamborghini’s story possible.

Often I’ve criticized music biopics that fail to attain the rights to the subject’s music, because it leaves them kneecapped in a way that’s impossible to overcome. The same goes for a Lamborghini movie that is clearly constrained by its miniscule budget. While we do get a couple of scenes of Grillo behind the wheel of the flashy vehicles, they are brief and in one case used as a sad metaphor for his rivalry with Enzo Ferrari, played by Gabriel Byrne, who does little more than smirk in the film.

Lamborghini: The Man Behind the Legend is largely about Ferrucio and his start as the designer of high-end tractors. That’s right. Tractors. Played for a large chunk of the film by Romano Reggiani, the young Ferrucio’s humble beginnings are in stark contrast to his oversized ambitions. We see him risk everything, from his family’s life savings to his personal relationships, to make the Lamborghini name something to be remembered. But it’s not until an insulting encounter with Ferrari, “Go back to your tractors”, that Ferrucio decides to step up his game and challenge the greatest auto-maker in the world.

Clocking in at just over 90-minutes, the film never has enough time to fully explore who Ferrucio was or his motivations other than a desire to find “perfection.” Moresco, an Oscar-winning co-writer of Crash, unsuccessfully attempts to cram as much as possible despite the time and budgetary limitations. Ferrucio’s complicated personal life, which involves infidelity, betrayal, and estrangement from his wife (Mira Sorvino) are teased but never feel important. The same goes for a looming workers strike that threatens to destroy everything Ferrucio has built. And yet, we are expected to believe that these things play a key role in Ferrucio’s eventual downfall, which comes in the blink of an eye just moments after the successful launch of the Lamborghini 350 GT in 1964. There are multiple threads missing that connect all of these aspects of Ferrucio’s life and career.

On the plus side, Grillo takes this rare opportunity to play a dramatic lead role and runs with it. A classic tough guy who would’ve been right at home in the ’80s and ’90s golden age of action flicks, Grillo dials it down a notch but still shows the confidence of a man with big dreams who will risk anything to see them come true. If only Lamborghini: The Man Behind the Legend was a film worthy of his performance. Hopefully, Grillo will get more opportunities down the line.