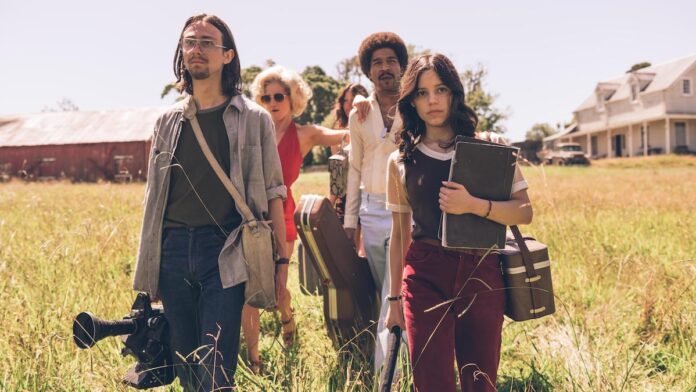 Horror isn’t always my thing, but I do like a good slasher. And lately, the more artfully done the slasher flick the more it speaks to me. So I’ve been anxiously awaiting X, the latest from director Ti West, his first in the genre in over a decade. West, who has proven how good he is at ratcheting up tension with films such as The Innkeepers and The House of the Devil, has delivered a blisteringly cool grindhouse flick that’s as funny in the build-up with its movie-within-a-movie premise as it is wickedly violent in the payoff.

West takes multiple avenues to building up the anxiety effectively, playing on conflicts within the group, mostly stemming from Lorraine’s disgust, to the aged owners of the property, ornery Howard (Stephen Ure), and his wife, Pearl, played by Goth in a double role. Issues of fame and the desire to be famous aren’t just regulated to the young actors, either, as West paints a deadly picture where the desire to be famous can be corrosive. He also plays on the vast age differences between the characters. If you’re someone who finds really old people a bit squeamish, as I am, then this movie is going to make your stomach churn. I get it, that’s not a very cool thing to say but let’s be honest, old folks can be creepy and a bit gross. West knows it and is dialed right into making them as offensive as possible.

The film is quite a slow burn, though, and it might not be everyone’s cup of tea. It moves at the deliberate pace of Quentin Tarantino’s Death Proof or Texas Chainsaw Massacre, luxuriating in the period details (Jackson’s fro is killer!) and in the interactions of its characters. But I find this way of doing horror to be incredibly rewarding, adding rich texture that makes the grisly final stretch worth the wait. Plus, the script and some of the visual gags are incredibly funny, especially in the cross-cutting between reality and the ridiculous porno movie they’re filming. West uses a variety of inventive angles to find ways to amp up the humor and the anxiety, the most delicious of which involve hungry gators in the nearby swamp. Whether shot from an eerie overhead or from over the shoulder, West has me wanting him to do a monster movie or killer gator flick next.

While all of the performances are fun in their own way, the movie is built around and owned by Goth. She’s the busiest by far, playing two sides of a glory-seeking coin. How often do we get to see an actress play both predator and prey against herself in the same movie?

The best really is saved for last, though. While it takes some time getting there, once the body count starts stacking up the kills will have you thirsting for more. Fortunately, as we learned recently from the film’s premiere, West has already shot a prequel, Pearl, that A24 will release in the future. So those of us who have been wanting to see West make his mark on horror again won’t have too long to wait. It’s exciting, the prospect of X growing into a ghoulishly entertaining retro horror franchise. Welcome back, Ti West!