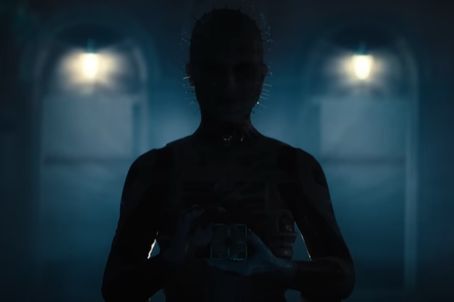 When you think of the Mt. Rushmore of horror icons surely Pinhead is right up there. Yeah, Michael Myers, Kruger, Voorhees, Leatherface are the titans, but Pinhead, Pinhead is an image that stayed with you and certainly deserves a spot at the top. This legacy is exactly why people were surprised when Hellraiser was rebooted with some changes made to that lead Cenobite. The reboot itself was inevitable, especially after sequel #9 and having lost Doug Bradley as their lead baddie a few films ago. The big change? A woman is playing hell’s favorite demonic priest. Now, it seems this is the type of thing that people get all bent out of shape about these days, but I’m here to tell you, it works. It works well. Jamie Clayton, who plays the character officially titled “The Priest” but we know better as Pinhead, delivers a chilling and downright terrifying take on the character.

Hellraiser 2022, which had David Bruckner behind the camera, tells a similar story as the original with vastly different details. Plenty of parallels can be made to the original characters of Kirsty and Frank, but only in their core motivations. This version opens with a young man at a bourgeois party, complete with cocktail trays and orgy rooms, at the estate of a shadowy figure named Voight. For that young man, the party goes from exciting to excruciating as he’s invited to a backroom where his host gives him a certain puzzle box to play with. He solves the puzzle and is immediately taken by the Cenobites, hell’s version of priests who deal in sensation…mostly pain. Cut to a few years later and we meet up with our heroine, Riley. A recovering addict who’s living with her brother and his boyfriend. After one too many lectures Riley leaves her brother’s house and goes to see her 12-step met boyfriend Trevor who has an idea on how to make some quick cash. All they have to do is rob a storage unit that’s been left abandoned. When said robbery is complete, the only thing they have to show for their trouble is a small, cube-shaped golden box. A golden box that leads them down a path to hell.

Personally, I think this story was a vast improvement on the original. Let’s be honest, the first Hellraiser was only heralded for it’s amazing effects in the gore department and the unforgettable Cenobites. You take those two things away and you have a poorly-acted soap opera. This story is deeper, without taking itself too far from its goal, not to mention the storyline has had themes of addiction and abuse at its core from day one…so making your lead suffer from those same things in the human world only makes sense. Odessa A’zion, who plays Riley, has such an oddly enchanting look that I found myself locked into what was happening on screen even when the story was running at it’s lowest. Films like this usually have B-level performances, at best, but I was beyond happy to see that every single member of the principal cast came with their A-game. Are they going to be Oscar winners from this? No, but the effort shows and it makes the film that much more believable. Nothing can pull you back to reality than a crappy horror film performance, of which there are none to be seen here.

The villains this time around are familiar and new, all at the same time with one new addition particularly striking. We’ll get to the Cenobites in a minute but I have to address the new star of the show, Voight’s estate. This is such an awesome set piece. The film begins here and it’s not long before the main cast’s story leads them back to this place. A classic Hampton’s like mansion, with some key additions. The outside of the home has a steel exoskeleton that resembles the pattern work you’d see on the lament configuration (Pinhead’s box). Once inside the place just gets more terrifying with all the locking gates, secret passages, and sex dungeon’s you’d expect. It’s not long before you begin to realize this whole place IS a copy of that cube that brings hell with it.

Now for the part, we’ve all been waiting for, the Cenobites. As I mentioned before Jamie Clayton’s take on the iconic Pinhead more than does the job. It’s not Doug Bradley, but no one can be. Honestly, I like the idea of it being female as the cenobites seem to transcend gender and the androgynous look that results from the mixture of styles is perfect. Her posse brings the old with the new bringing back the chatterer (the most unnerving of the group if you ask me) and adding in ‘The Gasp’, ‘The Asphyx’ and ‘The Weeper’ each a unique perversion of humanity that brings their own angle of horror to the mix. Now, for those fans of the original coming to play with this reboot I will give one warning. If you were in it for the gore you may be disappointed. Don’t get me wrong, this is by no means a PG-13 attempt at the film, there’s plenty of blood and bodies on meat hooks, but if you compare it to the original what you get here is somewhat tame.

Hellraiser is that odd reboot that delivers what made the original special while adding to the lore and making it accessible to a wider audience. Again, gore hounds may be disappointed but I think that sacrifice is worth it to allow for a wider, less strong-stomached, audience to sit down and enjoy.

In “Hellraiser,” a young woman struggling with addiction comes into possession of an ancient puzzle box, unaware that its purpose is to summon the Cenobites, a group of sadistic supernatural beings from another dimension.