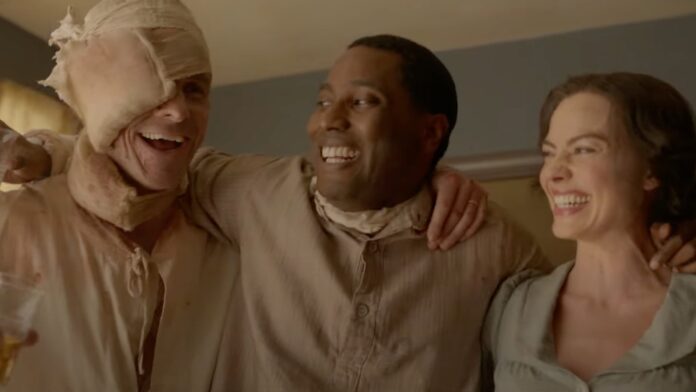 “A lot of this really happened.”

That’s how David O. Russell chooses to open his latest, overstuffed political caper, Amsterdam. Like American Hustle before it, Russell weaves fact and quite a lot of fiction into a starry mish-mash, as much of a slog as it can be wildly entertaining, especially for those familiar with the little-known attempt to overthrow the U.S. government at the story’s core. But in telling this already-complicated Bonus Plot tale, Russell has complicated it even further with a slew of wacky and pointless characters, flashbacks, and more to the point that one has to dig to find the entertainment value.

Despite Russell’s penchant for comedic chaos, Amsterdam is best when simplified to the trio of best friends at its core. Chrisitan Bale, Margot Robbie, and John David Washington play three Americans, survivors of the Great War who form a lifelong bond to protect one another. Bale’s Dr. Burt Berendsen, sent over to fight by his disapproving wife (Andrea Riseborough) and in-laws, befriends Washington’s Harold Woodsman, a Black soldier who refuses to be humiliated while fighting for his country. Both are badly injured on the battlefield, with Burt missing an eye and much of his face and Harold with bad facial damage. Fortunately, they fall under the care of Robbie’s “French” nurse Valerie Voze. She nurses them back to health, but they develop more than just a doctor/patient relationship. They become inseparable, living a fast and carefree life in Amsterdam, creating art (Valerie makes pieces of the shrapnel remnants), having hush-hush meetings with a pair of bird-watching espionage agents (Michael Shannon and Michael Myers, both really odd casting choices), and ignoring their pasts. Of course, it all eventually catches up to them and they split, back to the hum-drum of the present, 15 years later.

Burt and Harold are still friends, both looking out for other veterans in different ways. Burt runs a somewhat shady hospital offering experimental drugs and prosthetics, while Harold is an attorney. Chris Rock plays an irritating former soldier and Harold’s colleague, there only to shout about the dangers of Black people getting mixed up with whites. It grows old very quickly. The two get wrapped up in the apparent murder of their former commander (a ghostly Ed Begley Jr.), only to get accused of murder themselves. This brings them back into Valerie’s orbit, as she’s connected to high society and could have the means to get them off the hook. Or not.

Russell ramps up the craziness in just about every way, with each newly-introduced character pushing it up a notch. The humor, some of it well-calibrated and others misjudged by a mile, comes from this trio of oddballs mixing it up with polite company who represent all of the levers of power, from wealthy socialites to businesspeople to governmental figures. The cast is having quite a lot of fun in these minor supporting roles, as well, with Rami Malek and Anya Taylor-Joy having a blast as Valerie’s well-to-do brother Tom and his wife Libby. During the 15 year gap, they’ve been keeping Valerie drugged and shut indoors for purposes best left discovered in the film. However, when Valerie lays eyes on Harold, it’s like they were never apart. All of the romantic feelings come rushing back, even if the chemistry between Robbie and the blank slate Washington is dubious. Seriously, Washington is a fine action actor but he lacks the expressiveness of his Old Man. Robbie, on the other hand, is luminous and, clearly informed by her multiple Harley Quinn performances, such a natural at screwball comedy. Bale jumps in with both feet as the disheveled, scraggly Burt, his glass eye a sight gag unto itself.

Russell clearly sees parallels between the past and today’s renewed march to fascism. Some of the characters in Amsterdam are based on real figures, and your knowledge of that history will enhance any enjoyment. Robert De Niro’s General Gil Dillenbeck, a respected war hero who others are trying to manipulate for nefarious ends, is based on the “Maverick Marine”, Smedley Butler, who at the center of a plot hatched to overthrow the democratic government in place of a dictatorial regime. Sound familiar? We forget just how much popular support here in America there was for Hitler back in the 1930s (see pilots Charles Lindberg and Laura Ingalls), and Russell seeks to inform without hammering the message too heavily.

With beautiful era-specific production and costumes, Amsterdam looks every bit the classic caper, with some scenes appearing to have been drawn directly from the history books. As a mystery, there isn’t much to lean into with the exception of one major twist involving undoubtedly the biggest star in the movie, but promos have mostly focused on this as a Coen Brothers-esque comedy. Amsterdam could be seen as Russell’s most ambitious film, but also his most convoluted, and ultimately most hopeful. For that last reason alone it’s a more watchable film than the one-and-done stuff he’s done previously. But also Russell is finding reason to trust in the power of true friendship and patriotism to win the day when evil strikes. It might take a circuitous, somewhat unfocused route to getting there, but that’s a lesson worth learning at a time like this.