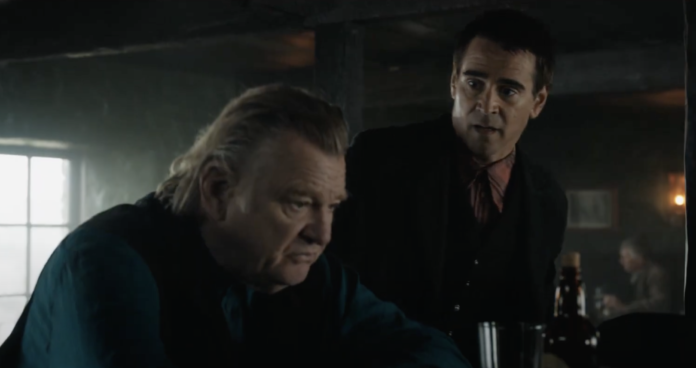 Feuds are funny things. No, really, in Martin McDonagh’s hilariously dark The Banshees of Inisherin, a feud sparks laughter as well as grim reflection in one amazing package. The thing about feuds, they’re like little wars that just keep on going and going, so long that both sides might eventually forget how they started. Colin Farrell and Brendan Gleeson are engaged in just such a feud in McDonagh’s follow-up to Three Billboards, and watching the twists and turns of this battle takes is a roller coaster of emotions the likes of which will be very hard to shake.

Set in 1923 on the Irish isle of Inisherin, a pair of best friends have suddenly called it quits. Well, not quite. Pádraic (Farrell) has no idea why his pal and drinking buddy Colm (Gleeson) suddenly refuses to be friends. It’s more than that. Colm won’t even speak to Pádraic, and doesn’t to be spoken to, either. Pádraic can’t figure it out. What did he do to offend? Sure, he’s not so great when he drinks, but Pádraic is a pretty happy-go-lucky guy, one of “the good ones” he keeps being told. But it’s not so simple. Colm, who is older and has artistic pursuits that Pádraic can’t even fathom, just wants to spend what time he has left putting something that’s lasting out into the world. In a harsh, unforgiving place like Inisherin, who can blame the guy? Oh yeah, and Colm threatens to slice off a finger from his violin hand every time Pádraic speaks to him.

Seems a bit harsh, right? But then, nothing on Inisherin is easy. The people certainly aren’t. They’ve been molded and shaped by the rocky terrain, the hopelessness, the sounds of the Irish Civil War booming from across the waters. There’s nothing in this place. How can even the nicest of people withstand being beaten down by the elements, like a stone constantly pounded by the waves?

I know this all sounds incredibly grim and who the Hell would want to watch this? But trust in McDonagh, who since he first paired Farrell and Gleeson for In Bruges has always found the funny and charm in even the darkest of scenarios. Inisherin has more than its share of characters you’ll want to spend more time with. There’s Pádraic’s lonely, quick-witted sister Siobhan (Kerry Condon, amazing), and Barry Keoghan as town idiot Dominic. One of the funniest conversations, of which there are many, involves Pádraic trying to gauge the distance between Dominick’s stupidity and his own. You’ll also find aggressive cops, gossiping store clerks, a dancing mule, and perhaps even a banshee.

A microcosm of the Irish Civil War, Pádraic and Colm’s conflict begins small but soon consumes everyone and everything. In such a small town, avoiding one another is impossible. It also creates an echo chamber, and internalizing the worse things others say about you is inevitable. Pádraic is a good egg, being “one of life’s good guys” is a badge of honor in a place like Inisherin, until it starts to take a darker meaning. When the few good things get burned away in the fires of war, what’s left for those who were clinging to those things as a life line?

In Bruges really set the bar high for this Farrell/Gleeson reunion, and they absolutely exceed all expectations. Farrell, in particular, has never been better. His Pádraic is heartbreaking and tragic; you just want to root for the guy to withstand Inisherin and not succumb to it. Pádraic is such a simple man he doesn’t see everything and never will, but when he hits on an observation it’s on the money and so funny. Gleeson’s Colm is more thoughtful, with moments of compassion emerging right alongside the bitterness. The look on Colm’s face every time his peace is unbelievably disturbed, despite his promises, is priceless.

What they say about a thin line between love and hate is true. Most long-standing feuds began from a place of love. And whikle things may get heated and cross the point of no return, moments of compromise and tenderness can occasionally break through. But these moments, as well-meaning as they might be, can be just as painful for the hope they offer that is often fleeting. A darkly comic masterpiece, The Banshees of Inisherin is a lot like the isle from which it is set; on the outside it is merciless and intimidating, but go a bit further and what you’ll find is humor and a surprising amount of warmth.

The Banshees of Inisherin opens in theaters on October 21st.