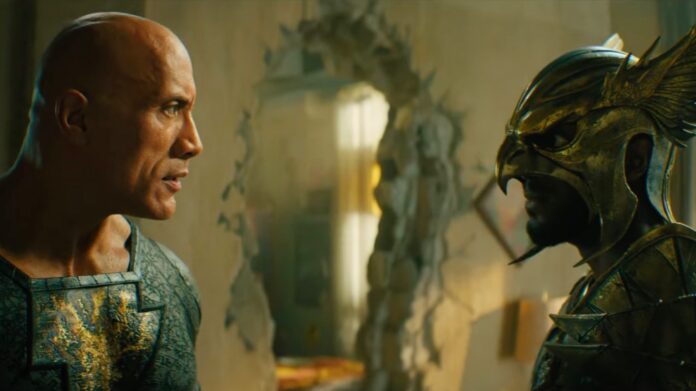 Dwayne Johnson remains the top superhero on the block. Black Adam held surprisingly well, only dropping 59% in week two for $27.7M and a $111M domestic haul. Overall, the film has $250M worldwide which is pretty good. Warner Bros. Discovery will want it to get as much room as possible before Black Panther: Wakanda Forever shows up in a couple weeks and kneecaps everything.

George Clooney and Julia Roberts have a wedding to break-up in an exotic locale. That’s quite the selling point of a story, and audiences continued to scope it out. Ticket to Paradise fell just 39% in its second week and earned $10M, grabbing $33M and bringing the worldwide total to $119M. Not bad at all for the $60M rom-com.

A slow start for exorcism flick Prey for the Devil, which opened to just $7M. It was a slow week in general, but compared to the other big horrors recently such as Smile, Barbarian, and Halloween Ends it’s pretty disappointing. This is spooky season, after all. But to be fair, this was a film that wasn’t nearly as high-profile. There are no big names at all in this film about the Vatican’s first female exorcist and her spiritual battle against an evil demon. I saw it over the weekend and enjoyed most of it, finding it to be better than the 17% Rotten Tomatoes score suggests.

It’s been so long since I reviewed Till that I forgot it had yet to enter wide release. The film expanded to just over 2000 theaters and earned just $2.8M. I’m not going to criticize. Overall, the movie is average outside of the stellar and likely Oscar worthy performance of star Danielle Deadwyler. But I also think that audiences aren’t in the mood for Black trauma movies right now, and are looking for something more heroic like The Woman King or Black Panther: Wakanda Forever. Am I wrong in feeling that way?

Also riding a wave of lead performance Oscar buzz is Tár, which expanded to over 1000 theaters. Cate Blanchett is justifiably expected to earn yet another Oscar nomination for her performance in the sprawling drama about a classical composer/conductor during a whirlwind period of scandal. This one is essentially for the art house crowd and the completist cinephiles. I don’t expect it to grow much beyond where it is now, regardless of how good it is.