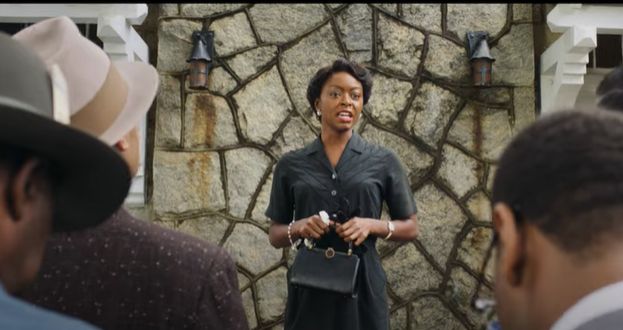 I’ve been grappling with Till for a couple of weeks, trying to untangle my thoughts on director Chinonye Chukwu’s stirring drama about a nightmarish chapter in American history. There was a big part of me that felt this story can’t be told in any way that’s satisfying. We know of the horrific 1955 murder of Emmett Till while he vacationed with family in Mississippi, and the impact of his mother Mamie Till-Mobley (Danielle Deadwyler) as she forced America to look at the savageness of the crime, invigorating the Civil Rights movement. And I came to the conclusion that this film does not exist to be satisfying, and certainly not to entertain, but to keep the Till story present and alive at a time when so many are trying to disappear black history because it makes certain people (likely guilty racists) uncomfortable.

That is a noble effort, and Chukwu clearly recognizes the challenge at hand. There will be no happy endings here. So the best thing to do is to lean into how difficult the story is because it should be difficult. Those who are most uncomfortable should be made to feel that way. And while Till accomplishes those things, and features arguably the finest single lead performance of the year, it’s not without a few problems that keep it from being an outright success.

The murder of Emmett Till hangs like a dark cloud over the opening segments. We’re introduced to the vibrant Chicago kid Emmett (Jalyn Hall, great), and the loving, playful relationship he shares with Mamie. He’s an outgoing one, but not without a nervous stutter. He also has no idea what it’s really like down South. There’s racism in Chicago, as he experiences first hand, but nothing like in Mississippi. Mamie knows it all too well. It’s why she left and raised Emmett, who she calls “Bo”, up north. When it’s suggested he should go to Mississippi to experience life down there with relatives, Mamie is rightfully terrified. She instills in him the lessons that so many of us Black men were taught as children: keep your head down, your mouth shut, and stay out of white people’s way. Mind your own.

Chukwu and her co-writers make some brave choices regarding the events leading up to Till’s murder, because some facts are still in dispute. Till doesn’t take it seriously enough his new surroundings, which puts his cousins and uncle at an unease. The actual event that  sparked his murder, an encounter at a store run by Carolyn Bryant (Haley Bennett) is due to a too-familiar comment made by Till. In truth, it’s unclear what caused it. In a starker truth, and the reason Chukwu did this, is that NOTHING he could’ve done would justify what happens to him. Whether he “wolf whistled” at her, compared her to a famous actress, or claimed to have bed other white women, Till did not deserve what happens in the dead of night. Here, when Bryant’s husband and others come storming into his uncle’s house to kidnap the boy, Chukwu includes other Black people who assisted in the crime.

The murder itself is, gratefully, never seen. But we hear it from a distance, which is almost worse because so much is left to the imagination. Chukwu and her team carry on the torch lit by Mamie, showing the open casket remains of her murdered young son. It’s unbearable to look at, even as a reproduction. But you simply couldn’t make an honest movie about Emmett Till without doing proper justice to the courageous choice Mamie made. She was going to make America see what it had done to her boy. The moment is as powerful as anything you’ll see all year.

Deadwyler, who might be unrecognizable to those who first saw her in last year’s The Harder they Fall, is the model of poise, and grace, and sadness, and righteous fury. It’s a delicate balance she pulls off as Mamie, who transforms from a grieving mother to a reluctant then enthusiastic activist. Others flock to her cause, including the NAACP and the late great Medger Evers (Tosin Cole), adding to the enormity of this moment in history.

While Till can feel a bit too tidy for a Southern drama, the production design and costuming are impeccable. As the film evolves into a mother’s quest for justice and a courtroom battle, Deadwyler steps up and delivers a powerhouse portrayal in every facet. She’s always the best aspect of every single scene, even when the screenplay lets her down. Because we, unfortunately, know there will be no happy ending, the film often is like it’s going nowhere fast to delay the inevitable let down. While Chukwu and Deadwyler’s passion is undeniable, Till isn’t always moving with the same vigor. An epilogue explaining how little has changed in Mississippi (the Brett Favre and water scandals for example), or an update on Carolyn Bryant’s current situation, feels like it should’ve been included.

Till opens in theaters on October 14th.