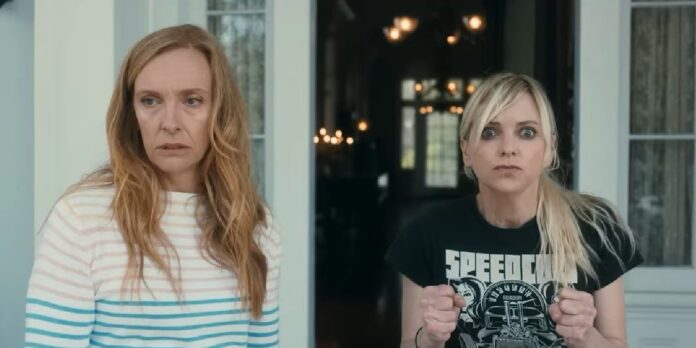 Toni Collette, Anna Faris, and Kathleen Turner. With three women of such rich comedic talent is there any way The Estate can go wrong? Add to that its arrival from writer/director Dean Craig, who wrote both versions of Death at a Funeral and dark comedic tone that is in keeping with those memorable comedies.

The film stars Collette and Faris as siblings who are attempting to worm their way into the will of their dying, and not very well-liked aunt, played by Turner. Of course, they aren’t the only family members who emerge out of the woodwork to get in on the potential riches. David Duchovny, Rosemarie Dewitt, and Ron Livingston join in the fun.

This is Craig’s first film behind the camera since Netflix’s 2020 rom-com Love Wedding Repeat, and after a career mostly spent penning screenplays he’s getting more comfortable behind the camera.

The Estate opens in theaters on November 4th.

Two sisters attempt to win over their terminally ill, difficult-to-please Aunt in hopes of becoming the beneficiaries of her wealthy estate, only to find the rest of their greedy family members have the same idea